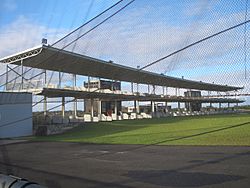 Barden Ridge is a suburb in southern Sydney, in the state of New South Wales, Australia. Barden Ridge is located 29 kilometres south of the Sydney central business district in the local government area of the Sutherland Shire. Barden Ridge is colloquially known to locals as 'The Ridge'.

Barden Ridge is located on the Woronora River, which flows north into the Georges River. 'The Needles', is a body of water (fjord) on the Woronora River, on one of the original roads west from Helensburgh. On the northern side of the fjord lies the fresh water source of the Woronora River, whilst on the other side is salt water. The water, between two steep hills, remains so cold that even during summer it has been known to have caused heart attacks. While car access has been generally blocked, pedestrian access is still available. This area is also popular for recreational activities such as hiking and mountain biking.

Barden Ridge has shifted from a remote bushland area, when known as Lucas Heights, to an expanding suburb that now contains all the necessary amenities that have established a strong community.

Barden Ridge was named after Alfred Barden, whose pioneering family is associated with the Bangor area prior to the 1850s. In early times Barden Ridge had been used to identify the geographical location and Lucas Heights was given to the suburb that developed here.

The land was originally home to the Dharawal People.

The area has faced several extreme bushfire incidents, with the most notable evacuation occurring in the early 2000s.

According to the 2016 census of Population, there were 4,329 residents in Barden Ridge. 83.0% of people were born in Australia. The next most common country of birth was England at 2.8%. 85.0% of people spoke only English at home. The most common responses for religious affiliation were Catholic 29.9%, Anglican 22.9%, No Religion 16.9% and Eastern Orthodox 5.0%.

The nearest train station is at Sutherland on the Sydney Trains Illawarra line and South Coast lines. There is also another close railway station at Padstow, New South Wales. Transdev NSW, formerly Veolia and Southtrans, operates the local bus service.

In 2005, the Bangor Bypass was completed. It takes motorists directly from Sutherland to Barden Ridge, instead of passing through Menai and Bangor. A new section of the Bypass was constructed and passes by Barden Ridge improving the current access to the area and Heathcote Road (to the south).

The Ridge Sports Complex is a major sporting facility on the western side of New Illawarra Road. It features playing fields and associated amenities buildings, netball courts, men's shed, dog park, BMX track, synthetic athletics track, a golf driving range, The Ridge Golf Course, and club facilities to service the needs of the sporting and golfing community. Also planned for this area are hockey fields.

There is also another Baseball/AFL oval and a park directly adjacent to Lucas Heights Community School, which itself has two sporting fields and three basketball courts. Shire Christian School also has a sporting field and two multi-use tennis courts. There are other parks and nature reserves scattered throughout the suburb.

The suburb is home to the Barden Lodge Retirement Home.

All content from Kiddle encyclopedia articles (including the article images and facts) can be freely used under Attribution-ShareAlike license, unless stated otherwise. Cite this article:
Barden Ridge, New South Wales Facts for Kids. Kiddle Encyclopedia.