Blue Water High is an Australian television drama series, broadcast by the Australian Broadcasting Corporation on ABC1 and on Austar/Foxtel Nickelodeon channel in Australia and on various channels in many other countries. Each season follows the lives of a young group of students at Solar Blue, a high-performance surf academy where several lucky 16-year-olds are selected for a 12-month-long surfing program at Avalon Beach, Sydney.

There are three series in Blue Water High. The first two series were screened in 2005 and 2006 and the producers did not intend to create a third and final series. However, due to popular demand by fans, they relented and made one more series with only Kate Bell returning in a main role. Series three ended with the closure of Solar Blue because of a lack of funding, indicating that the show would most likely not continue.

The first series consisted of twenty-six episodes. It starred Adam Saunders as Heath, the relaxed joker who struggles with school; Tahyna Tozzi as Perri, resident glamour queen from the Gold Coast; Sophie Luck as Fly, the youngest; Kate Bell as Bec, the local; Khan Chittenden as Edge, the aggressive and competitive teenager; Chris Foy as Matt, the generic 'smart guy' and Mara Scherzinger as Anna, a famous German Kiteboarder. At the end of the year, two of them (one girl and one boy) get a wild card spot on the pro-circuit tour. The first series was released on DVD in 4 volumes, though fans are strongly urging for a complete re-release featuring the entire season in one package as was later done with Series Two. Sophie Luck won the 2005 Australian Film Institute Award for Best Young Actor for her role in the series. The winners for series one were Fly and Edge.

Filming of a second series began in early January 2006 in Sydney, with a revised cast, which included Sophie Luck who was back as Fly, Adam Saunders as Heath, who leaves in episode six and Trent Dalzell as Corey, Ryan Corr as Eric, Lesley Anne Mitchell as Brooke, Taryn Marler as Rachel, Gabrielle Scollay as Amy, and James Sorensen as Mike. It premiered on 28 June 2006. Sophie Luck, Adam Saunders, Kate Bell, Chris Foy, Tahyna Tozzi, Nadine Garner and Khan Chittenden have all reappeared in the second series in various episodes. The winners of Series Two were Brooke and Eric.

The complete second series was released on DVD in Australia on 1 October 2007.[1]

The winners are Bridget and Adam, but Bridget decides to go to university instead of joining the Pro Circuit, so Loren gets the wild card after Cassie literally 'draws the short straw' (as they both have the same number of points in the final surf-off so they decide who gets the wild card this way). In the last episode, Simmo makes a surprise return as one of the three judges in what is described as "one of the best finals Solar Blue has seen", saving the day as he pulls "not a rabbit out of a hat, but an elephant", ensuring that the winners of the final surf-off still get a wild card invitation. 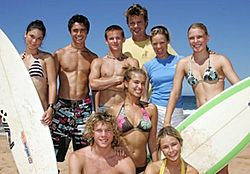 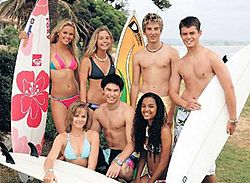 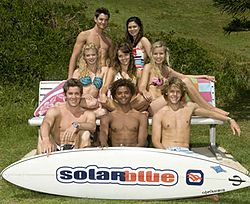 Episodes of season 2 were not named but were numbered from 1 to 26.

Episodes of season 3 were also not named, but were numbered from 1 to 26.

In Germany, the series is called Blue Water High, die Surf-Akademie (which means "Blue Water High, the Surf Academy") and is broadcast on KI.KA (a children's channel). In Ireland Blue Water High was broadcast on RTÉ Two as part of The Den and, in Spain, the show was broadcast on La 2, Clan TVE and Neox. In France, it was broadcast on Filles TV as Blue Water High: Surf Academy in 2007 and France Ô has started reairing the series on 12 November 2012. In Norway the show aired on TV 2 Zebra. In Portugal, SIC also bought the first season, and it aired in the country from Monday to Friday at 5pm in Summer 2009; the show was named Mar Azul ("Blue Sea"). It also started again on SIC K in December of that year. The series also began airing on RTL 8 in the Netherlands from 2009 onwards. In the UK, it was broadcast on Boomerang and later on Pop Girl. In Portugal the serie is called "Mar Azul" (Blue Sea) and it was first aired on Teenbox a teen program on the TV Channel SIC, Saturdays and Sundays, the three seasons aired, and then the TV show was trasnfered to the teen channel of SIC, called SIC K, and since then it's aired frequently, even with some time interval, the serie is aired till today, 2019.

Blue Water High was broadcast on the internet in North America through the former The WB Television Network, which was resurrected by the Warner Bros. television arm as a website in 2008.

All content from Kiddle encyclopedia articles (including the article images and facts) can be freely used under Attribution-ShareAlike license, unless stated otherwise. Cite this article:
Blue Water High Facts for Kids. Kiddle Encyclopedia.