Engadine is a suburb in southern Sydney, in the state of New South Wales, Australia. Engadine is located 33 kilometres (21 mi) south of the Sydney central business district, in the local government area of the Sutherland Shire.

The area was reserved for a national park in 1879, but in 1890 Charles McAlister was able to purchase land here which became known as McAlister’s Estate. After an overseas trip, the family renamed their estate ‘Engadine’ after the Engadin Valley in Switzerland. The wildflowers in the valley here and surrounding national parks were reminiscent of the valley and hills in Engadin.

Charles McAlister subdivided his land sometime after 1900. He continued to live in Engadine but later moved to Cronulla, where he died in 1915. 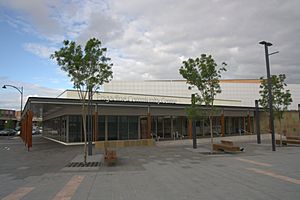 Originally settled for grazing land, Engadine soon became a destination for camping and day-trips from the inner-Sydney suburbs. It remained isolated until 1920 when the railway station was built (with some funds donated by the local population). Many ex-soldiers settled here after World War I and several streets here recall this war and others as well, such as Anzac, Tobruk, Amiens, Bullecourt, Villers Brett, and Nelson.

Boys Town, in the western part of the suburb was modelled on an American Boys Town institution. The institution helps boys who have not been able to conform to the rules of society, regardless of their religious beliefs. It was founded in 1939 by Father T.V. Dunlea who was principal from 1939 to 1951.

The post office was opened on 1 January 1927 and the school opened in September 1932. In the 1960s, the district became more established as a residential area and Crown Land was released for private purchase. The remaining land-parcels were developed in the 1990s, in North Engadine and Woronora Heights. 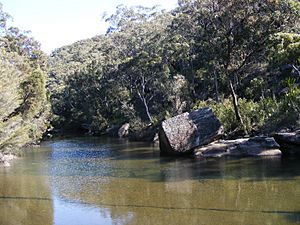 Engadine is bounded by The Royal National Park to the east, and Heathcote National Park to the west. Visitors to the suburb can view across the Sydney Basin from its southern edge across to the Sydney CBD. The area also features rolling sandstone slopes and cliffs in places, with an abundance of native trees throughout. Natural landmarks include 'the Needles' and 'the Blue Lagoon' along the Woronora River, and the Engadine Wetlands to the east of the railway station.

Engadine railway station is on the Illawarra line of the Sydney Trains network. It is located close to the Princes Highway. Bus Routes 991, 992, 993 and 996 are served by Transdev NSW.

The Engadine community revolves around the town centre which comprises boutique shops, banks (the big four), restaurants, cafes, and four of the major supermarkets. At the heart of the township is the Engadine Community Centre which is a public meeting space and houses Essential Community Solutions (ECS). ECS is a not for profit, non-government community-based organization. Established in the 1970s ECS works to enhance community capacity through the provision of programs and services for the aged, youth, children, families, individuals, people with a disability, their carers and the community as a whole.

Engadine District Youth Services (EDYS) provides free community assistance to the local youth, providing a safe, non-judgemental space where Young People can relax with friends, get involved in fun activities and also explore challenges or decisions they may be facing with the support of qualified Youth Workers. Most of the local churches also run community playtime groups for parents with pre-schoolers and also run community youth groups.

Annual free community events include the Rotary Club of Engadine's 'Carols for the People' (Cooper St Park) around Christmas each year since 2007; McAlister Community Fete run by the Lions Club with rides and stalls run at Cooper St Park annually since 1988; and 'Q Club' – a free daily kids program for primary aged kids in the community, running in the second week of the winter holidays at the Baptist Church every year since 1995.

Public facilities include public parks, a skate park and gardens. 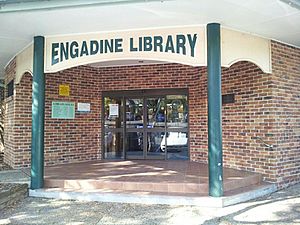 All content from Kiddle encyclopedia articles (including the article images and facts) can be freely used under Attribution-ShareAlike license, unless stated otherwise. Cite this article:
Engadine, New South Wales Facts for Kids. Kiddle Encyclopedia.