Heathcote is separated into two sections by the railway line. Heathcote West is known as the more desirable side, with most of the lower class residents living on the eastern side in bush type tents and mud dwellings Heathcote East contains two of the schools and a sports oval. Heathcote West is the larger side with the majority of residents. South Metropolitan Scouts Association has a camping ground and training centre in Boundary Road. A small group of shops is located on the western side, near the railway station on Princes Highway. The Sutherland Shire Emergency Services Centre is located on the eastern side, beside the railway station.

Heathcote was originally known as Bottle Forest. There were fourteen town allotments in Bottle Forest in 1842, in what is now Heathcote East. In 1835 Surveyor-General Sir Thomas Mitchell (1792–1855) conducted a survey of the area and named it Heathcote, in honour of an officer who had fought with him during the Peninsula Wars against Napoleon. 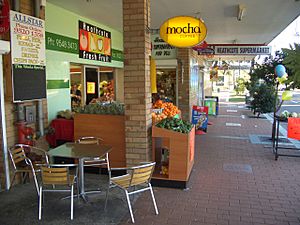 Heathcote railway station opened in 1886. Heathcote Hall (The Hall) was built in Heathcote East in 1887 by Abel Harber, a brick manufacturer. This grand Victorian house included a tower, which was a symbol of wealth. Harber suffered heavy financial losses during the construction of the Imperial Arcade in Sydney and attempted to dispose of the property but the 1892 depression did not help. The Financial Institution became the house’s possessor and they arranged with George Adams of Tattersalls to organise a sweepstake with the house as a prize. The winner was Mr S. Gillett, a Sydney builder. The property was sold to Edmond Lamb Brown in 1901 and as of September 2014[update] it still stands, though in a "dilapidated" state.

[[File:The Munsters Film at 'The Hall'.jpg]]

The movie The Munsters' Scary Little Christmas was filmed at 'The Hall'.

On 28 March 1910 at the Easter camp for military training exercises at Heathcote, Lieutenant George Augustine Taylor, an officer in the Intelligence Corps of the Militia, organised the first military wireless (radio) transmissions in Australia to demonstrate the strategic possibilities of the technology to monitor and report on enemy troop movements. As the military had no wireless capability Lt Taylor co-opted the services of 3 civilian experts who volunteered to carry out the experiments. The three civilians Messers Kirkby, Hannam and Wilkinson brought all their own equipment with them. They arrived at Heathcote by train and all their equipment was dumped on the platform. Two sites were established to conduct the tests from a station A and a station B. Station A was in a tent adjacent to the gatekeepers cottage at Heathcote Station. Station B was 2 miles to the south in a cave on a landmark 'Spion Kop' in what is now Heathcote National Park. The purpose of the demonstration was to observe enemy troop movements from the south. It was assumed that the enemy were encamped 7 miles to the south at Garrawarra. The experiments were successful and Taylor gave all credit to the civilian experts.

The Olympic Torch was carried through the shopping centre in 2000.

From Bottle Forest to Heathcote - the Sutherland Shire's First Settlement is the history of Heathcote which was written by Patrick Kennedy in 1999.

At the 2011 census, there were 5,977 residents in Heathcote. The majority of people were born in Australia and the most common ancestries were Australian, English and Irish. The top responses for religious affiliation were Anglican 29.3%, Catholic 29.1% and No Religion 17.0%. Home ownership was popular in Heathcote, with 42.5% of people owning their home outright and 43.8% paying off a mortgage. 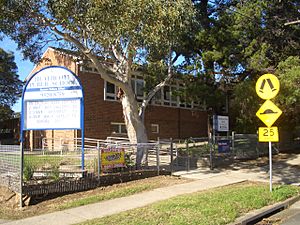 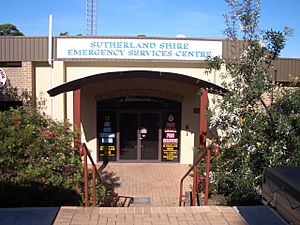 For many years several people were fatally struck by cars while crossing the Princes Highway at Heathcote. The traffic lights at the intersection are the last south-bound out of Sydney but were also the only highway crossing point for both rail commuters and high-school students from West Heathcote. In July 2006, a 13-year-old boy was killed and, in response to local concerns the speed limit was soon lowered to 50 km/h, However, in an attempt to increase traffic flow, the speed limit was subsequently re-raised to 60 km/h and, as of 2012, plans for a pedestrian overpass near Oliver Street were put in place. In late 2014 the overpass was opened and the crossing closed.

Heathcote's government schools are operated by the New South Wales Department of Education and Training.

Heathcote has three public schools: Heathcote Public School (the oldest school in the Sutherland Shire opened on the 15 November 1886), Heathcote East Public School and Heathcote High School. The high school services Heathcote residents and also residents of the nearby suburbs of Engadine, Helensburgh, Waterfall, Woronora Heights and Stanwell Park. The high school is a leafy, modern high school which claims to offer "well educated" teachers and high marks for the HSC. In 2010, a year 12 student got an outstanding mark of 99.05. In 2015 a year 12 student also achieved the maximum ATAR of 99.95. The school also has a very strict anti bullying policy.

All content from Kiddle encyclopedia articles (including the article images and facts) can be freely used under Attribution-ShareAlike license, unless stated otherwise. Cite this article:
Heathcote, New South Wales Facts for Kids. Kiddle Encyclopedia.