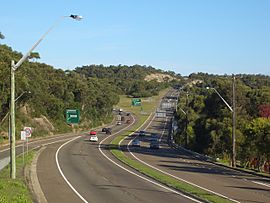 Waterfall is a small suburb in southern Sydney, in the state of New South Wales, Australia. It is 38 kilometres south of the Sydney central business district in the Sutherland Shire.

Waterfall is bordered to the north by the suburb of Heathcote, with Engadine further north; by The Royal National Park to the east; and by Heathcote National Park to the west. Helensburgh is the next town, travelling south. Waterfall marks the southern border of the Sutherland Shire. It is approximately 200 metres above sea level.

Waterfall has only six streets. Its local school has only two rooms which have kindergarten to 2nd class in one room, and 3rd class to 6th class in another. The bushland gives the small suburb a natural surrounding and walking tracks lead from it into the neighbouring national parks. To the west is a dammed lake and behind it is Mount Westmacott.

Waterfall was a town created by rail workers, who built the line from Sydney to Wollongong in the late 19th century. It is the highest point on the line, with a steep rising gradient at one end, and a falling gradient at the other end, and sidings were provided in both directions to allow freight wagons to be stowed and shunted. Waterfall derived its name from the waterfalls close to the railway station. McKell Avenue, the southern border of the Royal National Park, was originally called Waterfall Road.

The Waterfall State Sanitorium was established in 1909 for the treatment of tuberculosis patients. In 1973 Australia's first Community Advanced Driver Training Centre was opened in Waterfall but closed a few years later.

The Waterfall train collision on 20 December 1994 involved two S-set electric trains which collided in the early hours of the morning during a shunting procedure at Waterfall station in the south of Sydney. Both trains were empty of passengers. Carriages jack-knifed in spectacular fashion onto the platform, causing demolition of a concrete ramp and part of the station canopy.

The Waterfall train disaster on 31 January 2003 involved an interurban train service operated by unit G7, which crashed just past Waterfall. The cause of G7's crash was determined to be the heart attack of the driver and a failure of the safety equipment and the guard to stop the train.

Waterfall is the last suburb heading south on the Princes Highway before it leads into the Princes Motorway (formerly known as the F6 freeway) to the city of Wollongong.

Waterfall railway station is the terminus for the Sydney Trains suburban Eastern Suburbs & Illawarra Line. However, some trains do terminate one stop further on at Helensburgh. Waterfall is also a stop on the NSW TrainLink South Coast Line, with platform 1 to Sydney terminal, platform 2 to Port Kembla, Dapto and Kiama.

All content from Kiddle encyclopedia articles (including the article images and facts) can be freely used under Attribution-ShareAlike license, unless stated otherwise. Cite this article:
Waterfall, New South Wales Facts for Kids. Kiddle Encyclopedia.