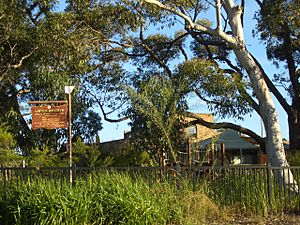 Loftus is a suburb, in southern Sydney, in the state of New South Wales, Australia. Loftus is 29 kilometres south of the Sydney central business district, in the local government area of the Sutherland Shire.

Loftus is a residential suburb with a bushland atmosphere, adjacent to the Royal National Park that flanks Sydney's south-eastern boundary. The western border is formed by Loftus and Fahy Creeks. Prince Edward Park and Woronora Cemetery form the northern border.

Loftus was named after Lord Augustus William Frederick Spencer Loftus, governor of New South Wales between 1878 and 1885. The Illawarra railway line to Sutherland was completed in 1885. The next station south was Loftus Junction, which opened on 9 March 1886. The name was changed to Loftus ten years later and in 1979 the station moved to the present site.

The Tramway Museum at Loftus was created in 1950, in a large tram yard shed beside the rail tracks that ran across the Princes Highway into the Royal National Park. During the latter years of World War II this had been an army camp site, with the national park used as a training ground. The public school opened in January 1953. The official post office opened in July 1953 but closed in 1980.

The Princes Highway runs along the eastern border. Loftus railway station is on the Sydney Trains Illawarra line and serves as an interchange for Transdev NSW bus services to the area. Loftus is also home to the Sydney Tramway Museum and a tramline runs from the museum to the Royal National Park. The tramline was originally a train branch line to Audley station within Royal National Park.

Loftus has various social and sporting clubs which include:

All content from Kiddle encyclopedia articles (including the article images and facts) can be freely used under Attribution-ShareAlike license, unless stated otherwise. Cite this article:
Loftus, New South Wales Facts for Kids. Kiddle Encyclopedia.