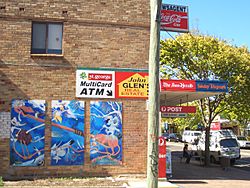 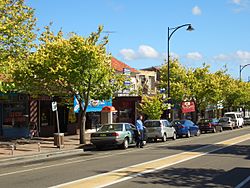 Kirrawee is a suburb in southern Sydney, in the state of New South Wales, Australia. Kirrawee is located 25 kilometres south of the Sydney central business district in the Sutherland Shire. Kirrawee lies between Sutherland, to the west, and Gymea and Grays Point, to the east. Kirrawee's southern border is formed by The Royal National Park, while Kareela and Jannali form the northern border.

Kirrawee is split between commercial and residential areas. Approximately 50% of the area to the north of the train line is occupied by commercial and industrial properties, while almost all of the area south of the train line is residential. South Kirrawee, which extends from the train line in the north to the Royal National Park in the south, has many houses on quiet roads with beautiful bush outlooks. North Kirrawee is predominantly a commercial/industrial zone containing small to medium-sized factories housing local businesses. It is also home to a number of petrol stations, car dealerships and a fast food chain outlet. However, the most northerly and western sections of this part of Kirrawee are residential, with some parts also with bush outlooks.

The Sutherland Shire Council website suggests two possible origins for the name, "Kirrawee". The first possibility is that it derives from an Aboriginal word meaning 'lengthy'; the second is that it derives from a Dharawal word, "gi(a)rrawee(i)" (alternative spelling "garrawi"), which means 'place of white cockatoos' or 'sulphur-crested cockatoos'. The current signage erected by the Council uses 'place of white cockatoos' as the accepted meaning for the suburb name. The name was adopted in 1939 with the opening of the Sutherland-Cronulla railway line. A postal receiving office in the locality was known as 'Bladesville'. It operated from the home of Mrs Louisa Blade, was opened in 1909 and closed in 1915 when a letter delivery service commenced from the post office at Sutherland.

Kirrawee, and all of southern Sydney, was inhabited by the Dharawal people for up to 8,000 years prior to European settlement.

Early non-indigenous development of the area was connected to the non-indigenous development of nearby Sutherland. It was not until the 1950s that Kirrawee became heavily settled, with many families looking to resettle after World War II. Some street names in Kirrawee commemorate colonial figures connected with the Rum Rebellion: Bligh Street and Putland Close were named after Governor William Bligh, and his daughter, Mary Putland, respectively; Johnston Avenue was named after George Bain Johnston, a First Fleet lieutenant who arrested Governor Bligh; Kemp Avenue was named after Anthony Fenn Kemp, a captain in charge of government stores who was also involved in Bligh's arrest.

Kirrawee's small patches of STIF vegetation are representative of the original forest between Sutherland and Wooloware, before residential development. Although this type of forest remains, for the most part, only as heavily fragmented patches or even isolated trees surviving amongst suburban dwellings, small remnants yet survive and can be seen growing around Kirrawee - in protected sites such as Flora Street Reserve, and Pollard Park on Kirrawee main street; and in long-undeveloped sites such as the old Kirrawee Brickpit and the Telstra depot (also a former brickpit). These latter sites are now subject to urban development plans.

It is estimated that only 0.5% of the original area of STIF remains in the Sydney region, with these small remnants now protected under the NSW Threatened Species Conservation Act 1995 and the Federal Environmental Protection and Biodiversity Conservation Act 1999. The main threat to the ecological community is clearing for urban development, and the subsequent impacts from fragmentation.

Kirrawee's protected areas of STIF are used to collect seeds that can be planted as street trees or on private property to assist in sustaining the biodiversity of the area and protecting the unique flora that provides habitat for native fauna. Kirrawee's STIF reserves are largely maintained by the local council and Bushcare volunteers from the community.[1] The Sutherland Shire Council and Bushcare volunteers maintain a Plant Nursery that sells native plants sourced from local species, and its website includes a native plant selector that encourages locals to purchase and protect species suited to the local ecosystem.[2]

Kirrawee's long-disused former brick pit is a 4.5ha site just north of the main shopping village, and its future has been the source of much debate by local residents, politicians, potential developers, and media in the locality.

Used for industrial purposes between 1912 and 1979, the land was owned by various brick manufacturers, including Sutherland Brick Co, Refractory Bricks, and Punchbowl Brick and Tile Co. Sydney Water Board acquired the land in 1974 for water-storage purposes, but instead it became an equipment storage facility.

Until recent development of the site, a deep pit covered approximately 50 - 60% of the total brick pit site and measured about 230 metres long by about 80 metres wide and was about 16 metres deep. The entire site was enclosed by a cyclone fence, preventing public access. Over many years, the pit had become half-filled with water, making a natural lagoon. The remainder of the site was covered with overgrown trees and plants and had become home to many diverse species of animals, most notably bird life, which could be seen nesting and swimming on and around the water.

This site has been the subject of much controversy over recent years.

When it was evident Sydney Water had no further use for the site, the State Government proposed to sell the site to developers for use as a mix of apartments, business units, and a small park. Kirrawee Chamber of Commerce and a residents' group instead proposed that the site be turned into a performing arts centre and large park.

In 2001, a 20-month program commenced to consult with the community about the future use of the site. This project was a joint initiative between the local council, the Department of Infrastructure, Planning and Natural Resources (DIPNR), Sydney Water (the then-owner of the site), and the local community. The Local Environment Plan (LEP) produced a master plan for the Kirrawee shopping village and brick pit which involved rezoning the site to a mix of commercial, residential, and 20% open public space.

In April 2005, after the election of a new councillor, 45 amendments were passed with regards to the LEP. These amendments changed the zoning to make the Princes Highway frontage commercial and the remainder "special uses". It was specifically noted that "...educational establishments are a permissible use in both zones".

In July 2007, a development group called Kirrawee Centre Pty Ltd, with directors including architect, George Revay, and brothers Stanley and John Roth, purchased the site from Sydney Water for $22.5million.

The State Government had previously said the buyer would have to develop it in accordance with a comprehensive master plan, which includes a mix of multi-storey apartments, business units and a one-hectare public park.

In May 2008 a new development application was proposed for the site including a shopping centre with 2 supermarkets and 63 apartments. [3]

The development tick-tacked between council and the developer and eventually a far more commercially-based development proposal was lodged with the Land and Environment Court of NSW and heard over February, April, June and July 2009, with a judgement made on 7 August 2009.

The current application has 30 percent more units than the proposal refused by the Land and Environment Court in August 2009, which raised a number of concerns including the impact on retailers in Kirrawee and Sutherland, the design of the public open space, and the ecological impact. Local retailer Supabarn was one of many to protest strongly, particularly after the group spent $18 million to develop a supermarket site in nearby Sutherland.

On 28 August 2012 the re-development of Kirrawee Brick Pit was approved.

Kirrawee railway station is on the Cronulla line which links Sydney's southern suburbs to the CBD. Kirrawee is approximately 40 minutes by train to the CBD. Kirrawee was one of the last remaining single platform stations in Sydney. Duplication of the train line from Sutherland to Cronulla commenced in May 2006 and was completed in 2010.

Parts of Kirrawee are earmarked to become part of an extension to the Princes Motorway.

In addition to these bus services, as of 2017, part of Kirrawee south of the Princes Highway was served by the on-demand Transdevlink ride service pilot. The service was revised in January 2019, when all of Kirrawee was included. It ceased 17 November 2019.

There is an indoor climbing centre in Waratah Street, Kirrawee.

All content from Kiddle encyclopedia articles (including the article images and facts) can be freely used under Attribution-ShareAlike license, unless stated otherwise. Cite this article:
Kirrawee, New South Wales Facts for Kids. Kiddle Encyclopedia.