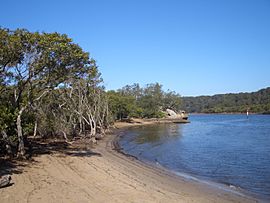 Grays Point is a suburb in southern Sydney, in the state of New South Wales, Australia 29 kilometres south of the Sydney central business district, in the local government area of the Sutherland Shire.

Grays Point is a small suburb with picturesque views of the Port Hacking estuary. Grays Point is adjacent to the Royal National Park and the suburbs of Gymea Bay and Kirrawee. There is only one road available for vehicular access however multiple walking and mountain bike tracks link it with locations such as Audley in the Royal National Park, Engadine and Heathcote.

The origin of the Grays Point name is unclear. It has been suggested that it was either named after Samuel William Gray, who owned land on the point or John Edward Gray, who was a well-known resident ranger in the Royal National Park in the 1880s.

At the 2011 census, there were 2,796 residents in Grays Point. The majority of people were born in Australia and the most common ancestries were English, Australian and Irish. The top responses for religious affiliation were Anglican 28.8%, Catholic 26.7% and No Religion 21.9%. The median household weekly income of $2,285 was substantially higher than the national median of $1,234. The majority of occupied dwellings were separate houses and these tended to be large properties, with 56.2% having 4 or more bedrooms.

All content from Kiddle encyclopedia articles (including the article images and facts) can be freely used under Attribution-ShareAlike license, unless stated otherwise. Cite this article:
Grays Point, New South Wales Facts for Kids. Kiddle Encyclopedia.