The Sydney Basin is an interim Australian bioregion and is both a structural entity and a depositional area, now preserved on the east coast of New South Wales, Australia and with some of its eastern side now subsided beneath the Tasman Sea. The basin is named for the city of Sydney, on which it is centred.

Around 5,000 metres (16,000 ft) thick, the Sydney Basin consists of Permian and Triassic sedimentary rocks, which stretches from Newcastle in the north to Batemans Bay in the south, and west to the Great Dividing Range. The basin is also home to the major centres of Newcastle and Wollongong, and contains economically significant reserves of coal.

According to NSW Primary Industries, the basin extends through approximately 350 kilometres (220 mi) of coastline from Newcastle in the north to Durras Lake (near Batemans Bay) in the south. From Durras Lake the western boundary continues in a line through Lithgow to around Ulan (near Mudgee). To the north the boundary extends 120 kilometres (75 mi) along the Liverpool Range to a point 80 kilometres (50 mi) north of Muswellbrook, and then runs 200 kilometres (120 mi) back to the coast at Newcastle. To the east the basin continues to the edge of the continental shelf.

The majority of Sydney Basin is raised sandstone plateau, with the exclusion being the Hunter Valley and the low-lying Cumberland Plain.

The Sydney Basin is part of a major basin system that extends over 1,500 kilometres (930 mi) from the Bowen Basin in Queensland through to the Gunnedah Basin in NSW. Onshore, the basin contains 4,500 metres (14,800 ft) of Permo-Triassic clastic sediments, while the offshore basin contains 6,000 metres (20,000 ft) of sediments. The basin overlies the Lachlan Fold Belt and Late Carboniferous volcanoclastic sediments. The basin formed during extension in the Early Permian, with half-graben infilled with the Dalwood and Talaterang Groups. Foreland loading followed with the compression of the Currarong Orogen in the Early Permian.

Late Permian uplift associated with the New England foreland loading phase resulted in the formation of depocentres with the northeast Sydney Basin with best preserved marine fossils. These depocentres filled with pyroclastic and alluvial-paludual sediments of the Newcastle Coal Measures. In the Triassic, uplift of the offshore basin resulted in reworking of Permian sediments in fluvial environments. The basin underwent a final phase of deformation (thrusting) in the Middle Triassic where it was uplifted to become dry land, with an erosion occurring from this time to the present.

Extension and breakup in the Tasman Sea beginning in the Late Cretaceous resulted in the current structural boundaries of the basin's eastern margin. In the south and west the Basin finishes in cliff lines formed on sandstones and conglomerates of the primary Permian sediments, with waterfalls being widespread on all escarpments. 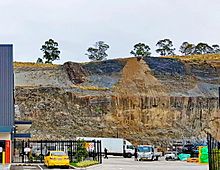 The hydrology of the basin comprises three main drainage basins as defined by the New South Wales Office of Water that lie entirely or mainly within the geography of the basin; namely the Central Coast catchment, the Hawkesbury-Nepean catchment, and the Sydney Metropolitan catchment.

All content from Kiddle encyclopedia articles (including the article images and facts) can be freely used under Attribution-ShareAlike license, unless stated otherwise. Cite this article:
Sydney Basin Facts for Kids. Kiddle Encyclopedia.