Fairfield (not to be confused for the governing council region that takes its name) is a western suburb of Sydney, in the state of New South Wales, Australia. Being in the centre of the Cumberland Plain, Fairfield is located 23 kilometres (14 mi) west of the Sydney central business district and is the administrative heart of the Fairfield City Council (local government area) – despite a very small portion of it belonging to the Cumberland Council. Fairfield supports a mixture of commercial and residential developments, mostly characterised by medium-density buildings and some new high-rise apartments.

Fairfield is one of the most multicultural and culturally diverse cities in Australia, with more than half of the residents having been born overseas, mostly in non-English speaking countries. The majority of the suburb's dwellers speak a language other than English at home, with the two most common ones being Arabic and Assyrian Neo-Aramaic. Fairfield is an ethnic enclave of Assyrian Christians (mostly from Iraq, and more recently Syria) and other Iraqis of various religious and ethnic origins. Fairfield also is home to a large Latin American presence.

For more than 30,000 years, Aboriginal people from the Cabrogal-Gandangara tribe have lived in the Fairfield area.

The earliest recorded white settlement in the Fairfield district is described in William Bradley's Journal where he noted an expedition from Rose Hill to Prospect Creek to determine whether Prospect Creek led to Botany Bay. Bradley described a place on the Creek where the water changed from fresh to salt with a drop of 4 feet (1.2 m). The presence of salt water confirmed Prospect Creek's connection to the sea.

The free settler John Horsley purchased the estate in that year and named it Mark Lodge, after family properties in Essex, England. Horsley, a Magistrate and Coroner at Liverpool (1825-1834), and his large family were among the pioneers of white settlement in the Fairfield District. Later, a Colonial Treasurer, Thomas Ware Smart (1810–1881) bought the estate and in the 1860s built the mansion, 'Fairfield House'.

Fairfield railway station was opened in 1856 and has the oldest surviving railway building in New South Wales. Development began in the mid 19th century supported by railway construction in 1856. Around the start of the 20th century the area had a population of 2,500 people and with fertile soils, produced crops for distribution in Sydney. Electricity was connected in 1921.

Rapid population increase after World War II saw the settlement of many ex-service men and European migrants. Large scale Housing Commission development in the 1950s swelled the population to 38,000. By 1979, the population had reached 120,000 and the City was becoming one of the larger Local Government Areas in New South Wales. During the 1980s war between Iraq and Iran, large number of Assyrians fled Iraq and settled in Fairfield, making it the most popular settlement for Assyrians. In recent years it has been dubbed the murder capital of Sydney because of the increased wave of murders and gun crime which has happened recently.

Fairfield's large Iraqi and Assyrian community has had the media describe the suburb as 'Little Iraq' or 'Little Assyria'. More Iraqi businesses have opened in Fairfield, mostly around Ware Street. These businesses include everything from jewellery shops to restaurants, making the area favourite entertainment and shopping hotspot for the Iraqi/Assyrian community.

There is a large library in the heart of the suburb.

Fairfield has two local newspapers, The Fairfield Advance and the Fairfield Champion, which are issued every Wednesday.

Much of the original bushland cover within the City has been cleared through past land management practices. A few small areas of this original bushland remain, including examples of Cumberland Plain vegetation, which is listed under the Threatened Species Conservation Act.

Eight creeks, 80 kilometres in length, have their headwaters in Fairfield City and flow into the Georges River and Hawkesbury Nepean catchments. The impact of development over the past 50 years has resulted in severe degradation of the natural habitat in the creek banks and water quality has been assessed as very poor in recent years. Strategies are being implemented so that this trend is being reversed.

Air quality in the City is heavily impacted upon by an insufficiently integrated public transport system, creating an over reliance upon private vehicles for moving people and freight.

Fairfield has a humid subtropical climate (Köppen climate classification: Cfa). Summer weather may come from north-east (humid) or the north west (dry). Fairfield is usually a few degrees warmer than Sydney on summer days and a few degrees cooler on winter nights. There could be a temperature differential of 5 degrees Celsius in summer due to sea breezes in the City that don't generally penetrate inland, and in extreme cases there could be a 10 degrees differential. It receives less annual rain than Sydney CBD by about 400mm. Even though fair amount of rain is spread throughout the year, late winter and early spring get the least rain, whilst late summer and autumn get a lot of rain.

NOTE: Fairfield is a large suburb, therefore some areas in it may be adjacent to the climate of the top or bottom table. 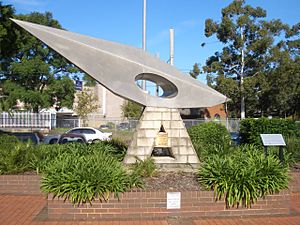 The International Monument, built as a symbol of Fairfield's migrant population

According to the 2016 census, the suburb of Fairfield had a population of 18,081 people, the majority of whom (67.3%) were born outside of Australia.

Only 17.4% of people spoke English as their only home language. The most common language spoken other than English is Neo-Aramaic at 35.6% Assyrian Neo-Aramaic at 6.8%, Arabic at 14.3% (mostly Iraqi Arabic, then Syrian Arabic and other varieties of Arabic), Vietnamese at 11.0%, and Spanish at 4.5%.

Of occupied private dwellings in Fairfield, 39.6%% were separate houses, 13.4%% were semi-detached or townhouses and 46.0% were apartments. 21.3%% of the dwellings were owned and 55.0% were rented. The median family income of people living in Fairfield ($650 per week) was much lower than the national median ($1481). 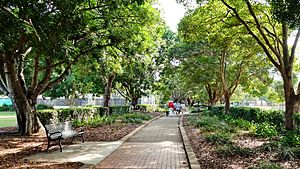 The avenue of remembrance in Fairfield Park

Fairfield Adventure Park, a large playground for older children and teens, was opened in April 2015. Nearby is the Fairfield Youth and Community Centre and the Fairfield Leisure Centre, an aquatic centre. These facilities are all situated in Fairfield Park Precinct, a large urban park and sports ground. Prospect Creek winds through it.

Fairfield is also the home suburb of the Fairfield Bulls and Fenix FCS football clubs.

The Crescent Park is adjacent to the station, which features public seating surrounded by native and exotic plants. Another green space in the city is the David Carty Reserve, which is a small, round islet, surrounded by Fairfield Street and The Horsley Drive, that features a number of prominent Hill's weeping figs, and camphor trees – which are introduced evergreens native to East Asia. 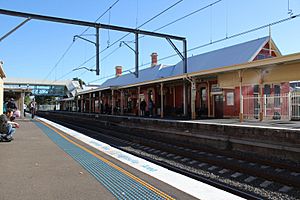 All content from Kiddle encyclopedia articles (including the article images and facts) can be freely used under Attribution-ShareAlike license, unless stated otherwise. Cite this article:
Fairfield, New South Wales Facts for Kids. Kiddle Encyclopedia.