Smithfield is a suburb of Sydney, in the state of New South Wales, Australia. Smithfield is located 25 kilometres (16 mi) west of the Sydney central business district, in the local government areas of the City of Fairfield and Cumberland Council. Located in the Greater Western Sydney region, the suburb is one of the largest in Fairfield City by area.

Established in 1836, Smithfield was the first major settlement of the Fairfield LGA. The original 1838 summary plan of Smithfield shows the suburb laid out in a grid pattern with most of the streets having the same names as they do today. Its altitude ranges from 21 to 48 m (69 to 157 ft) above sea level. Geologically, the suburb sits on the Cumberland Plain. The suburb is a mix of residential, industrial and commercial areas, but is mostly characterized by low-density housing.

Located partially in the suburb, the Smithfield-Wetherill Park Industrial Estate is the largest industrial estate in the southern hemisphere and is the centre of manufacturing and distribution in greater western Sydney. Smithfield West is a locality within the suburb and it is an unofficial designation for the region westwards from Dublin Street to the boundary of Wetherill Park.

Aboriginal people from the Cabrogal tribe, a sub-group of the Gandangara tribe, have lived in the Fairfield area for over 30,000 years.

White settlement began in the area in the early 19th century. Smithfield was originally known as Chilsholm's Bush. In 1867, Smithfield was a semi-rural settlement populated by vine growers, gardeners, wood timber cutters, orchards and tanneries. Early settlers were attracted to Smithfield by its good soil, dependable water supply and easy access to the Colony's established towns. Some of the best farming land was in the district to the west and southwest of the Smithfield area.

In 1803, homeless children were becoming a problem after convicts turned their children out into the streets. As a consequence, Governor Philip Gidley King, put aside a large area of 12,300 acres (50 km2) for a Male Orphan School. By 1836, some of this land was offered for sale by the colonial government of the time. John Ryan Brenan (1798–1868), an attorney who was appointed Police Magistrate in 1836, bought 1,650 acres (7 km2) here.

Brenan planned to make money with a meat market and a cattle saleyard. He subdivided the estate and named it Smithfield after the meat markets of London and Dublin. Saleyards opened in 1841 but the project to establish a village around the yards failed. Despite this, Smithfield did become a thriving commercial centre and remains a significant employment centre in south-western Sydney as part of the Wetherill Park/Yennora industrial block.

Smithfield still has the street patterns Brenan planned and the street names he chose. In the subdivision, Brenan offered an extra adjoining allotment to any buyer who built a cottage with a brick chimney and enclosed the property with a fence. The public school opened in 1850 and by the 1880s Smithfield was well provided with churches, many of which still remain today as important relics of Smithfield's rich local heritage.

The Horsley Drive is the major road that runs through Smithfield. Other major roads include Polding Street, Brennan Street and Victoria Street, with the latter featuring factories.

Bus services are provided by Transit Systems Sydney. The closest train station is Fairfield train station, on the Inner West & Leppington Line and Cumberland Line. Transit Systems Sydney buses 806, 808, 812, 813, 814 and 817, which go through the suburb, link to that station, with 806 also linking to Parramatta railway station and Liverpool railway station.

There is a cycle way called Prospect Creek Cyclepath that runs through the suburb, which is part of the Western Sydney Regional Park recreational route.

Smithfield features an art gallery, museum and an RSL club. Smithfield was the location for the SBS TV show Housos, being one of the many locations for that TV show. 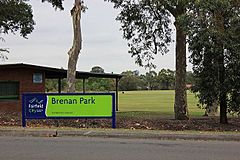 The main entrance of Brenan Park.

Named after John Ryan Brenan, Brenan Park is a 20-hectare recreational area. It features six tennis courts and soccer fields, two cricket practicing nets, baseball and softball diamonds, children's playgrounds and picnic areas. The park is floodlit and can be used at nights. It was established in 1980, when it was a garbage dump prior to that. Vegetation in the park include Melaleuca quinquenervia, Casuarina, Bottlebrush, Paperbark, Acacia, Lomandra and Eucalyptus bosistoana. A community hall is located in the park.

A seating area in Roseford Street Reserve, opposite of a walking track, with the woodlands in background which lie on the edges of Prospect Creek.

Roseford Street Reserve is a 20 hectare open parkland in the northern skirts of the suburb which features a large sports grounds, long cycling and walking tracks, native woodland areas to the north, and a picnic shelter. Prospect Creek winds through the northern edges of the Reserve, creating the border between Fairfield City and Cumberland Council. The park adjoins Long Street Park, which is situated in Cumberland Council section of Smithfield and features a soccer field. The vegetation surrounding the creek has been identified by the NSW National Parks and Wildlife Service (NPWS) as a Cumberland Plain Endangered Ecological Community (CPEEC). The woods are dominated by Eucalyptus amplifolia and Eucalyptus tereticornis.

All content from Kiddle encyclopedia articles (including the article images and facts) can be freely used under Attribution-ShareAlike license, unless stated otherwise. Cite this article:
Smithfield, New South Wales Facts for Kids. Kiddle Encyclopedia.