The Cumberland Plain, an IBRA biogeographic region, is a relatively flat region lying to the west of Sydney CBD in New South Wales, Australia. Cumberland Basin is the preferred physiographic and geological term for the low-lying plain of the Permian-Triassic Sydney Basin found between Sydney and the Blue Mountains, and it is a structural sub-basin of the Sydney Basin.

The Cumberland Plain has an area of roughly 2,750 square kilometres (1,060 sq mi). Shaping the geography of Sydney, it extends from 10 kilometres (6.2 mi) north of Windsor in the north, to Picton in the south; and from the Nepean-Hawkesbury River in the west almost to Sydney City's Inner West in the east. Much of the Sydney metropolitan area is located on the Plain. The Hornsby Plateau is located to the north and is dissected by steep valleys.

The area lies on Triassic shales and sandstones. The region mostly consists of low rolling hills and wide valleys in a rain shadow area near the Blue Mountains. The annual rainfall of the plain is typically around 700–900 mm, and is generally lower than the elevated terrain that partially surrounds it. Common vegetation in the Cumberland Plain is eucalyptus trees. Soils in the plain are usually red and yellow in texture.

The plain takes its name from Cumberland County, in which it is situated, one of the cadastral land divisions of New South Wales. The name Cumberland was conferred on the County by Governor Phillip in honour of Ernest Augustus, Duke of Cumberland. Being the most populous region in Australia, the Cumberland Plain is one of the fastest growing areas of the country in terms of population and it is home to a variety of Australian animal species, which are observable in the urban environments. 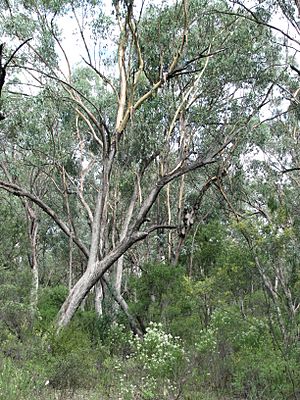 The Cumberland Plain starts westwards of the inner west, towards south-western Sydney, and into the Greater Western Sydney area. It is within the local government areas of Blacktown, Burwood, Camden, the western portion of Campbelltown, Canada Bay, Canterbury-Bankstown, Cumberland, Fairfield, Georges River, Hawkesbury, the Western outskirts of the Inner West Council, Liverpool, Parramatta, Penrith, Ryde, Strathfield, The Hills Shire, Wingecarribee, and Wollondilly.

The rest of the Sydney regions such as Sydney CBD (including the City of Sydney), North Shore, Northern Beaches, Eastern Suburbs, Southern Sydney (including Sutherland Shire), Hills District, Hornsby Shire and the Forest District do not lie in the Cumberland Plain. 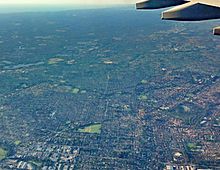 An aerial view of the flat, urbanized plains in western Sydney: Smithfield (bottom of map) to Liverpool (top-right).

Formed about 80 million years ago, the Cumberland Plain consists of not exactly flat plains; overall it is a low-lying area, largely over shale and labile sandstone, which derives its recognition largely by comparison with the surrounding uplands of harder quartzose Sydney sandstone. Relative to the surrounding higher sandstone lands, Hornsby and Blue Mountains Plateaux, it was an early matter of debate in Sydney physiographic circles as to whether the Cumberland Plain had gone down, or the surrounding plateaux had been raised up. Despite much study, especially along the western side at the Lapstone monocline, this complex matter is still not fully understood. There are volcanic rocks from low hills in the shale landscapes. Swamps and lagoons are existent on the floodplain of the Nepean River.

The Wianamatta Plain, with many undulating hills of Wianamatta Group shales and sandstones, bounded by the Woronora and Illawarra Plateaus to the south, the Blue Mountains Plateau to the west and the Hornsby Plateau to the north/northeast. At the front of the Blue Mountains Plateau runs the Lapstone Structural Complex, which forms the western edge of the Cumberland Basin and Cumberland Plain. This is a north-south trending collection of reverse faults and monoclinal folds which extends generally north south for over 100 kilometres (62 mi). At the opposite side of the Cumberland Plain the Hornsby Plateau is fronted by the Hornsby Warp. That warp is topographically subtle in comparison to the Lapstone Structural Complex, and it is a feature which is poorly defined and inadequately defined in literature.

Prospect Hill in western Sydney is the largest assemblage of igneous rock in the Plain. The oval-shaped ridge was made many millions of years ago when volcanic material from the Earth's core actuated upwards and then sideways. Slow erosion of the overlying layers of sedimentary rock by the flow of rainwater have eventually laid bare the edges of the volcanic and metamorphic rocks of the intrusion. The western suburbs lie on the relatively flat, lowly elevated parts of the Cumberland Plain. Though there are a few hilly or relatively elevated regions on the plain. Western Sydney Parklands and the surrounding suburbs (such as Cecil Hills and Horsley Park), for instance, lies on a prominent ridge that is between 130 to 140 metres (430 to 460 ft) high. 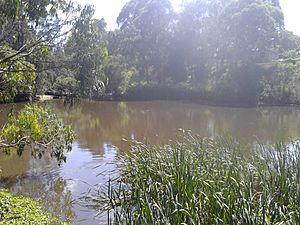 The Parramatta River is the most prominent river that flows within the Cumberland Plain.

Bringelly Shale and Minchinbury Sandstone are often seen in the Plain's west. Ashfield Shale is observed in the inner western suburbs. These components are part of the Wianamatta Shale group.

Rivers in the Cumberland Plain are salient. The Nepean River rises to the south in the Woronora Plateau, and wraps around the western edge of the city. Parramatta River's headwaters are several local creeks including Toongabbie Creek and Hunts Creek, part of the upper Parramatta river catchment area. Hunt's creek flows from Lake Parramatta, a few kilometres North of Parramatta. Warragamba River flows 3.5 kilometres (2.2 mi) north-east from the Warragamba Dam spillway to its confluence with the Nepean River.

The south and southwest of Sydney is drained by the Georges River, flowing north from its source near Appin, towards Liverpool and then turning east towards Botany Bay. The other major tributary of Botany Bay is the Cooks River, running through the inner-south western suburbs of Canterbury and Tempe. The Georges River estuary separates the main part of Sydney's urban area from the Sutherland Shire. The Woronora River, on the southern edge of the Sydney Plain, flows in a steep-sided valley from the Woronora Dam to the eastern estuary of the Georges River. 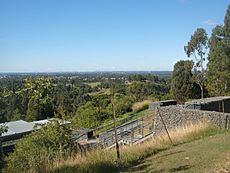 The Cumberland Plain as viewed from atop the Western Sydney Parklands in Horsley Park.

The most predominant plant communities in the Cumberland Plain are grassy sclerophyll woodlands. Dry and wet sclerophyll forests generally lie on the Hornsby plateau, an elevated region north of the Plain. Dry sclerophyll forests contain eucalyptus trees which are usually in open woodlands that have dry shrubs and sparse grass in the understory.

A riparian woodland in an urban park in western Sydney with casuarina and eucalyptus trees.

The Cumberland Plain is home to a variety of bird, insect, reptile and mammal species, including bats. Arachnid, amphibian and crustacean species are also present.

About 40 species of reptiles are found in the Cumberland Plain. 30 bird species exist in the urban areas, with the common ones being the Australian magpie, Australian raven, noisy miner and the pied currawong. Introduced birds include the common mynah, common starling and the house sparrow.

14 mammal species are widespread in the plain, with common species being those of bats and possums. The outskirts of the Cumberland Plain, such as those adjacent to large parks, have a great diversity of wildlife. 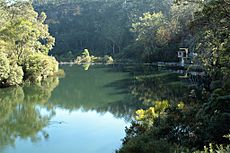 The sclerophyll woodlands are situated on a nutrient-poor alluvium deposited by the Nepean River from sandstone and shale bedrock in the Blue Mountains. Despite this, they support a tremendous regional biodiversity. Cleared and used first for agriculture and then for urban development, most of the ecological communities that originally flourished on the plain are now considered endangered.

Under Federal environmental legislation, six of the above ecological communities are protected as four "matters of national environmental significance". Some are grouped together into broader communities that share similarities in landscape position, structure and/or species.

Cumberland Plain communities are protected in a number of council reserves, plus the Lower Prospect Canal Reserve, Scheyville National Park, Windsor Downs Nature Reserve, Leacock Regional Park and Mulgoa Nature Reserve and Mount Annan Botanic Garden. Cumberland Plain Woodland, of which around six per cent remains in isolated stands, was the first Australian ecological community to be assigned this status.

A countryside in Western Sydney with an open bushland.

The western portion of the Cumberland Plain mainly consists of sparsely populated, vast, rural grasslands with undulating hills and scenic vistas. The Sydney western suburbs of Mount Vernon, Kemps Creek, Orchard Hills, Luddenham, Mulgoa, Bringelly, Silverdale and Horsley Park, among others, lie in this agricultural countryside, adjacent to the footsteps of the Blue Mountains westwards of these country plains.

Furthermore, Abbotsbury, Cecil Hills and Glenmore Park were farms through until the 1980s when it was decided to redevelop them for housing. The area around the site of Regentville has remained largely rural, if hemmed in somewhat by the modern residential suburbs of Jamisontown and Glenmore Park.

In the 1800s, John Blaxland built an original wooden weir at "Grove Farm" (now known as Wallacia) for a sandstone flour mill and additional brewery. The land was also used for wheat farming until 1861 when wheat rust infected the entire crop. The rural regions were chiefly one of dairying and grazing during the 19th century, but in the early 20th century - because of its rural atmosphere and proximity to Sydney - tourism developed as people opened their homes as guest houses. Today, the rural areas include a number of orchards and vineyards in the meadows. Vegetable farming and fruit picking are common activities.

All content from Kiddle encyclopedia articles (including the article images and facts) can be freely used under Attribution-ShareAlike license, unless stated otherwise. Cite this article:
Cumberland Plain Facts for Kids. Kiddle Encyclopedia.