The noisy miner (Manorina melanocephala) is a small grey bird with a black head and yellow eyes. This bird is common in the gardens of eastern Australian homes, but is not seen in Western Australia or the Northern Territory. The genus puts it in a large group of honey-eating birds. The species is a Latin word meaning "black-headed."

The noisy miner is a native of Australia, and one of the few native birds that is thriving in cities and suburbs. In some parts of Australia the number of noisy miners has grown to the point that it is driving out smaller birds like the wrens. It prefers gardens with open spaces and lawns. 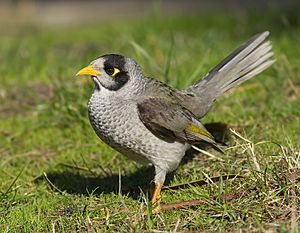 A grey bird with a distinctive yellow patch behind the eye, yellow-orange bill and feet and a yellow-olive patch on the wing

It usually eats the nectar from garden flowers, mostly on grevilleas, however it also walks around on grass picking up and eating small insects. 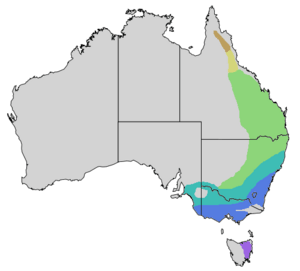 Distribution of the Noisy miner in mainland Australia and Tasmania

It is highly aggressive when other birds enter its area of garden or bush, and it flocks together with other nearby noisy miners to make small defensive groups called 'coteries' of four or five which cooperate to drive off kookaburras or magpies. Sometimes they join together into even larger 'colonies' with up to a hundred or so birds.

The female will lay between two and four eggs in her nest, and food will be bought to the mother and her chicks by quite a few males in the coterie. Bringing up the chicks is often done by the whole group. They breed at any time in the year so there are often young noisy miners in the group. The younger birds usually have feathers and face colouring very similar to the adult birds, so it is often difficult to tell the difference.

They are sometimes called native miners, native mynas or native mynahs (actually an Indian spelling), and, in older bird books they might have up to twelve different names. At one time they were thought to be mainly bee-eaters, but they eat the nectar of Australian native flowers. They are also known to eat fruit and insects, and at times small reptiles and amphibians. While the name is often spelled myna, or mynah, they are not related to the introduced brown/black-feathered "Indian" or "Common mynah" which is usually slightly larger and often found in the same area.

As the common name suggests, the noisy miner is a noisy species. It has a large variety of songs, calls, scoldings and alarms, most of which are harsh single notes. It has a special alarm call which is only used when the threat comes from a large bird flying overhead, and a different alarm call when intruders like humans and dogs enter their territory. A study of the bird found that those who lived in a noisy urban area were able to make their alarm call louder so it could be heard.

All content from Kiddle encyclopedia articles (including the article images and facts) can be freely used under Attribution-ShareAlike license, unless stated otherwise. Cite this article:
Noisy miner Facts for Kids. Kiddle Encyclopedia.