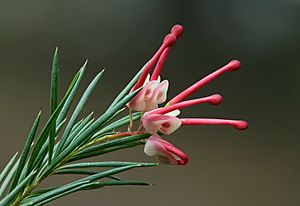 Grevillea is a genus of about 360 species of evergreen flowering plants in the protea family Proteaceae. It comes from Australia, New Guinea, New Caledonia, and Sulawesi. It was named after Charles Francis Greville. The species are quite different from each other, from low growing shrubs less than 0.5 m tall to trees 35 m tall. Common names include Grevillea, Spider Flower, Silky-oak and Toothbrush.

Grevilleas are closely related to the genus Hakea, the genus gives its name to the subfamily Grevilleoideae. Many species of grevilleas are popular garden plants, especially in Australia but also in other temperate and subtropical climates. Many grevilleas interbreed freely, and some specially picked hybrids have been grown for sale. Among the best known are Grevillea 'Robyn Gordon', a small shrub up to 1.5 metres high and wide which can flower 12 months of the year in subtropical climates.

All content from Kiddle encyclopedia articles (including the article images and facts) can be freely used under Attribution-ShareAlike license, unless stated otherwise. Cite this article:
Grevillea Facts for Kids. Kiddle Encyclopedia.