Mulgoa is a village, located in the local government area of the City of Penrith, in the region of western Sydney, in the state of New South Wales, Australia. Mulgoa is located approximately 66 kilometres (41 mi) west of the Sydney central business district.

Mulgoa covers an area of 5,530 hectares (13,700 acres), south of the Penrith suburbs of Regentville and Glenmore Park.

Mulgoa takes its name from the Mulgoa people who were the indigenous inhabitants of the area and spoke the Dharug language. The name is believed to mean black swan. The Mulgoa weren't the only inhabitants of the area. They shared the Mulgoa Valley with the Gandangara people of the Southern Highlands, whose territory extended up into the Blue Mountains. They lived a hunter-gatherer lifestyle governed by traditional laws, which had their origins in the Dreamtime. Their homes were bark huts called 'gunyahs'. They hunted kangaroos and emus for meat, and gathered yams, berries and other native plants.

Following the arrival of the First Fleet in Sydney, there were a number of bloody battles between the British settlers and the local indigenous people in this area, however, it is believed that the Mulgoa people were generally peaceful and most of the clashes were with the Gandangara. The first government land grants in the area were made in 1810 to Edward Cox, the four-year-old son of Captain William Cox, who constructed a famous road across the Blue Mountains in 1814. William Cox built The Cottage on the land in about 1811. Not far away dwelt Cox's friend Sir John Jamison, who erected the colony's finest mansion, Regentville House, in 1824, on an eminence overlooking the Nepean River. In 1821, three large land grants were made on the Nepean at Mulgoa to the Norton family: James Norton, the founder of Sydney's first law firm and his father and brother, Nathaniel. 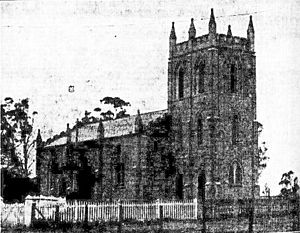 The centre of Mulgoa's spiritual life in the colonial era was St Thomas' Anglican Church, which dates from 1838. It was the first public building in the Mulgoa Valley and was constructed out of sandstone and cedar on paddocks donated by the Cox family, with Sir John Jamison serving as one of its patrons. The Reverend Thomas Cooper Makinson was St Thomas' inaugural rector. Attached to the church was Mulgoa's first school. It operated until 1871–72, when the Mulgoa Provisional School replaced it.

In 1893, Mulgoa's population was sufficiently large to be granted the status of a municipality. Its area extended beyond the current suburb boundaries. In 1949, however, council rationalisations led to it merging with Penrith, St Marys and Castlereagh into a larger Penrith Municipality. These days, Mulgoa is still primarily a rural area.

Mulgoa Road is the main road in the suburb, connecting with Penrith. Westbus, a private company, provides a bus service which runs from Warragamba to Penrith along Mulgoa Road.

All content from Kiddle encyclopedia articles (including the article images and facts) can be freely used under Attribution-ShareAlike license, unless stated otherwise. Cite this article:
Mulgoa, New South Wales Facts for Kids. Kiddle Encyclopedia.