Prospect Hill is a hill in Pemulwuy, New South Wales about 30 kilometres west of central Sydney. It is higher than the ridges of the Cumberland Plain around it and has steeper slopes. Its present-day highest point is 117 metres high, although before its summit was quarried away it rose to a height of 131 metres above sea level.

Prospect Hill is a “nodal point” of the Cumberland Plain. Its summit affords a “goodly prospect” west to the Blue Mountains and east to the man-made landmarks of central Sydney. People have walked round and over Prospect Hill for 30,000 years and have recognised it as a landmark, a meeting place and a boundary. It was known to local people as Mar-rong or Mur-rong in 1790.

For today's Australians it has historic significance, aesthetic values and commercial values. There are extensive industrial and housing developments on its slopes. The hill has a number of summits, with Marrong Reserve being the most popular for visitors.

The hill has historical significance as one of the first places in the fledgling colony of New South Wales where liberated convicts were granted land to farm. Furthermore, the settlement on Prospect Hill were a focus of significant ambivalence between the indigenous people and the white settlers throughout the 1790s. For over 180 years quarrying of the volcanic rocks for roadstone and other building materials has been an important activity.

The first recorded ascent of Prospect Hill by a colonist is that of Captain-Lieutenant Watkin Tench and his party on 26 June 1789. While there is no documentary evidence of Tench having named Prospect Hill, there is no doubt that it is in fact the hill that was shortly afterwards known by that name. In view of Tench's literary allusions to Milton's Paradise Lost, it seems highly probable that the experience of climbing it reminded him of the "goodly prospect of some forein land first-seen" by Milton's scout and that it was indeed Tench who first named it. 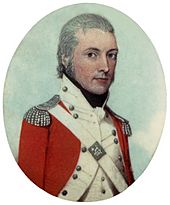 Watkin Tench, who was the first European to climb the hill.

Statements that Prospect Hill is the hill named Belle-Vue by Governor Arthur Phillip on its ascent by his expedition in April 1788 are unsubstantiated in contemporary record. The earliest written reference to the name Prospect Hill is probably the account of an after-dinner walk from Parramatta to the hill by Governor Phillip and Lieutenant (later Governor) Philip Gidley King in April 1790. King's account shows that the name Prospect Hill had become established by then.

In 1791 Governor Phillip started granting plots of land (mostly 30 to 70 acres) to emancipated convicts. Some convicts had spent years in prison and prison ships in England before being transported. Some of those who were under seven-year sentences had therefore completed them. Thirteen grants of land at Prospect Hill were made in July 1791, ranging from 30 to 70 acres. In 1799 Ensign William Cummings of the New South Wales Corps was granted 75 acres at Prospect Hill.

A change in the interpretation of government policy in 1792 had opened the way for grants of land to officers of the New South Wales Marine Corps. Cummings was the first beneficiary of this change. In 1808 William Lawson was granted 550 acres on the western slopes of the west ridge where he was to build his home Veteran Hall. He then bought Cummings' grant and it was here that his third son, Nelson Lawson built a magnificent home, Grey Stanes, on the crown of Prospect Hill.

Early grazing practices cleared the entire hill of trees. Quarrying in the area began in the 1820s and naturalist Charles Darwin visited Prospect Hill in January 1836, to observe the geology. By the latter part of the nineteenth century coarse-grained picrite, and other doloritic rock types were being extracted from William Lawson’s estate on the west and north sides of the Hill. Veteran Hall and its land were resumed when Prospect Reservoir was built as Sydney's main water supply in the 1880s.

The aboriginal leader Pemulwuy was active in this area. This ended in violent attacks in February 1798 in which dozens of settlers were killed. Retaliation by Europeans were generally fast and austere with many aboriginals killed who had not been involved in the attacks on Europeans. Eventually, a reconciliation was started by the Aboriginal people, negotiated by their women and one of the Prospect Hill settlers, John Kennedy.

The remaining clans who survived the first epidemics and dispossession came together in new groups with names like ‘Prospect Tribe’ and ‘South Creek Tribe’, which persisted until the early 1840s. On 3 May 1805 Rev. Samuel Marsden of Parramatta met with aboriginal representatives at Prospect Hill and, though he was reported to have been firm and adamant in laying down the conditions for a peaceful settlement, such a settlement was in fact achieved.

The Greystanes estate was eventually bought by quarrying interests. Prospect Hill was for many years the primary source of road-stone for the city's expanding infrastructure until the reserves of dolerite were exhausted. The land inside the oval-shaped ridge was leveled from 2008 to 2010 and is rapidly filling with large industrial buildings. The gap in the ridge that had previously been created by quarrying has been lowered to the floor level of the quarry and the drainage of the area reversed from its earlier northward flow to empty into Prospect Creek, while a new road, Reconciliation Road, has been driven through the centre of the hill from Prospect Highway and across the gap to Wetherill Park.

Rain that falls on its southern slopes flows into Prospect Creek and then via the Georges River into Botany Bay. The northern slopes drain into Girraween Creek and eventually into the Parramatta River and Port Jackson (Sydney Harbour). Close by to the west is Prospect Reservoir and beyond it, Eastern Creek flows north-west into the Nepean-Hawkesbury River, the mighty river that encircles Sydney forming the boundary of the Cumberland Plain and eventually flowing into the sea at Broken Bay.

Prospect Hill is a roughly oval-shaped ridge, a bit like a caldera. The Hill, which is the largest assemblage of igneous rock in Sydney, was made many millions of years ago when volcanic material from the Earth's core was thrust upwards and then sideways into joints in the layers of shales of the Cumberland Plain. It cooled into a thick disc of material and its heat changed the nature of the surrounding rock to produce a variety of minerals, predominantly coarse grained picrite with olivine-dolerite and dolerite. It didn't quite reach the surface but pushed the surface rocks upwards to form a dome. Erosion then undermined the main mass of volcanic material and caused it to fall in on itself and create a shallow dish-shaped formation. This is referred to as a doleritic laccolith.

In a normal laccolith the intruded material has a flat lower surface and a convex upper surface so that it is more like half a lens in shape. However, because of the collapse of the volcanic material combined with subsequent surface erosion, the Prospect Hill laccolith had a concave upper surface until modern times, when quarrying altered its shape. This has given rise to its description as "caldera-like" although it is not a true caldera, and explains why the Hill, although a laccolith (which is normally dome-shaped), is in fact dish-shaped. Thus Prospect Hill is neither a volcanic crater nor a caldera, since no volcanic material reached the surface of the earth. In a caldera, the collapse of the roof occurs during the volcanic period and is normally a much more explosive event.

The next stage of natural development, which has lasted over 60 million years, has been the slow erosion of the overlying layers of sedimentary rock by the flow of rainwater, which eventually laid bare the edges of the volcanic and metamorphic rocks of the intrusion.

All content from Kiddle encyclopedia articles (including the article images and facts) can be freely used under Attribution-ShareAlike license, unless stated otherwise. Cite this article:
Prospect Hill (New South Wales) Facts for Kids. Kiddle Encyclopedia.