Prospect is a suburb of Sydney, in the state of New South Wales, Australia. Prospect is located 32 kilometres west of the Sydney central business district in the local government area of the City of Blacktown and is part of the Greater Western Sydney region. One of the oldest suburbs in Sydney, Prospect takes its name from the prominent nearby landmark of Prospect Hill - from the top of which people could get a prospect of (see a great distance) the surrounding countryside.

Prior to the arrival of the First Fleet in 1788, Prospect was inhabited by different groups of the Darug people including the Warmuli. The Aboriginals there were of the woods culture. As European settlement expanded, the aboriginal people's ability to pursue their traditional lifestyle, which was already severely limited, disappeared. Prospect Hill had been the frontier, which was the first, and perhaps only, area where large scale organised resistance by aboriginal people took place.

Lieutenant Watkin Tench most likely named Prospect Hill in April 1790. In July 1791, thirteen grants of land at Prospect were made to emancipated convicts. In January 1794 David Collins reported that the Prospect Hill farmers were the most productive in the colony.

Prospect became the boundary between colonists and indigenous Australians. Hostility grew until by 1797, where a state of guerrilla warfare existed between indigenous people and the settler communities at Prospect and Parramatta. The aboriginal people were led by their leader, Pemulwuy, a member of the Bidjigal tribe who occupied the land. Pemulwuy was the main leader of raids against the colony in the 1790s. In 1797 the war escalated; his guerrillas started regular raids on settlements in the Parramatta and Prospect Hill areas. British military expeditions failed to locate and capture Pemulwuy.

Shortly after 1808, William Lawson was appointed aide-de-camp to George Johnston, was granted 500 acres (2.0 km2) at Prospect and built a large house there, which he named Veteran Hall. In the 1880s most of the property was submerged in what is now Prospect reservoir.

Quarrying companies gradually took over more and more of Prospect Hill, mining the dolerite for use as roadstone until it was almost all gone and much of the hill with it. The Prospect quarry is formed by an intrusion of dolerite rock into Ashfield Shale. At least seven different rock types occur in the intrusion. The material is predominantly coarse grained picrite with olivine-dolerite and dolerite. Roads were paved with grey dolerite from Prospect Hill as early as the 1820s. By the end of World War II, the quarries closed down except for two that had the best class of basalt. There are have been plans to close down the quarry and turn the 330ha site into half light industrial, half housing and open space.

Philip Gidley King mentions that the landscape of Prospect is "a very pleasant tract of country, which, from the distance the trees grew from each other, and the gentle hills and dales, and rising slopes covered with grass, appeared like a vast park. The soil from Rose Hill to Prospect-Hill is nearly alike, being a loam and clay." The tree cover was mainly the eucalypts, grey box and forest red gum. Spotted gum (Corymbia maculata) is also known to have occurred in the Prospect area.

Prospect has a humid subtropical climate (Cfa). Summer weather is warm to hot, and may be humid or dry. Although a fair amount of rain is spread throughout the year, late winter and early spring are fairly dry, whilst late summer through to early winter are relatively wet. The suburb gets 104.2 clear days annually, with the most sunniest days being in August (13.2) and least in February (5.0 days).

Prospect is usually a few degrees warmer than the Sydney CBD on most spring and summer days. In a few cases there has been a +10 degree differential (this is mostly when northwesterlies bring hot winds from the desert that raise temperatures up to +40 °C (104 °F). However, Prospect is usually a few degrees cooler on most nights of the year, because of its distance from the coast. The highest temperature recorded at Prospect was 45.1 °C (113.2 °F) on 18 January 2013. The lowest temperature recorded was −0.8 °C (30.6 °F) on 30 June 2010. 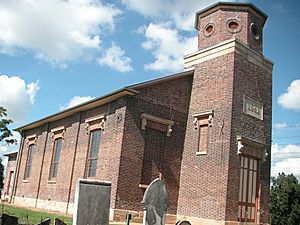 Prospect is adjacent to the Great Western Highway and the M4 Motorway, providing road access to the western sections of the city and eastward to the Sydney CBD.

Notable people who have resided in the suburb include:

All content from Kiddle encyclopedia articles (including the article images and facts) can be freely used under Attribution-ShareAlike license, unless stated otherwise. Cite this article:
Prospect, New South Wales Facts for Kids. Kiddle Encyclopedia.