Kids Encyclopedia Facts
This page is about the nature reserve. For the reservoir that's situated within the reserve, see Prospect Dam.

Prospect Nature Reserve is a nature reserve situated in the western suburbs of Sydney, New South Wales, Australia, which is an annex of Prospect Reservoir, that features picnic spots, lookouts, walking tracks and BBQ areas within the Australian bush which are open to the general public and run by Sydney Water.

It is part of the Special Water Catchment, and managed by New South Wale National Parks and Wildlife Service. It is located on the northern and eastern shore of Prospect Reservoir, and is within the Blacktown City local government area, but is also close to the boundaries of Cumberland Council (to the east) and the City of Fairfield (to the south). Prospect Nature Reserve lies within the Western Sydney Parklands.

Prospect Nature Reserve was established on 28 February 2007 and covers 325.3 hectares on the northern & western shore of Prospect Reservoir in Western Sydney. It is located approximately ten kilometres west of Parramatta and five kilometres south of Blacktown. Prospect Nature Reserve contains one of the largest remaining remnants of the critically endangered Cumberland Plain Woodland community, and therefore has a significant role in the conservation of regional biodiversity for western Sydney. The reserve also has cultural value to the Darug people. 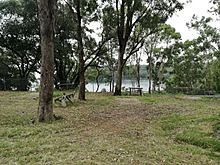 The bushland of the nature reserve.

Situated within the eastern reaches of Western Sydney Parklands, the reserve contains remnants of Cumberland Plain Woodland that erstwhile occurred extensively in Western Sydney. It contains the largest area of Grey Box Woodland within the Blacktown area, which comprises both the Shale Plains Woodland and Shale Hills Woodland elements of the Cumberland Plain. The vegetation condition varies from a young eucalypt canopy with a low diversity understorey to eucalypt regrowth in a largely exotic pasture. Other areas are exotic pastures with no native element present. 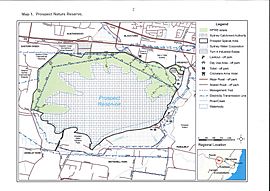 Bushland condition is best in the northern section and decreases in the southern areas. A rapid flora survey of Prospect Reservoir (approximately 1 km North from spoil site) revealed over fifty native species. 7.6% to 11.5% of the original bushland of this community in 1750 still remains. Most vegetation of the Nature Reserve (about two thirds) is Shale Hills Woodland, reaching the northern limit on the Nature Reserve, with the remaining third being Shale Plains Woodland.

Dominated by reed and rushes including Juncus spp, wetlands come about at the edge of the reservoir where they have formulated since inundation. The bushland near the filtration plant is less diverse and more degraded than in the immediately adjacent Sydney Catchment Authority land. A similar but much more restricted suite of native species can be found there. Exotic species including Chloris gayana (Rhodes grass), Setaria gracilis (pigeon grass) and Eragrostis curvula (African love grass) dominate. These species are indicators of significant soil disturbance.

Prospect Reservoir is an important refuge for many fauna species in Western Sydney. Mammals such as wombats, echidnas and eastern grey kangaroos are listed as recent sightings in the National Park species atlas. Importantly, over 12 species of bats (including threatened species) have been recorded within the vicinity of the reservoir.

The land is made up of Wianamatta Shale, which heavily influences the soils and vegetation on reserve and is characterised by shallow to reasonably deep soils, including red and brown podzolic soils on the peaks, and yellow podzolic soils on lower slopes and in drainage lines. There is a small pocket of cleared land, that drains off-catchment within the north-eastern boundary of the Nature Reserve.

On the western slopes of George Maunder Lookout lies the Prospect dolerite intrusion, which is Sydney's largest body of igneous rock, that formed in the Early Jurassic after a volcanic activity where hot magmatic fluids moved through developing pegmatite and depositing prehnite, calcite and other secondary minerals found in the upper part of the intrusion. The eroded residue of the volcanic core forms the hill (or the laccolith) that is the George Maunder Lookout (and as well as the rest of Prospect Hill just the west of the Reserve), which was battered down over millions of years to a small jut in the generally flat lands of western Sydney. 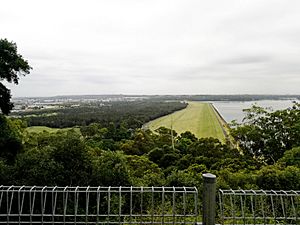 The reserve has a number of park precincts with picnic spots and BBQ, from north to south, on the eastern corridor of Prospect Reservoir:

From October 2013 to July 2015, the reserve was closed due to upgrades of the reservoir, which costed $13.7 million. Sydney Water owns and manages the picnic grounds at the reservoir.

Prospect Reservoir and its nature reserve was listed on the New South Wales State Heritage Register on 18 November 1999 having satisfied the following criteria.

This item is assessed as aesthetically representative locally.

All content from Kiddle encyclopedia articles (including the article images and facts) can be freely used under Attribution-ShareAlike license, unless stated otherwise. Cite this article:
Prospect Nature Reserve Facts for Kids. Kiddle Encyclopedia.