Bursaria spinosa is a small tree or shrub in the family Pittosporaceae. The species occurs mainly in the eastern and southern half of Australia and not in Western Australia and the Northern Territory. Reaching 10 m (35 ft) high, it bears fragrant white flowers at any time of year but particularly in summer. A common understorey shrub of eucalyptus woodland, it colonises disturbed areas and fallow farmland. It is an important food plant for several species of butterflies and moths, particularly those of the genus Paralucia, and native bees.

Bursaria spinosa is highly variable in appearance and habit, as are other species within the genus, and there have been several attempts at classification since their discovery. The Austrian botanist Aloys Putterlick divided Bursaria spinosa into spiny (spinosa) and lacking spines (inermis) in 1839. Several subspecies have been described, but a 1999 revision of the genus recognises only two, one of which B. spinosa lasiophylla had been considered a separate species. 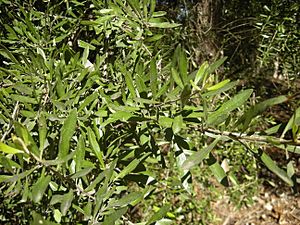 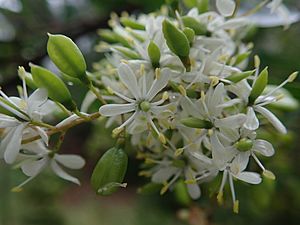 Bursaria spinosa has a variable habit, and can grow anywhere from 1 to 12 m high. The dark grey bark is furrowed. The smooth branches are sometimes armed with thorns, and the leaves are arranged alternately along the stems or clustered around the nodes and have a pine-like fragrance when bruised. Linear to oval or wedge-shaped (ovate, obovate or cuneate), they are 2–4.3 cm long and 0.3–1.2 cm wide with a rounded apex. The fragrant flowers can occur at any time of year, but mainly appear in the summer. They are arranged in leafy pyramid-shaped panicles.

In the Sydney region, it grows on clay- and shale-based soils, as an understory plant in association with grey box (Eucalyptus moluccana) and forest red gum (E. tereticornis) as well as the grass Themeda australis. It can form thickets on farmland which is ungrazed. In Tasmania, it grows extensively on rocky hills with shallow soils, amid open eucalypt forests and grassland on the islands east coast and Midlands regions. In the Southern Midlands and around Hobart, it grows extensively on open slopes where it forms large stands of stunted shrubs amidst grazing land.

Living for 25 to 60 years, Bursaria spinosa can resprout from its woody base after bushfire. Highly rhizomatous, plants of a stand are often genetically a single plant. Despite being genetically identical, different plants and even single shoots can be very distinct in appearance (for instance, spineless shoots previously regarded as a subspecies "inermis"). Its seed is wind-dispersed and it is a colonising plant.

A wide variety of insects visit the flowers of Bursaria spinosa, the most important pollinators of which appear to be beetles of several families. Common visitors recorded from field work around Armidale were jewel beetle species such as Curis splendens and Stigmodera inflata; longicorn beetles including Amphirhoe sloanei and Tropocalymma dimidiatum; scarab beetles; and tumbling flower beetles. Beetles and scoliid wasps all carried significant amounts of pollen. Other visitors such as flies and butterflies carried much lower amounts. The larvae of the jewel beetle species Astraeus crassus live in tunnels in dead and dying branches. Caterpillars which feed on Bursaria spinosa include Proselena annosana, two-ribbed arctiid (Palaeosia bicosta) and bark looper moth (Ectropis subtinctaria), while those of the clouded footman (Anestia ombrophanes) graze on algae and lichens which grow on the branches.

The drug aesculin is harvested from the plant in the Sydney region. Although its thorns make it unpopular in cultivation, Bursaria spinosa provides nectar for butterflies and a haven for small birds.

All content from Kiddle encyclopedia articles (including the article images and facts) can be freely used under Attribution-ShareAlike license, unless stated otherwise. Cite this article:
Bursaria spinosa Facts for Kids. Kiddle Encyclopedia.