The Western Sydney Parklands is an urban park system and a nature reserve located in Sydney, New South Wales, Australia. The NSW government has spent around $400 million for the park. The park is governed by the NSW National Parks and Wildlife Service and is listed under the National Parks and Wildlife Act 1974. The Parklands begin in the north in the City of Blacktown, cross the City of Fairfield, and end in the City of Liverpool.

The parklands, being approximately 5,280-hectare (13,000-acre) in size and 27 kilometres (17 mi) in length, are one of the largest in the world, and they would feature picnic areas, sports grounds and walking tracks. The parklands attract 430,000 to 790,000 visitors annually. In addition, the parkland provided lands for the 2000 Olympic Games.

The Parkland was an area of specialty for the Darug people and it is still deemed as important by the Aboriginal Land Council. The Parkland has been visited by some early settlers, such as Edward Abbott and George Johnson. The Park was originally used for agricultural purposes which included gardening, dairy farming and grazing. The early settlement in the Parklands took place in Prospect in the 1790s.

The Parklands were planned in 1968, as Western Sydney needed open space and recreational areas. In the late 1970s, the northern parts of the regional park had areas for rural residential lots (near Horsley Park), though by 1997 they became part of Western Sydney Regional Park. In the year 2000, the parklands supplied venues for the Sydney Olympic Games. The boundaries of the park were completed in 2006. A year later, the walking and cycling track, which meander through the park, was finally finished and opened to public.

The park is around 27 kilometres (17 mi) long, starting from the suburb of Quakers Hill in the north, to Leppington (Liverpool) in the south, and is located in the heart of the Greater Western Sydney area. It features a conspicuous ridge that runs through it from north to south, providing panoramic views of Greater Western Sydney. Every entrance to the parkland contains prominent planting accompanied by a large signage to indicate access. The Parklands contain the headwaters of Eastern Creek, as a tributary of the Hawkesbury-Nepean. The north-south ridgeline in the Parklands is the catchment boundary between the Hawkesbury-Nepean, Georges River and Parramatta River catchments. 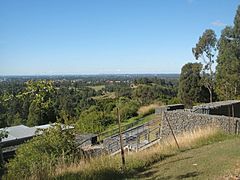 The Sugarloaf Ridge picnic area and the Australian fauna within its prospect.

The park has around 135 hectares of woodland areas, which are remnants of Cumberland Plain Woodland. Most parts of the regional park are made up of 427 hectares of planted re-vegetation and cleared grassland areas. The Parkland's environment has remained very similar to how it was prior European contact. The park consists of 135 hectares of woodland, with the majority comprising 427 hectares of planted vegetation and cleared grassland areas. Until recently, the NSW Government has re-vegetated the area through the Greening Western Sydney Program. The Parkland's revegetation has been going since the early 1990s.

The Park contains threatened and endangered species which are protected under State and Commonwealth legislation. Wildlife in the parks includes many native species of frogs, birds, lizards and bats. Foxes and rabbits are not rare and not unheard of. The parklands from Quakers Hill, Glendenning & all the way to Bungarribee are home to a large population of Eastern Grey Kangaroos. There is also a substantial Fallow Deer population also. Around eighty native vertebrate species exist within the parkland. Migratory birds are also known to visit. A search by Wildlife Atlas returned the identification of 167 vertebrate fauna species within the Park.

One group of birds that is present all year round are the parrots. Many breed in the Parklands' trees are found, such as rainbow lorikeets, rosellas, red-rumped parrots, galahs and cockatoos. Threatened species in the park include, Meridolum corneovirens, Grey-headed flying fox, little eagle, Eastern false pipistrelle, Varied sittella, East-coast free-tailed bat, Common bent-wing bat, Rüppell's broad-nosed bat and Turquoise parrot.

The parklands have 16 precincts and 50 park areas. From north to south, the following parks, reserves, geographical features and sporting facilities are incorporated into the Western Sydney Parklands. Most of the precincts below feature picnic and BBQ areas, pathways (for cycling or walking) and children's playgrounds. The most popular picnic areas in the park are Lizard Log, The Dairy and Plough and Harrow.

All content from Kiddle encyclopedia articles (including the article images and facts) can be freely used under Attribution-ShareAlike license, unless stated otherwise. Cite this article:
Western Sydney Parklands Facts for Kids. Kiddle Encyclopedia.