Quakers Hill is a suburb of Sydney, in the state of New South Wales, Australia. It is 40 kilometres (25 mi) west of the Sydney central business district, in the local government area of the City of Blacktown. Quakers Hill is part of the Greater Western Sydney. Quakers Hill is colloquially known as 'Quakers'.

The first recorded cartographic use in NSW of the 'Quaker' name is that of "Quaker's Row", today's Church Street, Parramatta. In November 1788 a second settlement is established by Governor Phillip at Rose Hill and was renamed in June 1791, Parramatta. In July 1790 he laid out his plan for the town, with High Street (now George) the main road with another (143 feet / 43.6 m wide) starting at the south bank of the river where Phillip intended a town square with government buildings and an extended wharf. This he named Quakers Row.

Alan Sharpe, in his "Pictorial History Blacktown and District" (referenced below) on page 84 has no mention of the historic town plan of July 1790.

Development at Parramatta was swift, with the Rev Samuel Marsden establishing conformist religious services. The Quaker's Row inhabitants were moved further west to The Quaker's Hills, where they re-established themselves. It is said they were responsible for burying the dead in simple cairn marked graves that lay in the fields, paddocks and creeks who were all victims of the 1804 uprising and rebellion.

The name Quakers Hill was in an 1806 report of the area by government surveyor James Meehan. The origin of the name is unclear and the next references are more than sixty years later when Thomas Harvey used it for his property in what is now western Quakers Hill. When the railway station was built in 1872, it was called Douglas' Siding for over thirty years. The catalyst for the name change came with the subdivision of Harvey's Quakers Hill property in 1904. The residents of the newly forming village preferred that name and in 1905, the name of the railway station was changed to Quakers Hill.

Postal services began in 1907 and the first post office was built in 1915. A school opened in the Presbyterian church hall in what is now Marayong in 1911 and Quakers Hill Public School took its first students in 1912. During the 1920s, the population grew dramatically, a number of shops opened in the area around the station and a public hall, the Empire Theatre, opened in 1925, screening movies and hosting dances. The village became a centre for the surrounding farms.

In the 1960s, Sydney's suburban sprawl reached the Quakers Hill area and the five acre farms surrounding the village began to be subdivided. In 1994, HMAS Nirimba, a naval training property on the western side of the suburb, was decommissioned and converted into an educational precinct. In 1996, a new development in the north-east of Quakers Hill was converted into a new suburb, Acacia Gardens.

Public Transport to and from Quakers Hill is provided by train and a number of bus services by Busways. Quakers Hill railway station is on the Richmond branch of the North Shore, Northern & Western Line of the Sydney Trains network.

Quakers Hill has experienced much road development over recent years including the construction of a new road leading directly to the education precinct, bypassing the town centre. The Westlink M7, which links the suburb directly to all major routes in and out of the greater Sydney region, opened in December 2005. Following this opening the road overpass for the Quakers Hill Parkway has been widened from two to four lanes, improving toll-free traffic flow between Richmond and Sunnyholt Roads. The Quakers Hill Parkway bridge (going over the railway line) was recently widened from two to four lanes. 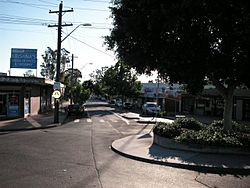 All content from Kiddle encyclopedia articles (including the article images and facts) can be freely used under Attribution-ShareAlike license, unless stated otherwise. Cite this article:
Quakers Hill, New South Wales Facts for Kids. Kiddle Encyclopedia.