The Cumberland Plain Woodland is one of six main indigenous woodland communities of Sydney, New South Wales, Australia, that comprises an open tree canopy, a groundcover with grasses and herbs, usually with layers of shrubs and/or small trees. Situated in the Cumberland Plain, it is made up of dry sclerophyll woodlands, grasslands and/or forests, reminiscent of Mediterranean forests and temperate grasslands.

According to Office of Environment and Heritage, the community falls predominantly within the Coastal Valley Grassy Woodlands region, which are part of the Grassy Woodlands formation found in the eastern corridor New South Wales, barring the coastline.

Currently, less than 6% of the Woodlands remain in small parts distributed across the western suburbs of Sydney, totaling only around 6400 hectares. Cumberland Plain Woodland was listed as an Endangered Ecological Community under the Threatened Species Conservation Act 1995 in June 1997. The greatest threats to the Cumberland Plain Woodland include land clearing for agriculture, urban sprawl and the introduction of harmful weed species.

A typical rural grassland dotted with eucalyptus trees in Luddenham.

In 1877, Cumberland Plain Woodlands covered 107,000 hectares and filled around 30% of the Sydney Basin. At the time of European settlement, the Cumberland Plain contained 1,070 km² of woodlands and forests. The westward expansion of Sydney over the plain has placed enormous pressure on the woodlands and other local ecological communities, only 13% of which remain uncleared.

Situated in the cities of Fairfield, Liverpool, Cumberland, Campbelltown, Blacktown and Penrith, and surrounds, they contain approximately 2000 ha (one-fifth) of the remaining Cumberland Plain Woodland. The ecoregion contains clay soils derived from Wianamatta Shale. The ecoregion is located on a rain shadow area, usually getting 700–900 mm of annual rainfall, to the west of Sydney CBD. Its range does not extend to slightly wetter Sydney Turpentine-Ironbark Forest, or high-rainfall ridges (such as Blue Gum High Forest in the upper North Shore).

The biotic community is mostly found on flat or hilly terrains up to about 350 m in elevation, but it may also be present on locally precipitous sites and at slightly higher elevations. Some parts of the community may have a forest structure. The Woodland features an open tree canopy, groundcover prevailed by grasses and herbs, sometimes with layers of shrubs and small trees. 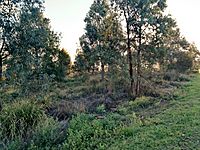 The Cumberland Plain Woodland, classed under Coastal Valley Grassy Woodlands, includes these ecoregions in its realm, with some overlapping and others plainly being sub-ecoregions of the Woodland: 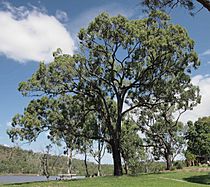 The narrow-leaved ironbark is a large spreading ironbark tree that may reach 35 m (115 ft) in height. 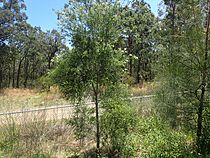 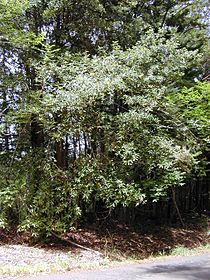 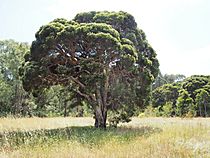 White feather honeymyrtle with lance-shaped leaves that is covered with creamy-coloured flowers.

The sclerophyll woodlands are situated on a nutrient-poor alluvium deposited by the Nepean River from sandstone and shale bedrock in the Blue Mountains. Despite this, they support a tremendous regional biodiversity.

Other eucalyptus species within the Woodland include:

Bird species in the woodland include (which are mostly vulnerable and/or endangered): 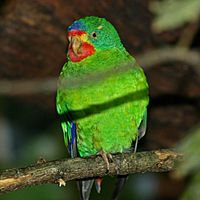 The Swift Parrot is a critically endangered bird species that migrates to the woodland. 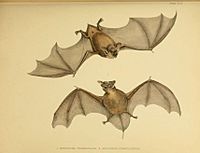 The East-coast free-tailed bat is a vulnerable species.

All content from Kiddle encyclopedia articles (including the article images and facts) can be freely used under Attribution-ShareAlike license, unless stated otherwise. Cite this article:
Cumberland Plain Woodland Facts for Kids. Kiddle Encyclopedia.