Kids Encyclopedia Facts
Not to be confused with Flying squirrel.

This species' home range extends from Bordertown near the South Australian/Victorian Border through south-eastern Australia to northern Queensland. This species was thought to be extinct in South Australia since 1939 until a genetic test confirmed their inhabitance in this area.

The squirrel glider lives in south-eastern Australia in the dry sclerophyll forest and woodlands. In Queensland, however, they occupy a wetter eucalypt forest.

The glider will make a den in the hollow tree and line it with leaves. Here it will sleep and usually lives in groups of one male, 2 females, and offspring.

Like most of the wrist-winged gliders, the squirrel glider is endemic to Australia. It is about twice the size of the related sugar glider (P. breviceps). Its body is 18–23 cm long and its tail measures at 22–33 cm long. It weighs about 230g or 0.5 lbs. They have blue-grey or brown-grey fur on their back and a white belly. The end of their tail is black and they have a black stripe from their eyes to the mid-back. They have a flying membrane that extends from their 5th front toe to the back of their foot on both sides. When they glide their prehensile tail can act as a rudder, allowing them to steer which direction they want to go. They can glide up to 50m from tree to tree. They tend not to glide in captivity.

The breeding season is between June and January. The gestation/pregnancy of a female is 18 days. The litter sizes are usually one to two offspring a year. The offspring will immediately crawl to the mother's marsupium and anchor itself to a teat where it will stay for about 3 months. The mother will wean off her offspring around 4 months while they stay in the den. The offspring become independent at 10 months and go off on their own. The life expectancy is 4–6 years. 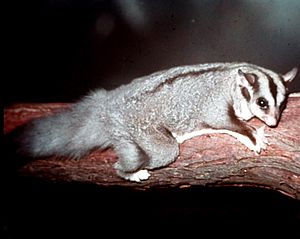 The squirrel glider eats mostly fruit and insects. It also feeds on tree sap, mainly eucalyptus or red bloodwood trees. In order to get the sap the squirrel glider will pierce the trunk of the tree causing sap to flow out of it. It also eats pollen, nectar, leaves, and bark.

Natural predators of the squirrel glider include owls and introduced predators include dogs, cats and foxes. Habitat fragmentation and destruction by human agency is also impacting individual populations. However, due to large population sizes and occurrence in several protected areas, the species is currently classified as Least Concern (i.e. not yet threatened) by the IUCN.

The squirrel glider's closest relatives come from the same genus, Petaurus, and they include the sugar glider (P. breviceps), mahogany glider (P. gracilis), northern glider (P. abidi), Biak glider (P. biacensis) and yellow-bellied glider (P. australis). It is not yet known which species the gliders diverged from. The squirrel glider most likely evolved from a marsupial like a possum that had membranes for gliding. Other animals that have this same ancestor include Striped possum and Leadbeaters possum.

Squirrel gliders are often mistaken for flying squirrels of North America. These two species are not related at all. The flying squirrel is a placental mammal and the squirrel glider is a marsupial like koalas and kangaroos. Both have an adaptation for tree living – Patagia. This is the skin that extends from their front to hind legs allowing them to glide between the trees avoiding predators they might come into contact with on the ground. Because these animals are distantly related we call these characteristics analogous.

Squirrel gliders are able to curl their tails around branches to hold on. This feature is homologous to the ring tail possum (order of Diprodontia) which use their tail as an extra limb to grab hold of trees. It is longer but the squirrel gliders tail is bushier.

All content from Kiddle encyclopedia articles (including the article images and facts) can be freely used under Attribution-ShareAlike license, unless stated otherwise. Cite this article:
Squirrel glider Facts for Kids. Kiddle Encyclopedia.