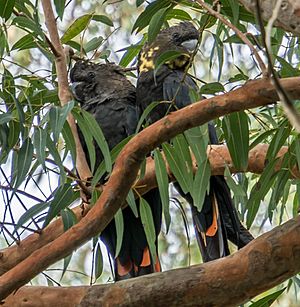 A pair of Glossy Black Cockatoos

The glossy black cockatoo (Calyptorhynchus lathami), is the smallest member of the subfamily Calyptorhynchinae found in eastern Australia. Adult glossy black cockatoos may reach 50 cm (19.5 in) in length. They are sexually dimorphic. Males are blackish brown, except for their prominent red tail bands; the females are dark brownish with some yellow spotting. Three subspecies are recognised.

The glossy black cockatoo's closest relative is the red-tailed black cockatoo; the two species form the subgenus Calyptorhynchus within the genus of the same name. They are distinguished from the other black cockatoos of the subgenus Zanda by their significant sexual dimorphism and calls of the juveniles; one a squeaking begging call, the other a vocalization when swallowing food.

The three subspecies were proposed by Schodde et al. in 1993, although parrot expert Joseph Forshaw has reservations due to their extremely minimal differences.

Like the related red-tailed black cockatoo, this species is sexually dimorphic. The male glossy black cockatoo is predominantly black with a chocolate-brown head and striking caudal red patches. The female is a duller dark brown, with flecks of yellow in the tail and collar. The female's tail is barred whereas the male's tail is patched. An adult will grow to be about 46–50 cm (18–19.5 in) in length. The birds are found in open forest and woodlands, and usually feed on seeds of the she-oak (Casuarina spp.) 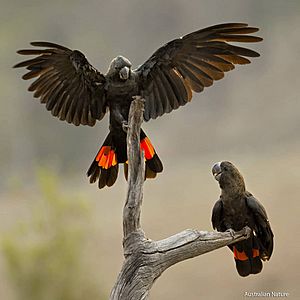 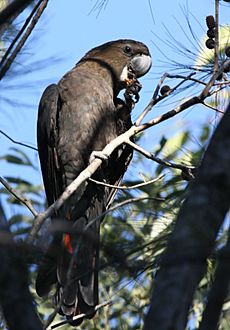 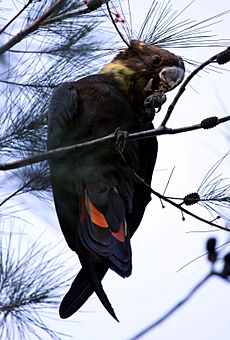 Like most species of parrots, the glossy black cockatoo is protected by the Convention on International Trade in Endangered Species of Wild Fauna and Flora (CITES) with its placement on the Appendix II list of vulnerable species, which makes the import, export, and trade of listed wild-caught animals illegal.

Glossy black cockatoos generally are not listed as threatened on the Environment Protection and Biodiversity Conservation Act 1999, however the Kangaroo Island subspecies (C. l. halmaturinis) was added to the list as endangered.

C. l. lathami is listed as vulnerable by the Queensland, Environmental Protection Agency.

All content from Kiddle encyclopedia articles (including the article images and facts) can be freely used under Attribution-ShareAlike license, unless stated otherwise. Cite this article:
Glossy black cockatoo Facts for Kids. Kiddle Encyclopedia.