Many systematic National and State Parks are distributed throughout New South Wales and Queensland, although the representation of habitats varies throughout the ecoregion. In some areas, eucalyptus woodlands and dry forests have been cleared for urban development or to enhance grazing. Before Europeans first arrived to Australia, the Border Ranges had one of the largest rainforests in Australia.

This ecoregion covers an area between Australia's east coast and the Great Dividing Range, starting just above Eden, New South Wales in the South Coast, which includes (parts of) the Blue Mountains to the west Sydney, and ending in south Queensland's Border Ranges. The Sydney metropolitan area is transitional with regions such as the greater west (or the Cumberland Plain) being virtually excluded from this biome since they predominantly contain dry sclerophyll woodlands and thus would have more in common with Mediterranean forests. Though pockets of forested areas in Sydney, such as those in The Hills Shire to the north and Sutherland Shire to the south, which are relatively wet and therefore lush, do have regions within them that are part of Eastern Australian temperate forests.

Eucalyptus communities meandering the coast in southern Queensland and northern New South Wales are usually wet sclerophyll wet forests, ranging from 30 percent to 70 percent closed canopy cover, with the understorey containing small broadleaved trees, vines, ferns and shrubs. Wet forests are strictly confined in southeastern Queensland. Subtropical rainforest is the most developed community in New South Wales, growing in warm, fecund sites having rainfall higher than 1,300 mm per year. Dry rainforests occur in sites with lower rainfall, ranging from 600 mm to 1,100 mm annual rainfall. Dry rainforest was distributed in southeastern Queensland where it occupied about half a million hectares, though it has now been broadly cleared for agriculture. Warm temperate rainforest is far less diverse than the dry or subtropical region, growing on low-nutrient soils. Mostly found to the southern half of the ecoregion in Sydney (parts of Hornsby Shire and Sutherland Shire), it has transitional elements of Mediterranean vegetation due to abundant of dry sclerophyll plants surrounding it, which are prevalent communities in western Sydney.

The rainforest communities of this region exhibit ecological relations to other regions: the cool temperate rainforest is similar to the biome found in Tasmania, the warm temperate rainforest has links to the North Island of New Zealand, and the subtropical and dry regions are also found up north in the Queensland tropical rain forests ecoregion. The Blue Mountains area has over 90 eucalypt taxa, or 13% of the global dispersion.

These are areas of eucalyptus forest on sandstone plateau, with smaller sections of cliffs, steep gorges with rainforest vegetation and sandy heath on the coasts. The climate is oceanic to the south and humid subtropical to the north. In the central areas of the Blue Mountains, rainfall averages from 1,100 to 1,400 mm annually. Climate in the coastal regions is humid, with excessive rainfall (1200 mm to 1600 mm a year). Rainfall decreases as one moves inland to the New England region with Armidale receiving around 800 mm of rain each year on average. Winters in that city are cold and wet and higher elevations receive snowfall most years. 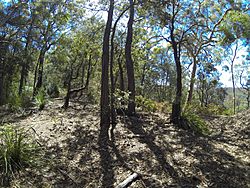 The dominant forest is peppermint eucalyptus trees, indeed it was the moisture from these trees which was originally thought to cause the blue mist that gave the mountains their name. Shrublands, shrubby woodlands (heaths), and affiliated sandplain vegetation are typical of the region's coastal area. The shrub species include, Epacridaceae, Myrtaceae, Rutaceae, Fabaceae, Proteaceae, and Cyperaceae. The Border Ranges is home to more than 1,200 vascular plants.

There are particularly rich collections of endemic plants in a number of areas: the eucalyptus of the Blue Mountains; the rainforests of Border Ranges area in the McPherson Range including Mount Warning, Nightcap National Park, and Lamington National Park including Binna Burra; and the sand dunes of World Heritage Site Fraser Island and the Great Sandy National Park of southern Queensland. There are well-known areas of rainforest protected as the Gondwana Rainforests of Australia, containing distinct areas of subtropical rainforest in New South Wales, dry rainforest of southern Queensland (although most of this has been cleared for agriculture and pine plantations) and warm temperate rainforest south of Sydney. Finally the coasts are covered with shrubs, heath and other sand dune vegetation.

These habitats are vulnerable to ongoing clearance for agriculture and urban development and by fires, while introduced species both weeds and animals, and pollution of water supplies threaten the indigenous wildlife. However, controlled logging of tallowwood, Sydney blue gum, spotted gum, blackbutt, and flooded gum does sustain large areas of these indigenous trees as well as formally protected areas such as those mentioned above and Royal National Park near to Sydney which contains a number of the different habitats described here. Urban areas in this ecoregion include Sydney and Brisbane while resort areas like North Stradbroke Island and Ballina attract visitors to the coast. 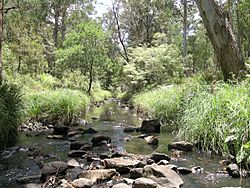 A stream in Werrikimbe National Park in the Mid North Coast of NSW. 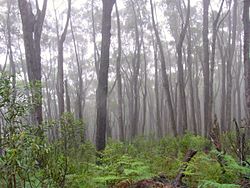 These parks are listed in a north to south order, starting from northern NSW down to the south coast of NSW (to note, not all plant communities within these parks have temperate forests, as some would grade to Mediterranean woodlands and/or subtropical forests, depending on the vicinity):

All content from Kiddle encyclopedia articles (including the article images and facts) can be freely used under Attribution-ShareAlike license, unless stated otherwise. Cite this article:
Eastern Australian temperate forests Facts for Kids. Kiddle Encyclopedia.