Syzygium smithii (formerly Acmena smithii) is a summer-flowering, winter-fruiting evergreen tree, belonging to the myrtle family Myrtaceae. It shares the common name "lilly pilly" with several other plants. In New Zealand, it is commonly known as 'monkey apple'. It is planted as shrubs or hedgerows, and features: rough, woody bark; cream and green smooth, waxy leaves; flushes of pink new growth; and white to maroon edible berries. Unpruned, it will grow about 3–5 m (9.8–16.4 ft) tall in the garden.

Syzygium smithii 's name dates from its 1789 description as Eugenia smithii by French botanist Jean Louis Marie Poiret, its specific name honouring James Edward Smith, who had described it two years earlier as E. elliptica. The name was unusable due to that combination having been used for another species. It gained its current binomial name in 1893 when reclassified in the genus Syzygium by German botanist Franz Josef Niedenzu, and since 2009 the Council of Heads of Australasian Herbaria (CHAH) Australian Plant Census has confirmed the recognition of this current name. The species has been widely known for many years as Acmena smithii, still used in NSW as of 2009[update], in Qld currently as of July 2013[update], and it still occurs today on many older web pages.

The trunk is sometimes buttressed. The bark is brown and scaled and flakes off easily. Its dark green shiny leaves are arranged oppositely on the stems, and are lanceolate or ovate and measure 2–10 by 1–3 cm (1–4 by 0.5–1 in). The cream-white flowers appear from October to March, occurring in panicles at the end of small branches. Berries follow on, appearing from May to August, and are oval or globular with a shallow depression at the top. They measure 0.8 to 2 cm in diameter, and range from white to maroon in colour.

A distinctive narrow leaved form with thin leaves 3–6 cm long is found along rainforest riverbanks from Sydney northwards through Queensland, (rheophytic race) and a small leaved form (known as the small-leaved race or var. minor) with leaves measuring 1.6–6 cm found in dryer rainforests from Colo Heights near Sydney north to the Bunya Mountains.

In New Zealand, where it is known as "monkey apple", the species has become naturalised in forest and scrub and has been classified as an "unwanted organism". In the Waikato region, at least, it can outgrow native canopy tree species such as puriri (Vitex lucens) and taraire (Beilschmiedia tarairi), and become the permanent canopy. 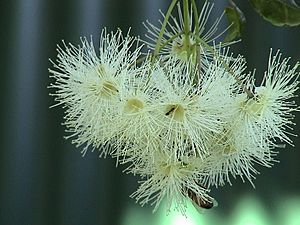 Flowers being pollinated by a bee and an ant 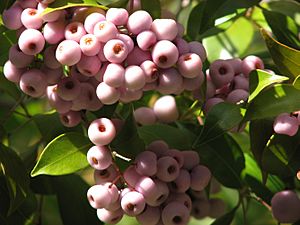 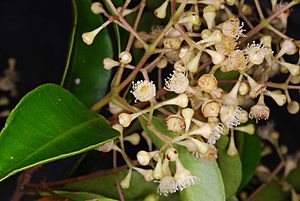 The species was introduced into cultivation as Eugenia elliptica at the Royal Botanic Gardens Kew by Sir Joseph Banks in 1790. Syzygium smithii is widely grown in cultivation as a specimen tree. Noted American landscape architect Thomas Church used the species in gardens that he created in the San Francisco Bay Area in the 1950s. These were often clipped to shape. The species has also been used as a subject for bonsai.

Of the several species grown in cultivation, S. smithii is one of the more resistant to attacks by psyllids. The species can tolerate both full sun and full shade. Established plants withstand dry periods and moderate frost.

Syzygium smithii is listed as a fire retardant species by such authorities as Gosford Council NSW, NSW Fire Service and the Country Fire Authority.

A number of forms have been selected for cultivation, including the following:

The 1889 book The Useful Native Plants of Australia records that Eugenia Smithii was called "Tdgerail" by the Indigenous people of the Illawarra (New South Wales); and "Coochin-coochin" by others in Queensland. It also states that the fruits were eaten by the Indigenous Australians and are acidulous, and wholesome."

All content from Kiddle encyclopedia articles (including the article images and facts) can be freely used under Attribution-ShareAlike license, unless stated otherwise. Cite this article:
Syzygium smithii Facts for Kids. Kiddle Encyclopedia.