The satin bowerbird (Ptilonorhynchus violaceus) is a bowerbird endemic to eastern Australia.

A rare natural intergeneric hybrid between the satin bowerbird and the regent bowerbird is known as Rawnsley's bowerbird. 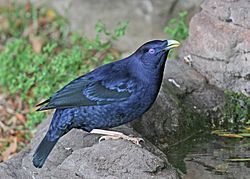 Mature males have violet-blue eyes and are uniformly coloured black, however, light diffraction by the surface texture of the feathers results in an almost metallic sheen giving a deep shiny blue appearance. Immature males are coloured and marked the same as females and are often mistaken for them.

Females might be mistaken for the green catbird or spotted catbird with distinctively green/brown or otherwise entirely brown upper body and lighter under body with a distinct reticulated or scalloped pattern, but with very striking blue eyes.

The satin bowerbird is common in rainforest and tall wet sclerophyll forest in eastern Australia from southern Queensland to Victoria. There is also an isolated population in the Wet Tropics of north Queensland.

Like all Ptilonorhynchidae, satin bowerbirds are predominantly frugivorous as adults, though they also eat leaves and a small amount of seeds and insects. As nestlings, however, they are largely fed on beetles, grasshoppers and cicadas until they can fly.

Satin bowerbirds are not in the least finicky in their food preferences, and have taken extremely readily to the numerous plants introduced since European settlement. Indeed, they are a major dispersal agent for a number of weedy plants, such as camphor laurel, the European olive and various species of privet. They are also often persecuted by horticulturalists because they frequently raid fruit and vegetable crops. Satin bowerbirds are aggressive when foraging, frequently attempting to displace other birds from fruit trees. 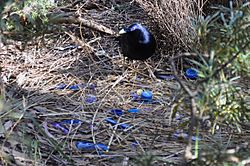 A male building the bower 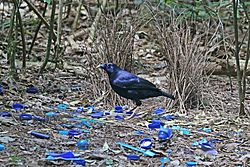 Satin bowerbird at his bower

Like all bowerbirds, the satin bowerbird shows highly complex courtship behaviour. Mate choice in satin bowerbirds has been studied in detail. Males build specialised stick structures, called bowers, which they decorate with blue, yellow, and shiny objects, including berries, flowers, and plastic items such as ballpoint pens, drinking straws and clothes pegs. As the males mature they use more blue objects than other colours. Females visit these and choose which male they will allow to mate with them. In addition to building their bowers, males carry out intense behavioural displays called dances to woo their mates, but these can be treated as threat displays by the females. Nestbuilding and incubation are carried out by the females alone.

Experimental manipulations of the ornaments around the bowers have shown that the choices of young females (those in their first or second year of breeding) are mainly influenced by the appearance of the bowers, and hence by the first stage of this process. Older females, which are less affected by the threatening aspect of the males' displays, make their choices more on the basis of the males' dancing displays. It has been hypothesised that as males mature their colour discrimination develops and they are able to select more blue objects for the bower. It is not yet known whether this description would also hold true for other species of bowerbird.

Satin bowerbirds nest between October and February. Typically two eggs but occasionally one or three are laid in a shallow nest of twigs on top of which are placed leaves of Eucalyptus or Acacia. These leaves turn brown as the eggs are laid, and may serve as camouflage. The eggs are cream but streaked with brown, and are much larger than typical for a bird of its size at around 19 grams (0.67 oz); they are laid every other day and hatch asynchronously after 21 days of incubation.

The young are able to fly three weeks after hatching, but remain dependent on the female for another two months, finally dispersing at the beginning of the southern winter (May or June).

Female satin bowerbirds mature at two to three years but males do not reach maturity until seven or eight years when they have moulted completely into their characteristic blue-black adult plumage. The satin bowerbird is the longest-lived passerine with anything approaching high-quality banding data: it is estimated that the average lifespan of the species is around eight or nine years, while the record longevity in the wild of twenty-six years is the greatest for any banded passerine.

All content from Kiddle encyclopedia articles (including the article images and facts) can be freely used under Attribution-ShareAlike license, unless stated otherwise. Cite this article:
Satin bowerbird Facts for Kids. Kiddle Encyclopedia.