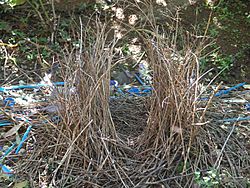 The bower of the Satin Bowerbird

Bowerbirds are the bird family Ptilonorhynchidae. The family has 20 species in eight genera. Bowerbirds are most known for their unique courtship behaviour, where males build a structure and decorate it with sticks and brightly coloured objects. The function of this courtship ritual is to attract a mate. The bowerbirds have a "female choice" mating system.

The bowerbirds have an Austro-Papuan distribution, with ten species endemic to New Guinea, eight endemic to Australia and two found in both. Their distribution is mainly in the tropical parts of New Guinea and northern Australia, though some species extend into central, western and southeastern Australia. They occupy a range of different habitats, including rainforest, eucalyptus and acacia forest, and shrublands.

The birds are medium to large-sized passerines, ranging from the Golden Bowerbird at 22 centimetres (8.7 in) and 70 grams (2.5 oz) to the Great Bowerbird at 40 centimetres (16 in) and 230 grams (8.1 oz). Their diet consists mainly of fruit but may also include insects (especially for nestlings), flowers, nectar and leaves in some species. The Satin and Spotted Bowerbirds are sometimes regarded as pests because they feed on introduced fruit and vegetable crops. They have occasionally been killed by affected farmers.

The Ailuroedus catbirds are monogamous, with males raising chicks with their partner, but all other bowerbirds are polygynous, with the female building the nest and raising the young alone. These latter species are commonly dimorphic, with the female being more drab in color. Female bowerbirds build a nest by laying soft materials, such as leaves, ferns, and vine tendrils, on top of a loose foundation of sticks.

In courtship the male bowerbird will dance to the female in an attempt to attract her.

All Papuan bowerbirds lay one egg, while Australian species lay one to three with laying intervals of two days. Bowerbird eggs are around twice the weight of those of most passerines of similar size – for instance eggs of the satin bowerbird weigh around 19 grams (0.67 oz) as against a calculated 10 grams (0.35 oz) for a passerine weighing 150 grams (5.3 oz). Eggs hatch after 19 to 24 days, depending on the species and are a plain cream color for catbirds and the tooth-billed bowerbird, but in other species possess brownish wavy lines similar to eggs of Australo-Papuan babblers. In accordance with their lengthy incubation periods, bowerbirds that lay more than one egg have asynchronous hatching, but siblicide has never been observed.

Bowerbirds as a group have the longest life expectancy of any passerine family with significant banding studies. The two most studied species, the green catbird and satin bowerbird, have life expectancies of around eight to ten years and one satin bowerbird has been known to live for twenty-six years. For comparison, the common raven, the heaviest passerine species with significant banding records, has not been known to live longer than 21 years.

The most notable characteristic of bowerbirds is their extraordinarily complex courtship and mating behaviour, where males build a bower to attract mates. There are two main types of bowers. One clade of bowerbirds build so-called maypole bowers, which are constructed by placing sticks around a sapling; in some species, these bowers have a hut-like roof. The other major bowerbuilding clade builds an avenue type-bower made of two walls of vertically placed sticks. In and around the bower, the male places a variety of brightly colored objects he has collected. These objects – usually different among each species – may include hundreds of shells, leaves, flowers, feathers, stones, berries, and even discarded plastic items, coins, nails, rifle shells, or pieces of glass. The males spend hours arranging this collection. Bowers within a species share a general form but do show significant variation, and the collection of objects reflects the biases of males of each species and its ability to procure items from the habitat, often stealing them from neighboring bowers. Several studies of different species have shown that colors of decorations males use on their bowers match the preferences of females. 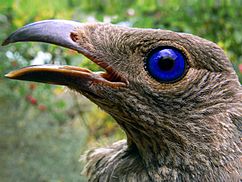 Uy and collaborators have shown that mate-searching females commonly visit multiple bowers, often returning to the male several times, watching his elaborate courtship displays and inspecting the quality of the bower and tasting the paint the male has placed on the bower walls. Many females end up selecting the same male. Females mated with top-mating males tend to return to the male the next year and search less. 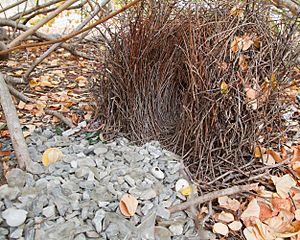 Bower of a great bowerbird

Ernest Thomas Gilliard suggested the transfer effect, in which he claimed that there is an inverse relationship between bower complexity and the brightness of plumage. Gilliard suggests that there is an evolutionary "transfer" of ornamentation in some species, from their plumage to their bowers, in order to reduce the visibility of the male and thereby its vulnerability to predation. This hypothesis is not well supported because species with vastly different bower types have similar plumage. In toothbilled bowerbirds that have no bowers. Recent studies with robot female bowerbirds by Patricelli and collaborators have shown that males react to female signals of discomfort during courtship by reducing the intensity of their potentially threatening courtship. Coleman and colleagues found that young females tend to be more easily threatened by intense male courtship, and these females tend to choose males based on traits not dependent on male courtship intensity.

The high degree of effort directed at mate choice by females and the large skews in mating success directed at males with quality displays suggests that females gain important benefits from mate choice. Since males have no role in parental care and give nothing to females except sperm, it is suggested that females gain genetic benefits from their mate choice. However this has not been established, in part because of the difficulty of following offspring performance since males take seven years to reach sexual maturity. One hypothesis for the evolutionary causation of the bowerbuilding display is Hamilton and Zuk's "bright bird" hypothesis, which states that sexual ornaments are indicators of general health and heritable disease resistance. Doucet and Montgomerie

This complex mating behaviour, with its highly valued types and colors of decorations, has led some researchers to regard the bowerbirds as among the most behaviorally complex species of bird. It also provides some of the most compelling evidence that the extended phenotype of a species can play a role in sexual selection and indeed act as a powerful mechanism to shape its evolution, as seems to be the case for humans. Inspired by their seemingly extreme courtship rituals, Charles Darwin discussed both bowerbirds and birds-of-paradise in his writings.

In addition, many species of bowerbird are superb vocal mimics. MacGregor's bowerbird, for example, has been observed imitating pigs, waterfalls, and human chatter. Satin bowerbirds commonly mimic other local species as part of their courtship display.

Bowerbirds have also been observed creating optical illusions in their bowers to appeal to mates. They arrange objects in the bower's court area from smallest to largest, creating a forced perspective which holds the attention of the female for longer. Males with objects arranged in a way that have a strong optical illusion are likely to have higher mating success.

All content from Kiddle encyclopedia articles (including the article images and facts) can be freely used under Attribution-ShareAlike license, unless stated otherwise. Cite this article:
Bowerbird Facts for Kids. Kiddle Encyclopedia.