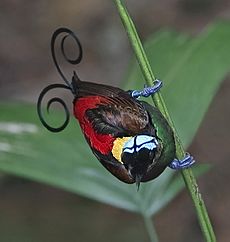 The birds of paradise are songbirds of the family Paradisaeidae. They live in eastern Indonesia, Maluku, Papua New Guinea, Torres Strait Islands, and eastern Australia. Best known are the members of the genus Paradisaea, including the type species, the greater bird-of-paradise, Paradisaea apoda.

They live in tropical forests like rainforests, swamps and moss forest and build their nests from soft materials, such as leaves, ferns, and vine tendrils, typically placed in a tree fork.

They are best known for the remarkable plumage and behaviour of the males. They are an extreme example of how sexual selection works. Females choose males who they instinctively see are fine specimens of their species. The colours of the plumage, the construction of the nest, the song and the mating dance all play a part. In some species the pairing is monogamous, and in others the males are polygamous. If they are monogamous, the males look much like the females. If they are polygamous, the males are very much flashier than the females. In both cases, it is the female who makes the choice of partner. 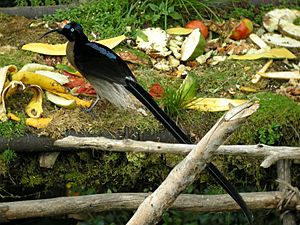 Birds-of-paradise are closely related to the corvids. Birds-of-paradise range in size from the king bird-of-paradise at 50 g (1.8 oz) and 15 cm (5.9 in) to the curl-crested manucode at 44 cm (17 in) and 430 g (15 oz). The male black sicklebill, with its long tail, is the longest species at 110 cm (43 in). In most species, the tails of the males are larger and longer than the female, the differences ranging from slight to extreme. The wings are rounded and in some species structurally modified on the males in order to make sound. There is considerable variation in the family with regard to bill shape. Bills may be long and decurved, as in the sicklebills and riflebirds, or small and slim like the Astrapias. As with body size bill size varies between the sexes, although species where the females have larger bills than the male are more common, particularly in the insect eating species.

Plumage variation between the sexes is closely related to breeding system. The female plumage of the dimorphic species is typically drab to blend in with their habitat, unlike the bright attractive colors found on the males. Younger males of these species have female-like plumage, and sexual maturity takes a long time, with the full adult plumage not being obtained for up to seven years. This affords the younger males the protection from predators of more subdued colours, and also reduces hostility from adult males.

The centre of bird-of-paradise diversity is the large island of New Guinea; all but two genera are found in New Guinea. The two that are not are the monotypic genera Lycocorax and Semioptera, both of which are endemic to the Maluku Islands, to the west of New Guinea. Of the riflebirds in the genus Ptiloris, two are endemic to the coastal forests of eastern Australia, one occurs in both Australia and New Guinea, and one is only found in New Guinea. The only other genus to have a species outside New Guinea is Manucodia, one representative of which is found in the extreme north of Queensland. The remaining species are restricted to New Guinea and some of the surrounding islands. Many species have highly restricted ranges, particularly a number of species with restricted habitat types such as mid-montane forest (like the black sicklebill) or island endemics (like the Wilson's bird-of-paradise).

The majority of birds-of-paradise live in tropical forests, including rainforest, swamps and moss forest, nearly all of them solitary tree dwellers. Several species have been recorded in coastal mangroves. The southernmost species, the paradise riflebird of Australia, lives in sub-tropical and temperate wet forests. As a group the manucodes are the most plastic in their habitat requirements, with in particular the glossy-mantled manucode inhabiting both forest and open savanna woodland. Mid-montane habitats are the most commonly occupied habitat, with thirty of the forty species occurring in the 1000–2000 m altitudinal band. 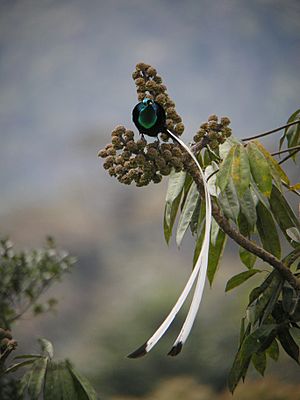 The diet of the birds-of-paradise is dominated by fruit and arthropods, although small amounts of nectar and small vertebrates may also be taken. The ratio of the two food types varies by species, with fruit predominating in some species, and arthropods dominating the diet in others. The ratio of the two will affect other aspects of the behaviour of the species, for example frugivorous species tend to feed in the forest canopy, whereas insectivores may feed lower down in the middle storey. Frugivores are more social than the insectivores, which are more solitary and territorial.

Even the birds-of-paradise that are primarily insect eaters will still take large amounts of fruit; and the family is overall an important seed disperser for the forests of New Guinea, as they do not digest the seeds. Species that feed on fruit will range widely searching for fruit, and while they may join other fruit eating species at a fruiting tree they will not associate with them otherwise and will not stay with other species long. Fruit are eaten while perched and not from the air, and birds-of-paradise are able to use their feet as tools to manipulate and hold their food, allowing them to extract certain capsular fruit. There is some niche differention in fruit choice by species and any one species will only consume a limited number of fruit types compared to the large choice available. For example, the trumpet manucode and crinkle-collared manucode will eat mostly figs, whereas the Lawes's parotia focuses mostly on berries and the superb bird-of-paradise and raggiana bird-of-paradise take mostly capsular fruit.

Most species have elaborate mating rituals, with the Paradisaea species using a lek-type mating system. Others, such as the Cicinnurus and Parotia species, have highly ritualised mating dances. Males are polygamous in the sexually dimorphic species, but monogamous in at least some of the monomorphic species. Hybridisation is frequent in these birds, suggesting the polygamous species of bird of paradise are very closely related despite being in different genera. Many hybrids have been described as new species, and doubt remains regarding whether some forms, such as Rothschild's lobe-billed bird of paradise, are valid. Despite the presence of hybrids, some ornithologists hypothesise that at least some putative hybrids are valid species that may be extinct.

Birds-of-paradise build their nests from soft materials, such as leaves, ferns, and vine tendrils, typically placed in a tree fork. The typical number of eggs in each clutch varies among the species and is not known for every species. For larger species, it is almost always just one egg, but smaller species may produce clutches of 2–3. eggs Eggs hatch after 16–22 days, and the young leave the nest at between 16 and 30 days of age. 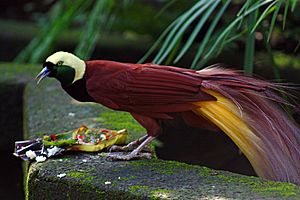 Societies of New Guinea often use bird-of-paradise plumes in their dress and rituals, and the plumes were popular in Europe in past centuries as adornment for ladies' millinery. Hunting for plumes and habitat destruction have reduced some species to endangered status; habitat destruction due to deforestation is now the predominant threat.

Best known are the members of the genus Paradisaea, including the type species, the greater bird-of-paradise, Paradisaea apoda. This species was described from specimens brought back to Europe from trading expeditions in the early sixteenth century. These specimens had been prepared by native traders by removing their wings and feet so that they could be used as decorations. This was not known to the explorers, and in the absence of information many beliefs arose about them. They were briefly thought to be the mythical phoenix. The often footless and wingless condition of the skins led to the belief that the birds never landed but were kept permanently aloft by their plumes. The first Europeans to encounter their skins, were the voyagers of Magellan's circumnavigation of the Earth. Antonio Pigafetta, wrote that they "The people told us that those birds came from the terrestrial paradise, and they call them bolon diuata, that is to say, 'birds of God". This is the origin of both the name "bird of paradise" and the specific name apoda – without feet. An alternate account by Maximilianus Transylvanus used the term Mamuco Diata, a variant of Manucodiata, which was used as a synonym for birds-of-paradise up to the 19th century.

All content from Kiddle encyclopedia articles (including the article images and facts) can be freely used under Attribution-ShareAlike license, unless stated otherwise. Cite this article:
Bird-of-paradise Facts for Kids. Kiddle Encyclopedia.