The British zoologist Philip Lutley Sclater named this species after Dr. Peter Comrie, who discovered the bird on Fergusson Island in 1874.

These birds mainly live in the upper montane rainforest, forest edges and woodland, but also in the wooded savannah, in parks and gardens. 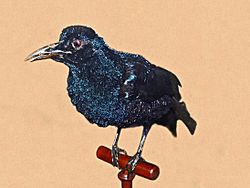 The curl-crested manucode is the largest species of manucode, and also the largest and heaviest species in its family in terms of body size, weighing up to 450 grams though its tail is shorter than the black sicklebill.

Although not the most vibrant in appearance, the curl-crest manucode is certainly a vocally evolved species. In most birds, the trachea extends straight from the mouth to the lungs, whereas in this species, it extends towards the lower chest area and coils back through the abdominal cavity and then reaches the lungs, which works like a wind instrument and gives the curl-crested manucode a characteristic mellow, fluting sound which is audible from a considerable distance.

These vocalizations are common in courtship displays, where the males follow insistently the females among the vegetation spreading their wings and tail and raising their bodies in a strutting fashion. Manucode pairs also vocalize to defend their territories from invading pairs.

Their diet of consists mainly of ripe fruits, feeding mostly on figs, but also on insects and other small invertebrates. They usually live in pairs or in small groups in a single territory.

All content from Kiddle encyclopedia articles (including the article images and facts) can be freely used under Attribution-ShareAlike license, unless stated otherwise. Cite this article:
Curl-crested manucode Facts for Kids. Kiddle Encyclopedia.