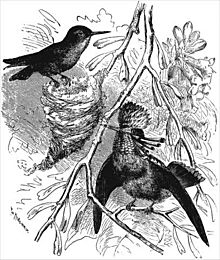 Illustration from The Descent of Man and selection in relation to sex by Charles Darwin showing the Tufted Coquette Lophornis ornatus, female on left, ornamented male on right.

Sexual selection is a special kind of natural selection. It is a theory of Charles Darwin that certain traits can be explained by competition within a species.

Darwin defined sexual selection as the effects of the "struggle between the individuals of one sex, generally the males, for the possession of the other sex". It is usually males who fight each other. Traits selected by male combat are called secondary sexual characteristics (including horns, antlers, etc.) and sometimes referred to as 'weapons'. Traits selected by mate choice are called 'ornaments'.

Females often prefer to mate with males with external ornaments—exaggerated features of morphology. Genes that enable males to develop impressive ornaments or fighting ability may simply show off greater disease resistance or a more efficient metabolism—features that also benefit females. This idea is known as the 'good genes' hypothesis. Sexual selection is still being researched and discussed today.

Competition between members of the same species

Today, biologists would say that certain evolutionary traits can be explained by competition between members of the same species. Competition can be before or after mating.

Competition between males and females

All content from Kiddle encyclopedia articles (including the article images and facts) can be freely used under Attribution-ShareAlike license, unless stated otherwise. Cite this article:
Sexual selection Facts for Kids. Kiddle Encyclopedia.