Courtship in animals facts for kids 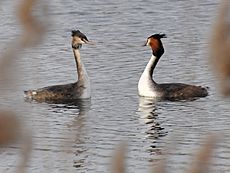 This is a fairly routine greeting: both birds are calm. They go in for bouts of ritual head-shaking in this position. 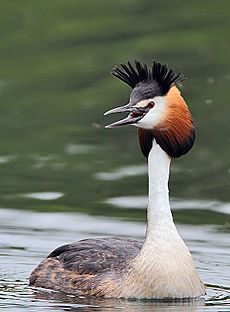 When the birds are more excited, the crown comes up, and the neck-ruff fluffs up.

Courtship in animals is the behaviour by which different species select their partners for reproduction. Usually, the male starts the courtship, and the female chooses to either mate or reject the male based on his "performance".

Many animals have mate-selection courtship rituals. Animal courtship may involve complicated dances or touching, vocalizations, or displays of beauty or fighting prowess. One animal whose courtship rituals are well studied is the bowerbird, whose male builds a "bower" of collected objects. Another is the Great Crested Grebe, whose courtship dances were first described by Julian Huxley.

In cases like the Great Crested Grebe, the pairs form life (or at least long-lasting) partnerships. In that case, there are also pair-bonding dances throughout the mating season, and through the whole period of raising the young. If pairs get separated, there are exceptionally vigorous dances when they come together. There are a number of "dance routines" which occur in the different circumstances of life. All this behaviour is inherited, though the individual bird remembers the place and the partner permanently.

It might be thought that courtship only occurs in the kind of animals which have fairly complex brains, such as mammals and birds. This is not the case. Male Drosophila flies have to do a mating dance in front of the female before she will allow them to mate. If the dance is not "correct" for that species, she refuses the male. It was discovered over fifty years ago that, if the male carries a mutation which disrupts the dance, he cannot achieve mating: the females reject him. This behaviour is clearly advantageous to the female, whose genes have a better chance of contributing to the next generation if her partner is biologically fit. Drosophila are by no means the only insects which have mating rituals.

All content from Kiddle encyclopedia articles (including the article images and facts) can be freely used under Attribution-ShareAlike license, unless stated otherwise. Cite this article:
Courtship in animals Facts for Kids. Kiddle Encyclopedia.