The Australian king parrot (Alisterus scapularis) is endemic to eastern Australia ranging from Cooktown in Queensland to Port Campbell in Victoria. Found in humid and heavily forested upland regions of the eastern portion of the continent, including eucalyptus wooded areas in and directly adjacent to subtropical and temperate rainforest. They feed on fruits and seeds gathered from trees or on the ground.

Two subspecies are recognised, which are differentiated by size: 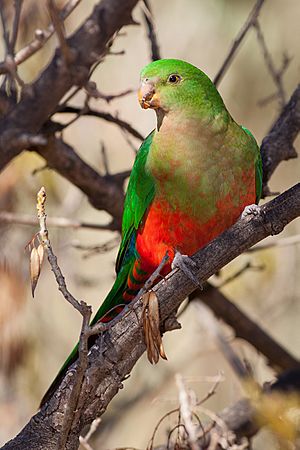 Adults of both sexes are about 43 cm (17 in) in length, including the long, broad tail. The adult male has a red head, breast, and lower undersides, with a blue band on the back of the neck between the red above and green on the back, the wings are green and each has a pale green shoulder band, the tail is green, and the rump is blue. The male has a reddish-orange upper mandible with a black tip, a black lower mandible with an orange base, and yellow irises. The plumage of the female is very different from the male having a green head and breast, a grey beak, and the pale shoulder band is small or absent. Juveniles of both sexes have brown irises and a yellowish beak, and otherwise resemble the female.

The two subspecies are A. s. minor, found at the northern limit of the species range and is similar in appearance to the nominate subspecies but smaller, typically about 5 cm (2 in) smaller in length.

On those rare individuals which have areas without melanin, feathers are orange to yellow. Such a bird can look startingly different from the more common scarlet and green variety.

Australian king parrots range from north and central Queensland to southern Victoria. They are frequently seen in small groups with various species of rosella. Further from their normal eastern upland habitat, they are also found in Canberra during winter, the outer western suburbs and north shore of Sydney, and the Carnarvon Gorge in central Queensland.

In their native Australia, king parrots are occasionally bred in aviaries and kept as calm and relatively quiet household pets if hand-raised. They tend to be selective in their choice of seeds they eat and tend not to ingest small seeds in pre-packaged retail bags. They are relatively unknown outside Australia. As pets, they have limited "talking" ability and normally prefer not to be handled, but they do bond readily to people and can be very devoted. Life expectancy in the wild is unknown, but some pets have been known to live up to 25 years.

All content from Kiddle encyclopedia articles (including the article images and facts) can be freely used under Attribution-ShareAlike license, unless stated otherwise. Cite this article:
Australian king parrot Facts for Kids. Kiddle Encyclopedia.