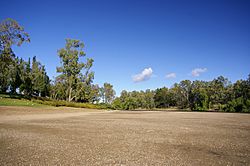 An example of temperate grassland in Wagga Wagga with scattered trees and shrubs.

It is a dry area of low hills and valleys of which the southern section is the wheat-growing plain known as the Riverina and the northern section is low hills and plains mostly used for grazing sheep running north to the plains of the Darling River basin and the New South Wales–Queensland border. Rivers of the savanna include the Murray River and the Murrumbidgee in the south and the Darling River in the north. Rainfall is low and irregular, from 300–500 mm per year becoming less the further westward and inland you go.

The ecoregion as defined by WWF includes the Darling Riverine Plains, Cobar Peneplain, and Riverina IBRA regions, along with the southern portion of the Brigalow Belt South in New South Wales. 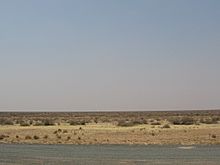 A temperate grassland in Hay, which borders the semi-arid zone.

The dry climate sustains hardy shrubs and grasses scattered with small patches of the bimble box and coolibah eucalyptus trees that once covered most of this part of Australia. The Riverina area nearer the coast contains red river gum (Eucalyptus camaldulensis) and black box (Eucalyptus largiflorens).

The effect of massive numbers of sheep on the grassland was dramatic and was noted by settlers in the grassland regions. The original soil of the grasslands was soft and absorbed rain readily, but heavy continuous stock grazing drove a degradation sequence that shifted the botanical composition of native grasslands from an ecosystem regulated by large, perennial tussock grasses such as Themeda triandra (Kangaroo Grass) to one containing abundant disturbance tolerant native grasses such as Rytidosperma spp.

These grasslands are the western limit for much of the wildlife that lives here as further west is desert. Wildlife of the savanna includes mammals such as the mouse-like kultarr marsupial (Antechinomys laniger), tiger quoll (Dasyurus maculatus), and brush-tailed rock-wallaby (Petrogale penicillata). The western barred bandicoot (Perameles bougainville fasciata) and bridled nail-tail wallaby that once lived here are now presumed extinct in New South Wales.

Active preservation of habitats is required because much of the savanna has been converted to pasture or wheatland. This is particularly so in the Riverina where most has been cleared for wheat planting, a process that is ongoing, while the grasslands are vulnerable to overgrazing, and rivers including the Murray and Murrumbidgee are depleted by being water sources for large irrigation projects. As land is cleared it becomes habitat for invasive species such as noisy miner bird (Manorina melanophrys) and Australian raven (Corvus coronoides).

All content from Kiddle encyclopedia articles (including the article images and facts) can be freely used under Attribution-ShareAlike license, unless stated otherwise. Cite this article:
Southeast Australia temperate savanna Facts for Kids. Kiddle Encyclopedia.