The brush-tailed rock-wallaby or small-eared rock-wallaby (Petrogale penicillata) is a kind of wallaby. It is one of several rock-wallabies in the genus Petrogale. It lives in the rocks and cliffs of the Australia's Great Dividing Range from about 100 km (62 mi) north-west of Brisbane to the Grampians in south west Victoria. Its habitats include rainforest and dry sclerophyl forests. Numbers of brush-tailed rock-wallabies have gone down in the south and west of its range. It remains locally common in northern New South Wales and southern Queensland. In Victoria the species is nearly extinct with only four in the Grampians National Park, and 20 in East Gippsland. In 1988 at Jenolan caves in New South Wales, about 80 wallabies were released into the forest, but by 1992 there were only seven left.

In the late 1800s, Governor Grey introduced this and four other species of wallabies (including the rare parma wallaby) to islands in Hauraki Gulf, near Auckland, New Zealand, where they became well-established. In modern times, the wallabies have come to be viewed as exotic pests. They have caused problems for the native plants and animals and are being removed from the islands. Between 1967 and 1975, 210 rock-wallabies were captured on Kawau Island and returned to Australia, along with thousands of other wallabies. Rock-wallabies were removed from Rangitoto and Motutapu Islands during the 1990s. Another 33 rock-wallabies were captured on Kawau during the 2000s, and returned to Australia.

In 2003 some Kawau brush-tails were relocated to the Waterfall Springs Conservation Park north of Sydney, New South Wales, for captive breeding purposes.

Two wallabies escaped in 1916 on the island of Oahu in Hawaii. There is now a small breeding population. 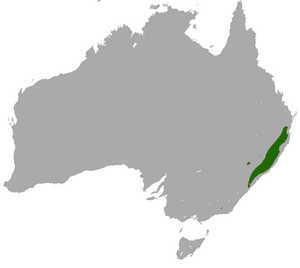 All content from Kiddle encyclopedia articles (including the article images and facts) can be freely used under Attribution-ShareAlike license, unless stated otherwise. Cite this article:
Brush-tailed rock-wallaby Facts for Kids. Kiddle Encyclopedia.