The swift parrot (Lathamus discolor), is a species of broad-tailed parrot, only found in southeastern Australia. The species breeds in Tasmania during the summer and migrates north to south eastern mainland Australia from Griffith-Warialda in New South Wales and west to Adelaide in the winter. It is a nomadic migrant, and it settles in an area only when there is food available. The species is critically endangered and the severe predation of sugar gliders (Petaurus breviceps) on breeding females and nests. Sugar glider predation is worst where logging is severe, so these threats interact in Tasmania. Genetic evidence for the effective population size suggests that the minimum potential population size is now fewer than 300 individual swift parrots. The genetic evidence supports the results of earlier studies that use demographic information about swift parrots to show the species could be extinct by 2031.

The surgeon John White described the swift parrot in 1790 as the red-shouldered paroquet (Psittacus discolor). It was placed in the genus Lathamus by René Primevère Lesson in 1830.

A 2011 genetic study including nuclear and mitochondrial DNA found that the swift parrot was an early offshoot from a lineage giving rise to the genera Prosopeia, Eunymphicus and Cyanoramphus, diverging around 14 million years ago.

The swift parrot is about 25 centimetres (9.8 in) long and has long pointed wings and long tapering tail feathers. It is mainly green with bluish crown and red on the face above and below the beak. The adult female is slightly duller, and the juvenile has a dark brown iris and a pale orange bill. The forehead to throat is crimson and there is also crimson patch at the top, edge of the wing. They are noisy, always active and showy, and are very fast with their direct flight.

The species breeds in Tasmania from September to February. It nests in tree cavities, but is highly selective in the types of cavities it uses as nests. It prefers cavities with small entrances, deep chambers and wide floors. Tree cavities with these traits are rare and comprise only 5% of the available cavities in Tasmanian forests. These cavities are more likely to occur in large trees. These characteristics of tree cavities are important for passive defense of their nests against native Tasmanian predators. Tree cavities suitable for nesting are highly vulnerable to disturbance. Wildfire caused the collapse of 62.8% of known swift parrot nest cavities (and 48.6% of nesting trees). Deforestation (primarily driven by native forest logging) has been an important contemporary cause of habitat loss for swift parrots. In just one area of swift parrot breeding habitat, the southern forests, 33% of total forest cover was lost/disturbed by logging between 1996–2016, and 23% of potential swift parrot nesting habitat was logged over this same time period. The local extent of deforestation is also positively correlated with other threats to the parrots like predation by sugar gliders. 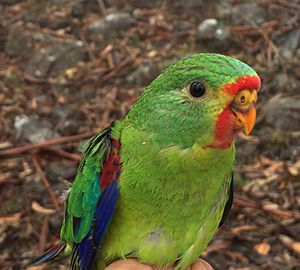 A juvenile swift parrot in Tasmania.

Swift parrots select where to breed in Tasmania based on the local availability of both food and nesting sites. The parrots settle wherever in Tasmania their preferred food (nectar from flowering Eucalyptus globulus and Eucalyptus ovata) is abundant, but birds can only breed where suitable nesting sites are also available nearby. Because swift parrots prefer to breed in the most resource rich patch of food, they are able to rear their nestlings in the 'best' conditions each year. Successful swift parrot nests have a mean clutch sizes of 3.8 eggs, and produce 3.2 fledglings, equating to breeding success of 86.9%. However sugar gliders, which are introduced to Tasmania, are a major nest predator of swift parrots. Sugar gliders can result in locally severe parrot nesting failure, and there is a positive relationship between the severity of glider predation and land-cover of mature forest within 500m of a swift parrot nest. This relationship means that in locations where forest cover is low and disturbed, nest failure of swift parrots can be as high as 100%. Sugar gliders are tolerant of forest disturbance, and have high rates of occupancy of swift parrot habitat in Tasmania. On offshore islands where sugar gliders are absent, swift parrots have higher breeding success.

Genetic evidence has shown that the swift parrot is a single, genetically mixed and nomadic population that moves around the landscape each year. Because they are nomadic, swift parrots can occur across a very large potential area, but settlement at a given location depends on the local availability of food. However, in the Tasmanian breeding range, swift parrots need both food and suitable nesting sites to occur in close proximity in order to nest at a given site. The swift parrot migrates each year across Bass Strait between Tasmania and the mainland of Australia. They arrive in Tasmania during September and return to south-eastern Australia during March and April. They can be found as far north as south-eastern Queensland and as far west as Adelaide in South Australia, although recent sightings have been restricted to the south-eastern part of the state. Because swift parrots are nomadic migrants, their occurrence at any one location are difficult to predict. Although they will repeatedly return to the same locations, local occurrence may only happen intermittently depending on whether or not food (flowering trees) is available in a given year. 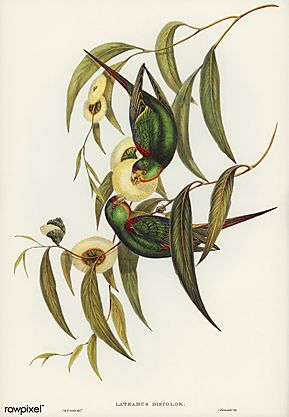 BirdLife International has identified the following sites as being important for swift parrots:

Modelling of demographic data predicted that the swift parrot is Critically Endangered. Further modelling showed that other aspects of their life history (sex ratio bias and shared paternity) makes their population declines worse than originally predicted. Genetic evidence showed there is only one swift parrot population, so threats at different times and places can potentially act on the entire population. Although expert opinion has estimated the species population size as approximately 2,000 individuals, recent genetic evidence suggests this is overly optimistic, and that the (minimum) census size of the population may be lower than 300 individuals. Severe deforestation of their breeding range has been long recognised as the principal threat to the species. Logging has already had severe impacts on habitat availability in recent decades and there is evidence that up to 23% of swift parrot breeding habitat has been logged just in the Southern Forests region of Tasmania over the last 20 years. Deforestation also affects the rate of predation by sugar gliders – where mature forest cover is diminished, parrots suffer worse predation rates.

Given the severity of deforestation across the breeding range, and the relationship between deforestation and sugar glider predation intensity, habitat loss in critical breeding areas of Tasmania may be the species most severe threat. Unfortunately, there is evidence that weak and ineffective policy for protection of threatened species in Tasmania's logged forests is likely to continue to threaten the swift parrot into the future.

The swift parrot has been studied since 2009 by the Difficult Bird Research Group at the Fenner School of Environment and Society of The Australian National University. Below are their research findings:

All content from Kiddle encyclopedia articles (including the article images and facts) can be freely used under Attribution-ShareAlike license, unless stated otherwise. Cite this article:
Swift parrot Facts for Kids. Kiddle Encyclopedia.