The Capertee Valley (pronounced Kay-per-tee) is a large canyon in New South Wales, Australia, 135 km (84 mi) north-west of Sydney that is noted to be the second largest (in terms of width) of any Canyon in the world, toppling The Grand Canyon. It's located 135 km (84 mi) kilometres north-west of Sydney, between Lithgow and Mudgee, in the Central Tablelands, just above the Blue Mountains.

The only population centre of any kind is the village of Glen Davis, which includes a camp-site and often serves as a starting-point for bushwalks around the Capertee River and other parts of the Wollemi National Park.

The valley follows the Capertee River as it cuts through the Sydney Basin, a sedimentary basin consisting of Permian and Triassic sedimentary rock west of the Blue Mountains. Sandstone cliffs and limestone formations predominate the escarpment, which descend into a deep chasm sculpted into the environment over millions of years.

One of the most prominent features of the valley is Pantony's Crown, a sandstone butte that is now part of the Gardens of Stone National Park. Capertee Valley is only 1 kilometre wider than the Grand Canyon, but not as deep. 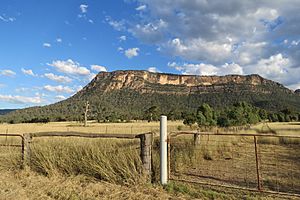 Farmland with a sandstone cliff in background.

The original inhabitants of the land surrounding the valley were the Aboriginal Wiradjuri people, as shown by the 2,000-year-old rock art in the area which feature stencilled hands, boomerangs and throwing sticks. 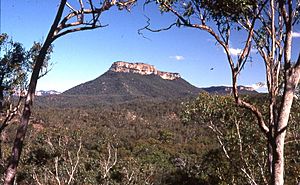 The canyon was first crossed by English explorer James Blackman in 1821. In the 1840s, sheep farming in the area produced quality wool. The area is patterned with old bush tracks, bridle paths and dray tracks from Nulla Mountain to Putty. From 1851, the Australian gold rush increased the colony's population where the Capertee Village developed from small accommodation inns. The area's wealth and value grew as coal, shale-oil and limestone were discovered and mined there.

In 1882, the railway was established, in addition to new homes, inns, a post office and the Glen Davis Shale Oil Works, a shale oil extraction. The village became a rest stop for travellers to Mudgee due to the good water supply in the area. Henry Lawson mentions the valley in his 1891 poem Song of the Old Bullock Driver. In 1920s, bushrangers hid their stolen cattle in the valley. The valley gained importance in the 1930s for its immense geological deposits that laid beneath it and an art deco hotel was constructed.

The valley is classified by BirdLife International as an Important Bird Area because it is the most important breeding site for the endangered regent honeyeater. It also supports populations of the painted honeyeater, rockwarbler, swift parrot, plum-headed finch and diamond firetail.

In the US published book Fifty Places to Go Birding Before You Die, author Chris Santella lists Capertee Valley as one of only two locations in Australia selected in his top 50 world bird watching locations.

Panoramic view of the Capertee Valley

All content from Kiddle encyclopedia articles (including the article images and facts) can be freely used under Attribution-ShareAlike license, unless stated otherwise. Cite this article:
Capertee Valley Facts for Kids. Kiddle Encyclopedia.