The suburb is the administrative centre and Central Business District of the Central Coast region, which is the third largest urban area in New South Wales after Sydney and Newcastle. Following its formation from the combination of the previous Gosford City Council and Wyong Shire Councils, Gosford has been earmarked as a vital CBD spine under the NSW Metropolitan Strategy. The population of the Gosford area was 169,053 in 2016.

Until white settlement, the area around Gosford was inhabited by the Guringai peoples, who were principally coastal-dwellers, and the Darginüng people that inhabited the hinterland. Along with the other land around the Hawkesbury River estuary, the Brisbane Water district was explored during the early stages of the settlement of New South Wales. In the early 19th century some pioneering European settlers began occupying the land, for timber-cutting (mainly ironbark and Australian red cedar), lime production and grazing.

Gosford itself was explored by Governor Phillip between 1788 and 1789. The area was difficult to access and settlement did not start before 1823. By the late 19th century the agriculture in the region was diversifying, with market gardens and citrus orchards occupying the rich soil left after the timber harvest. The road between Hawkesbury (near Pittwater) and Brisbane Water was a cart wheel track even in 1850. 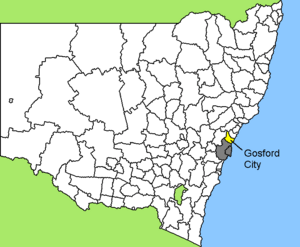 Convicts once lived and worked in the Gosford area. In 1825, Gosford's population reached 100, of whom 50% were convicts.

East Gosford was the first centre of settlement. Gosford was named in 1839 after Archibald Acheson, 2nd Earl of Gosford – a friend of the then Governor of New South Wales George Gipps. Acheson's title derives its name from Gosford, a townland (sub-division) of Markethill in County Armagh in Northern Ireland.

In 1887, the rail link to Sydney was completed, requiring a bridge over the Hawkesbury River and a tunnel through the sandstone ridge west of Woy Woy. The introduction of this transport link and then the Pacific Highway in 1930 accelerated the development of the region.

Gosford became a town in 1885 and was declared a municipality in 1886.

Gosford has a humid subtropical climate (Köppen climate classification: Cfa) with warm summers and mild winters. In summer, temperatures average about 27-28 °C in the day with high humidity and about 17-18 °C at night. Winters are mild with cool overnight temperatures and mild to occasionally warm daytime temperatures with lower humidity. Average rainfall is 1333mm, much of which falls in the late summer and autumn. Records range from a maximum of 44.8 °C (113 °F) on 18 January 2013, to a low of −4.2 °C (24 °F) on 16 July 1970. 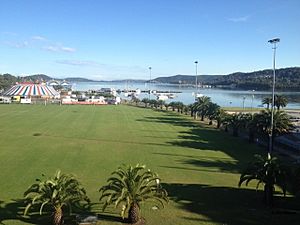 Gosford proper is located in a valley with President's Hill on the city's western border, Rumbalara Reserve on its eastern border, and Brisbane water to the city's south. Mann Street, Gosford's main street and part of the Pacific Highway, runs north-south and contains the frontage for much of the commercial district. The Central Coast Highway runs past Gosford's waterfront area, while its predecessor the Pacific Highway takes on several names through the CBD itself. Mann Street contains the main public transport links for Gosford, including Gosford railway station and the termini for several bus routes.

The Gosford CBD suffered a decline in the 1990s as commercial activity relocated to nearby Erina, particularly Erina Fair. To address this, the city has more recently redeveloped its park in the city centre, including a stream, a restaurant and outdoor performance facilities. This will be the beginning of the redevelopment of the CBD. A small number of high rise developments have also been built in the area to encourage a concentration of residents in a bid to stimulate the economy of local business. More high rise developments are planned.

A renewed period of optimism has followed several infrastructure investment projects including the full fibre optic telecommunications rollout of the National Broadband Network in 2012 in the city's CBD as well as the so-called Kibbleplex project, announced in 2013 that plans to house the new regional library, tertiary teaching rooms and associated organisations.

Gosford is home to: 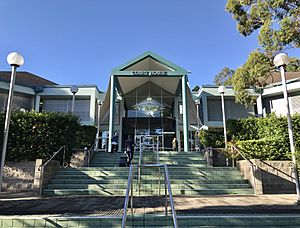 Gosford is situated along an identified business growth corridor between Erina, the West Gosford light industrial zone and Somersby. Connectivity of main roads and rail travel times between Sydney, the Central Coast, Lake Macquarie and the city of Newcastle are key issues for corporate business relocation to the region. Aged and personal care and retail are major employers in Gosford.

As an entertainment hub, Mann Street enjoys relatively good public transport links and is one of the Central Coast's most popular spots for pubs and clubs and in close proximity to cultural and sporting events.

Yacht and other boat building has been undertaken by East Coast Yachts since 1964 in West Gosford. 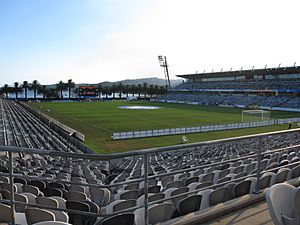 Gosford is home to:

All content from Kiddle encyclopedia articles (including the article images and facts) can be freely used under Attribution-ShareAlike license, unless stated otherwise. Cite this article:
Gosford Facts for Kids. Kiddle Encyclopedia.