The Central Coast is a peri-urban region in New South Wales, Australia, lying on the Tasman Sea coast to the north of Sydney and south of Newcastle.

The local government area of the Central Coast Council has an estimated population of 333,627 as of June 2018, growing at 1% annually. Comprising localities such as Gosford, Wyong and Terrigal, the area is the third-largest urban area in New South Wales and the ninth-largest urban area in Australia. Geographically, the Central Coast is generally considered to include the region bounded by the Hawkesbury River in the south, the Watagan Mountains in the west and the southern end of Lake Macquarie, lying on the Sydney basin.

Politically, the Central Coast Council has administered the area since 12 May 2016, when the Gosford City Council and the Wyong Shire Council merged. In September 2006, the New South Wales government released a revised long-term plan for the region that saw the Central Coast classified as an urban area, along with Wollongong and the Hunter Region. As of April 2015[update], Scot MacDonald served as the parliamentary secretary for the Hunter and Central Coast. In November 2015 both Gosford and Wyong councils controversially voted to merge following a NSW Independent Pricing and Regulatory Tribunal assessment which found the Gosford and Wyong Shire Councils did not meet the stand-alone operating criteria for the NSW State government's "Fit for the Future" plans for the Local Area Councils within the state. Despite local opposition and concerns over Wyong Shire, in effect, being subsumed within the Gosford Council, and claims of councillors being bullied into the merger, as part of the process, amalgamation into a single Central Coast local government area passed all administrative and legislative requirements and came into effect in 2016. As of mid-2020, the amalgamation process had cost $49 million. The newly amalgamated Central Coast Council held elections in September 2017.

In 1811, the Governor of New South Wales, Lachlan Macquarie, gave the first land grant in the region to William Nash, a former marine of the First Fleet. No further grants were made in the area until 1821.

The region is a network of towns that have been linked in recent years by expanding suburban development. The main urban cluster of the region surrounds the northern shore of Brisbane Water and includes the Coast's largest population centre, Gosford, stretching east to the retail centre of Erina. Other major commercial "centres" on the Coast are Wyong, Tuggerah, Lakehaven, The Entrance, Terrigal, and Woy Woy. Large numbers of people who live in the southern part of the region commute daily to work in Sydney. The Central Coast is also a popular tourist destination and a popular area for retirement. The Central Coast has significant employment including services, tourism, manufacturing, finance, building, retail and industrial. As a result, the cultural identity of the region is distinct from that of the large and diverse metropolis of Sydney as well as from the Hunter region with its mining, heavy industry and port. On 2 December 2005, the Central Coast was officially recognised as a stand-alone region rather than an extension of Sydney or the Hunter Valley.

The Central Coast has a humid subtropical climate (Köppen climate classification: Cfa), with warm humid summers and mild winters. Rainfall is spread fairly evenly throughout the year, but is slightly more frequent during autumn.

The Australian Bureau of Statistics publishes population census data and regular population estimates on the Central Coast under a Significant Urban Area. As at June 2015 the estimated population of this region was 325,082. Earlier, at the 2001 Census, the population was 304,753 with 146,926 males and 157,827 females. The median age was 41. The ABS also includes the Central Coast region population wholly within Greater Sydney.

The Central Coast has four broadcast translators across the region, located at Bouddi (between Killcare & MacMasters Beach), Gosford and Wyong (Forresters Beach),Mount Sugarloaf (Newcastle) Due to the Central Coast being split between the Sydney (metro) and Northern NSW (regional) licence areas, these translators carry stations from both areas.

The Central Coast has a number of local radio stations. The three large commercial stations are 107.7 2GO, Star 104.5, 101.3 SeaFM, all being part of national networks.

The ABC has an outreach station on 92.5 FM that operates a locally produced mid-day show from 11am to 3pm weekdays, outside this it broadcasts Sydney programming from ABC 702 AM. The community radio station CoastFM 96.3 has a considerable following as does Radio Five-O-Plus 93.3. A 24-hour Country music station TodayCountry94one is based in Gosford and broadcasts online and in syndication across the country. It also has a Christian radio station rheema fm on 94.9fm.

In most locations on the Central Coast, Sydney and Newcastle radio stations can be received at reasonable levels particularly on the AM band.

The Central Coast is not serviced by its own daily newspaper. The major publication of the region is the twice weekly Central Coast Express Advocate, published by News Limited's News Local. It is distributed free of charge on Wednesdays and Fridays in the style of suburban free newspapers.

A series of free local fortnightly papers have grown in popularity over time. The Peninsula News services the southern part of the region centred around the Woy Woy area. Coast Community News services the Central Gosford region and the Wyong Chronicle services the northern part of the region. A regional sporting paper Grandstand is now defunct. All are published by a local independent publishing house, bucking the trend in declining newspaper sales. In addition a popular monthly business publication Central Coast Business Review has been sold and published for over 20 years. 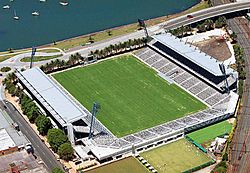 The Wyong Roos currently play in the New South Wales Cup at Morry Breen Oval in Kanwal. They are the feeder team of the Sydney Roosters National Rugby League team, who have developed an agreement to play one regular season fixture per year at Central Coast Stadium for five years, starting in 2015 where they will play the Gold Coast Titans in Round 16.

The Central Coast has numerous sporting ovals, golf courses, skate parks, tennis courts and swimming pools that are open to the public and one target shooting facility. Attempts are underway to build a series of bicycle paths. A velodrome is also open to the public at West Gosford. National parks on the Central Coast have a large range of walking paths and mountain bike trails. Water sports like sailing, rowing and water skiing are popular activities on the Central Coast lakes. Attempts are being made to attract pro golf tournaments to Magenta Shores (a new resort north of The Entrance). In 2011, the frigate HMAS Adelaide was scuttled off North Avoca Beach as an artificial reef, and has become a popular scuba diving attraction.

Other smaller local shopping centres are located throughout the region, including at Woy Woy, Umina, Kincumber, Gosford, Bateau Bay and Lake Haven.

The Central Coast is serviced by an extensive and burgeoning road system. A combination of bus and rail provide limited public transport options for locals. The region also has a number of taxis operated by Central Coast Taxis. Transport has been a constant issue for the region and has been cited as high a priority over the last 20 years in regional plans and priorities by local, state and federal government agencies, with incremental investments largely in road infrastructure. 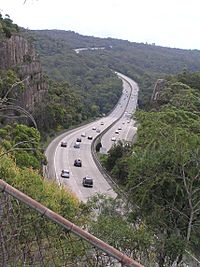 The Mooney Mooney Bridge viewed from the Pacific Highway

The Central Coast's roads are maintained by both local councils as well as state roads by the NSW government; however, due to the relatively large geography maintenance issues often arise. 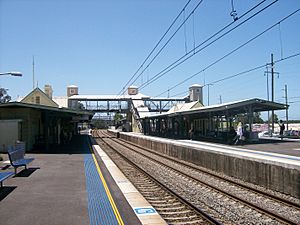 The western suburbs of the Central Coast are serviced by the Central Coast & Newcastle Line. The rail line is primarily used to provide mass transport for those that commute to Sydney and as such services are most frequent during peak commuter times (typically one hour before Sydney peak times in the morning and one hour after in the evening due to the distance). Gosford station is the central station on the line connecting with most bus services as well as taxis.

Central Coast stations on the line are (from south to north):

Trains terminate at both Gosford and Wyong stations which are also utilised by long distance services.

The Central Coast has no government-owned bus service but is serviced by three separate private operators. The private bus operators in the region are Busways which has depots at Kincumber and Charmhaven, Red Bus Services and Coastal Liner. All companies serve their own individual areas covering almost all areas of the region and rarely overlapping.

Busways operates services using Lake Haven, Tuggerah, Erina and Gosford as central points. In the south services cover as far south as Woy Woy, Umina, Ettalong and Pearl Beach/Patonga, and also stretch out to Kincumber, Erina, Avoca and Terrigal in the east. Occasional services are conducted to Kariong, then to Mangrove Mountain in the west. Busways' northern services cover from Gosford and north to Tuggerah (through the Narara Valley and Ourimbah), then continue north to Wyong via Tuggerah, which in turn services the northern section of Lake Haven, Charmhaven, Gorokan, Toukley, Noraville Budgewoi, Buff Point and San Remo. Further services also utilise routes including Blue Haven, Gwandalan, and as far north as Swansea and Charlestown in Lake Macquarie. As of February 2008, Busways have more than 50 wheelchair accessible buses in their fleet.(17 at Charmhaven, 33 at Kincumber)

The Central Coast falls in the fixed phone 43xx xxxx region and is classified Regional 1 for billing with the exception of northern suburbs Gwandalan and Summerland Point, which fall in the fixed phone region for Newcastle and Lower Hunter 49xx xxxx. Fixed-line telephone service is universally available. 3G and 4G mobile services are available from Optus, Telstra and Vodafone, though numerous black spots exist due to the topography and remoteness of some parts of the region. Steps to improve coverage areas along the railway have been announced by the Federal Government

ADSL and good quality fixed-wireless broadband services are widely available; however, significant blackspots continue to exist. High speed ADSL2 is available at most exchanges through Telstra. Few other providers exist, leading to an expensive high speed broadband offering for the region. Many areas experience very slow and/or unreliable ADSL connections due to the age and quality of the infrastructure.

Fibre optic based broadband services are available in some areas serviced by the National Broadband Network NBN. These include Kincumber, Gosford, East Gosford, West Gosford, Springfield, Berkley Vale, Tumbi Umbi & Long Jetty. Customers in these areas have 50 retail broadband service providers to choose from. Connection to the network does not cost the customer anything, though customers are expected to sign a 12 - 18-month contract. Monthly charges range from $29.50/month.

In 2011 the region was selected as one of the early roll out regions for the National Broadband Network's fibre to the premise installation which will offer stable speeds of 100/40 Mbit/s down/up load respectively. Two Points Of Interconnect (POI) are located in the region at Gosford and Berkley Vale exchanges. The regional rollout will radiate out from these two super exchanges. Services in areas around the two POI are now available. The rollout of the NBN to the remainder of the region is in question following a change of government in September 2013. Trials of fibre to the node technology are planned for Umina and Woy Woy.

All content from Kiddle encyclopedia articles (including the article images and facts) can be freely used under Attribution-ShareAlike license, unless stated otherwise. Cite this article:
Central Coast (New South Wales) Facts for Kids. Kiddle Encyclopedia.