The town occupies an area of land that is bounded by water on three sides. The Entrance gains its name from the channel that runs along much of its northern border that is the entrance to Tuggerah Lakes. The Entrance has been a popular holiday destination since the first guest house was established there in 1885.

As a beloved "holiday playground of two cities", the town continues to grow with new tourist accommodation, including the Pullman Hotel at North Entrance, the redevelopment of residential areas, and the enhancement of recreational facilities. The district's main tourist attractions are its beaches, lake and town centre. It is also suitably located for day trips to the Hunter Valley vineyards.

Settlements at The Entrance

It is believed Europeans first discovered it in 1796. It was found by Governor of Tasmania, Colonel David Collins, who had arrived on the First Fleet during the search for an escaped convict woman, Mary Morgan, who was said to be living with the Aborigines to the North of the Hawkesbury River.

The area now known as The Entrance was occupied by Henry Holden in 1828. He occupied 640 acres (259 ha) and was bounded by the Pacific Ocean on the eastern side, Tuggerah Lake on the northern and western sides and extended all the way to the current Toowoon Bay Road. Holden named the property Towoon. In 1835 the deeds were issued to John Edye Manning and he sold the land for £200 to Thomas Cade Battley who renamed the property Terilbah. Both Battley and Manning have streets named in their honour at The Entrance.

In 1850, ownership was transferred to the Taylor Family and it was referred to as Tuggerah Beach. The land remained privately owned until about 1900 when it was divided up among the twelve children of Richard Brown Taylor and Norberta Maria Gertrude (née Watkins). The Taylors donated land to the Roman Catholic Church, The Church of England and The Entrance Public School. Many streets in the area are named after them including Taylor Street, Richard Street, Norberta Street and Victoria Street.

On 15 December 1910, Karagi Receiving Office was opened. Karagi, meaning the entrance, was the Aboriginal name for the point on the south bank of the channel at the Pacific Ocean, a name which has since been officially adopted. On 1 June 1911, Karagi Receiving Office was designated a Post Office. The name Karagi was changed on 15 November 1911 and the name "The Entrance" was adopted.

In 1889 the railway line was completed from Sydney to Newcastle and tourism began to develop in the area during the late 19th century following the construction of several guest houses. The first guest house in the area was built at The Entrance North by Mr and Mrs Walter Denniss in 1885 and was called Dunleith Guest House. Bayview Guest House was the first to be opened in the Entrance and was opened in 1900 by Mr and Mrs Dening (née Taylor). Pinehurst Guest House was another that was constructed in 1903 by Les Taylor and was by far the largest at that time. By 1912, members of the Taylor family were operating four guest houses at The Entrance.

In March 1920, 200 parcels of land were auctioned after it had become clear that the land in the township needed to be subdivided. Each block of land averaged a selling price of £60 to £80, although some blocks closer to the water sold for as much as £200. Immediately holiday houses began to be built rapidly. It also resulted in a total of 15 guest houses operating soon after, including Lakeside built by Rene Johnson (née Taylor) that was the most exclusive (the building has since relocated to Wyee). Although competition was fierce, the guesthouses had high occupancy rates in the booming times. Bayview Avenue, Ozone Street, and Lakeside Parade are named after guest houses that were located at The Entrance.

Despite the growth, the area was still isolated and access was restricted to a wagon on the bush track from Gosford or by a ferry from Wyong. The area was popular among fishermen and prior to 1908 the majority of boats that travelled to The Entrance used Tuggerah Jetty, the remains of which, still exists on the shore of Tuggerah Lake between the entrances to Wyong River and Ourimbah Creek. When Wyong River was dredged in 1908, the boats would take their catch into Wyong.

Prime Minister Menzies, Mrs Menzies, and their daughter Miss. H. Menzies visited the town in October 1953. The Prime Minister spoke with the pupils at The Entrance Public School and spent the evening at the Floral Ball held at The Palm Grove Dance Hall. It was reported in The Gosford Times that "It was most probably the most magnificent floral display ever assembled ...in this district".

There was a proposal for the railway to have a branch line to The Entrance. The proposed route would have left the Main North line just south of Chittaway Creek and terminated at present day Taylor Park. There was also a proposal for a local government area to be named and centred on The Entrance. Prior to 2016, The Entrance was part of the former Wyong Shire.

The construction of Wyong Wharf allowed greater access to The Entrance and the demand for ferry transport boomed. Numerous operators took advantage of the demand and ferry's such as Wyong, Waiwera, Loongana and Maheno were making regular journeys across Tuggerah Lake. In 1922, the bush track to Wyong was opened as a road. By the end of the nineteen-twenties the ferry's were rendered obsolete by buses that could reach The Entrance quickly and cheaply.

Panoramic view of The Entrance Bridge

By the end of 1965 the traffic flow over the old bridge at The Entrance increased to such an extent the structure was under constant repair. Work began on the current two lane, concrete structure on 17 July 1967 after a successful tender by Transbridge Pty Ltd. The bridge was opened to traffic on 20 December 1968 and officially opened by the Premier of New South Wales, the Hon. Robert Askin on 18 April 1969.

The Entrance is serviced by Red Bus Services, and the town is the major terminus, with several routes terminating and beginning in Torrens Avenue. Generally, Red Bus Services run every 30 to 60 minutes from 5am to 12am. The depot for The Entrance Red Bus was on the corner of Denning Street and Blue Bay Road until the early 1980s, the site became the "St. Tropez" building. 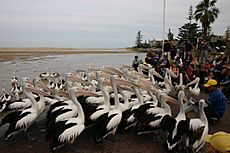 Pelican feeding at The Entrance

The Entrance Cinema is a well-known local icon. It is located on the corner of The Entrance Road and Bayview Mall. The cinema was opened as The Prince Edward Theatre in 1934 and was immediately popular due to the fire that burnt the other cinema in The Entrance, the Wintergarden Theatre in the same year. The Prince Edward Theatre closed in 1977 but was reopened in 1981 when it was purchased and converted into a smaller cinema. A second screen was added in 1988. The cinema achieved notoriety in 2006 when it refused to screen the film, The Da Vinci Code as it was contrary to the owner's beliefs.

There is a history walk along the main street and the ocean front boardwalk. This identifies with both text and photos important historic sites in the town. It is ideally suited for school groups to understand 20th century social and environmental development.

In 1999, The Entrance waterfront was named 'The Pelican Capital of Australia' by Wyong Shire Council to coincide with the opening of a pelican feeding platform as part of the waterfront redevelopment. The daily practice attracts 20,000 visitors annually. The Entrance is the perfect place for fishing. There are many species of fish that can be found in the area such as whiting, flathead, bream, and blackfish.

A classic Australian milk bar, having opened to serve patrons to the Price Edward Cinema. It features a number of characteristics including booth seating, mirror displays, sweet and lolly counters. It has been operated by "Johhny" and his family for decades. Most children from the town would have memories of getting bags of lollies from Johnies either after school or before seeing a movie. It is an important cultural aspect to the town.

To celebrate the start of the summer tourist season, held traditionally on the first full weekend in December, The Entrance holds its annual Mardi Gras festival. The first Mardi Gras was held in 1950, and as such is one of the oldest town festivals in NSW. Mardi Gras is a major event of the town and district for the year. The festival is named Mardi Gras after the spirit of the carnevals and Mardi Gras of Europe. The event contains a number of events including fun runs, concerts, fireworks and displays. The highlight is the parade. This contains numerous floats from local commercial, sporting, and community organisations.

Due to a lack of funds Mardi Gras was not held in 2013. Mardi Gras returned in 2014 with some 75 groups participating and an attendance in excess of 12 500 people. In 2015 Mardi Gras was held on the last weekend in November.

All content from Kiddle encyclopedia articles (including the article images and facts) can be freely used under Attribution-ShareAlike license, unless stated otherwise. Cite this article:
The Entrance, New South Wales Facts for Kids. Kiddle Encyclopedia.