Mount Warning (Bundjalung: Wollumbin), a mountain in the Tweed Range in the Northern Rivers region of New South Wales, Australia, was formed from a volcanic plug of the now-gone Tweed Volcano. The mountain is located 14 kilometres (9 mi) west-south-west of Murwillumbah, near the border between New South Wales and Queensland. Lieutenant James Cook saw the mountain from the sea and named it Mount Warning.

Mount Warning is the central volcanic remnant of an ancient shield volcano, the Tweed Volcano, which would have been about 1,900 m (6,200 ft) above sea level or just under twice the height of the current mountain. This volcano last erupted around 23 million years ago. As the mountain's central vent cooled it shrank, forming a depression at the top that has greatly eroded. 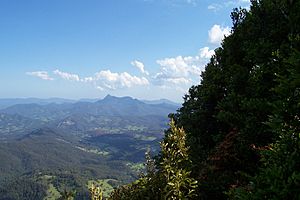 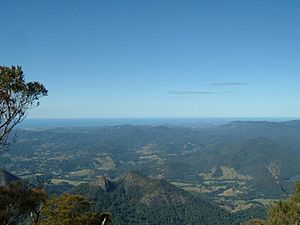 View of Byron Bay and surrounding areas from the summit

Today the vast areas that were part of the volcano include many mountains and ranges at some distance from Mount Warning, and include the Border Ranges, Tamborine Mountain, the McPherson Range and both the Lamington Plateau and Springbrook Plateaus. The erosion caldera formed since this eruption is easily visible around the summit and forms the rim of the Tweed Valley.

During the last stages of eruption, different and more resistant forms of lava that were cooler than those flows that created the shield volcano remained to form the current peak. The whole central Mount Warning massif was also pushed up by forces that remained active after lava eruptions had stopped.

Wollumbin is a place of cultural and traditional significance to the Bundjalung people and contains sacred sites, where particular ceremonies and initiation rites are performed. The summit area of the Mountain is a declared Aboriginal Place under the National Parks and Wildlife Act.

While now spelt Wollumbin, the Aboriginal word had numerous alternative spellings which are recorded in the historic record including; Walumban, Walumbin, and Wooloombin, all referring to the same place. In 1873 reference can be found to the Mountain being referred to by Aboriginal people as "Wollumbin", signifying "big fellow mountain". The Aboriginal significance of the area is contextual and dependant on direction of observance, gender, and status of whoever is telling the story. Several different stories exist about Wollumbin including reference to the Mountain as the Warrior Chief, a special place of significance for brush turkey, and the cloud catcher. Many more stories exist that are not in the public record.

The name Wollumbin refers to the whole of the central vent and its surrounding ring dykes.

The Bundjalung people observe cultural and traditional restrictions forbidding the uninitiated from climbing the mountain, and, as such, ask that others also do not attempt to climb the mountain. The government National Parks and Wildlife Service advertise this request and do not encourage climbers to hike the Mt. Warning/Wollumbin Trail up the mountain, but it is not forbidden by park regulations.

In 2005 the name "Mount Wollumbin" was removed from a peak nearby to Mount Warning by the Geographical Names Board. This mountain is also referred to as Mount Ivy and Mount Dum Dum and was believed to be named Mount Wollumbin in error. In 2006 the Geographical Names Board assigned dual naming to Mount Warning, to also be known by its indigenous name of Wollumbin. The name Wollumbin refers the whole of the central vent and its surrounding ring dykes.

On 16 May 1770, Captain James Cook was the first European to record seeing "… a remarkable sharp peaked Mountain lying inland…" from a point of land he named Cape Byron. Just five hours later while sailing North, Cook was forced to change course to the East after encountering the dangerous reefs that run 3 miles to the East from Fingal Head, now named Danger Reefs (Inner, South, and Outer reefs).

The next morning, Cook recorded:

"…We now saw the breakers [reefs] again within us which we past at the distance of 1 League [5 km], they lay in the Lat de of 38°..8' [later changed to 28°..8'] & stretch off East two Leagues [10 km] from a point under which is a small Island. There situation may always be found by the peaked mountain before mentioned which bears SWBW from them this and on this account I have named Mount Warning it lies 7 or 8 Leagues [35-40 km] inland in the latitude of 28°..22" S° the land is high and hilly about it but it is conspicuous enough to be distinguished from everything else. The point off which these shoals lay I have named Point Danger to the northward of it the land which is low trends NWBN but we soon found that it did not keep that direction long before it turned again to the northward." 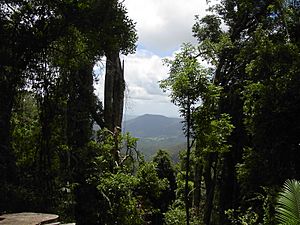 On the path to the summit

The mountain is now protected by the surrounding Wollumbin National Park, and access is regulated by the New South Wales National Parks and Wildlife Service. Mount Warning is part of the United Nations World Heritage-listed Gondwana Rainforests of Australia.

An ascent of the mountain takes approximately 1½ to 3½ hours (one way) and requires a good level of fitness. There are also viewing platforms at the summit. The total journey is 8.8 km (5.5 mi).

All content from Kiddle encyclopedia articles (including the article images and facts) can be freely used under Attribution-ShareAlike license, unless stated otherwise. Cite this article:
Mount Warning Facts for Kids. Kiddle Encyclopedia.