Springbrook is a mountain and plateau in the Gold Coast hinterland of South East Queensland, Australia. It is also the name of the associated rural town and locality within the City of Gold Coast. In the 2016 census, the locality of Springbrook had a population of 659 people. 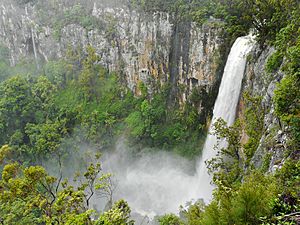 Springbrook Plateau is the remains of the Tweed Volcano—now known as Mount Warning. The plateau is an undulating elevated patch that extends north from the southern, forested heights, close to Mount Cougal, just to the east. These subtropical rainforests are part of the Gondwana Rainforests of Australia and contain the rare Antarctic beech trees. Springbrook plateau has been described as "the Switzerland of Queensland" and a unique wonder. Springbrook was widely considered to be part of the McPherson Range. As the area's geology was understood it has now come to be typically described as a distinct plateau landform. 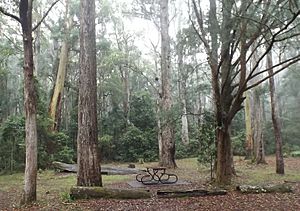 The plateau is highly visible on the western horizon from the Gold Coast coastal strip. Springbrook Plateau is in the water catchment area for Tallebudgera Creek and the larger Nerang River dammed by the Hinze Dam, a significant part of the region's water supply infrastructure. Little Nerang Creek flows into Little Nerang Dam in the north of the locality. The Natural Bridge is a rock arch and waterfall on the western slopes of the plateau. A triangulation station is located close to Mount Thillinmam at Bilbrough Lookout. Mobile reception is generally poor at Springbrook.

Beginning in 2005 the Beattie Government and Bligh Government spent $40.15  million purchasing 45 properties covering 705 hectares in Springbrook. The aim is to restore critical habitat to world heritage status and eventually expand the Springbrook National Park. The recovery process is conducted by the Australian Rainforest Conservation Society and led by Aila Keto. The land purchases have been criticised because of a lack of accountability, for pushing up land values and negatively affecting tourism by reducing the number of accommodation places, restaurants and cafes. 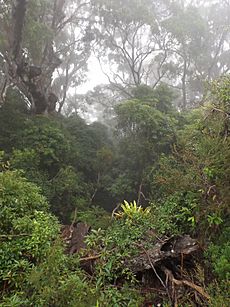 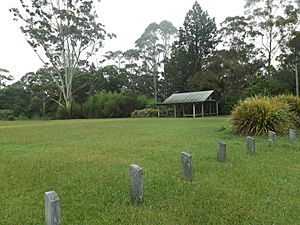 Springbrook was the site for a trial that involved 200 distributed, wireless sensors that can monitor natural conditions such as humidity, temperature, light, rainfall, fog, water quality and sound. The cutting edge technology was developed by the CSIRO to assist research into the restoration of natural vegetation.

Bush camping is not permitted in the national park. There is one camping area in Carricks Road. Springbrook is the eastern end of the Gold Coast Hinterland Great Walk. This mountain hike links to O'Reilly's Rainforest Retreat via Binna Burra.

Due to its close proximity to the coast, the high elevations and subtropical latitude, Springbrook has a wet climate with mild temperatures. 900 mm of rainfall was recorded in a 24-hour period before an unnamed cyclone crossed the coast at Coolangatta on 20 February 1954. During a remarkable rainy period, Springbrook received 1,631 millimetres (64.2 in) in the month of June 1967, while in January 2013, 1,453 millimetres (57.2 in) of rain fell over a period of just 4 days, due to the remnants of Tropical Cyclone Oswald.

The timbered plateau was settled relatively late with both the area's inaccessibility and timber reserve status acting as deterrents. In 1906, the area ceased to be a timber reserve and was opened for agricultural settlement. In the same year the first group of settlers, including James Hardy, arrived from northern New South Wales and referred to the new settlement as Springwood. Following the request of postal officials to change the name to avoid confusion with another location in New South Wales, the area became known as Springbrook. Dairying was encouraged but the settlers found farming difficult and instead cleared for the land for timber. By the 1930s Springbrook was almost completely cleared of trees. In 1911, a school opened and by 1947 a community hall had been built. Tourism has been the major industry since the 1920s, with many guesthouses opening during this period. A decent road up the mountain was built in the mid 1920s with the first car reaching the settlement in June 1926. The first declaration of a national park on the plateau was Warrie National Park in 1937. The post office was closed in 1958. A memorial to the pioneering settlers of the area was built in 1961 to celebrate 50 years since opening of the former Springbrook State School.

Springbrook was originally known as the Numinbah Plateau. Springwood was the first name chosen for the locality, however it was changed to Springbrook to avoid confusion with mail deliveries to another Springwood located in the Blue Mountains.

Springbrook has a number of heritage-listed sites, including:

All content from Kiddle encyclopedia articles (including the article images and facts) can be freely used under Attribution-ShareAlike license, unless stated otherwise. Cite this article:
Springbrook, Queensland Facts for Kids. Kiddle Encyclopedia.