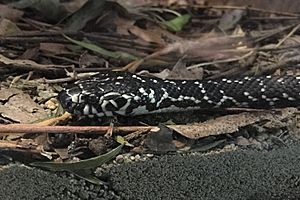 Head and neck of a broad-headed snake in captivity at Taronga Zoo Sydney.

The broad-headed snake is a small to medium-sized species of venomous snake. Fully-grown snakes attain an average maximum length of 60 cm although some records show that they can grow as large as 90 cm. They are black with numerous irregular yellow markings arranged in narrow cross-bands, which for inexperienced people can easily lead to confusion with young Diamond Pythons which are superficially very similar and found in the same habitat.

The broad-headed snake is found in the Sydney Basin in New South Wales, Australia. The snake's choice of habitat depends on temperature, age, gender, and breeding status. In the colder months, adult and juvenile snakes reside in the crevices of sandstone outcrops on exposed cliff edges to maximise warmth from the sun. When the temperature rises in spring, adult males and non-breeding females move to adjacent woodlands and forests, inhabiting hollow trees during the summer months. Juvenile snakes and gravid females remain in the rocks and move to cooler, shaded areas.

Their habitat has been degraded by urbanization, illegal rock removal, vandalisation and indiscriminate reptile collecting. The sandstone rocks that the snakes occupy are valued for landscaping purposes. Their removal has led to a loss of habitat for both the snakes and their prey.

Broad-headed snakes feed infrequently on small reptiles and mammals. Snakes in captivity are able to maintain or gain weight when fed one to two newborn rats per month. In one documented case, a snake survived a fast lasting twelve months.

Male snakes reach maturity after five years whereas females require six. Mating occurs from autumn to spring and mature females produce a litter every two years. Unlike most of its venomous counterparts, the broad-headed snake gives birth to live young. Birth occurs between January and April, with each litter resulting in 4–12 offspring born in mucous sacks. Unfertilized oocytes and stillborn offspring are common.

The broad-headed snake was once commonly found in parts of Sydney including around Sydney Harbour; however, it is currently listed as an endangered species in New South Wales and vulnerable under the national Commonwealth Legislation. Its declining numbers are the result of a combination of factors including habitat loss through urbanisation, bush rock removal and irresponsible collecting

All content from Kiddle encyclopedia articles (including the article images and facts) can be freely used under Attribution-ShareAlike license, unless stated otherwise. Cite this article:
Broad-headed snake Facts for Kids. Kiddle Encyclopedia.