Eucalyptus pilularis, commonly known as blackbutt, is a species of medium-sized to tall tree that is endemic to eastern Australia. It has rough, finely fibrous greyish bark on the lower half of the trunk, smooth white, grey or cream-coloured bark above, lance-shaped to curved adult leaves, flower buds in groups of between seven and fifteen, white flowers and hemispherical or shortened spherical fruit.

Eucalyptus pilularis was first formally described in 1797 by James Edward Smith in Transactions of the Linnean Society of London. The species name (pilularis) is a Latin word meaning "a small pill", referring to the shape of the fruit. The type specimen was collected at Sydney by Surgeon White.

Within the genus Eucalyptus, it lies in the subgenus Eucalyptus and the section Pseudophloius, a group united by rough but not stringy bark, large opposite juvenile and glossy green adult leaves. Their leaves have adensely reticulated pattern, and the seed is red-brown, and smooth and pyramidal in shape.

A taxon once described as E. pilularis var. pyriformis has been reclassified as the species E. pyrocarpa.

Blackbutt can be confused with Sydney peppermint (Eucalyptus piperita) or Sydney blue gum (E. saligna), but can be distinguished by the strong V-shape of the branch forks, which are preferred resting places for koalas. 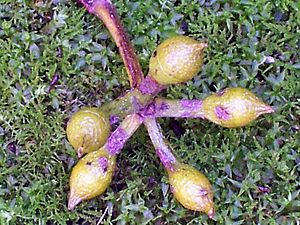 A group of 5 spindle-shaped, beaked inflorescences 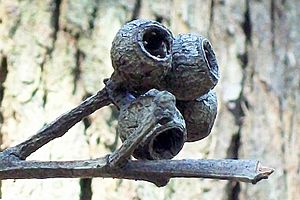 Found in wet sclerophyll or grassy coastal forests. North from Eden on the far south coast of New South Wales up to south eastern Queensland. The latitudinal range is 37.5 to 25.5 degrees south of the equator. Usually seen at low to mid altitudes, though growing at 800 metres (2,600 feet) above sea level near Wauchope, where it is a dominant species. Usually seen on coastal sandy loams, but also grows well on clays and volcanic soils. Reaches large size on drier slopes near rainforest. The rainfall range is between 900 mm and 2000 mm per year. The climate for much of the distribution range is warm and humid. The mean minimum of the coldest month is around 5 to 10 degrees C, and 24 to 32 degrees C for the hottest month mean temperature. Frosts may occur in some sites away from the coast and at higher altitude. 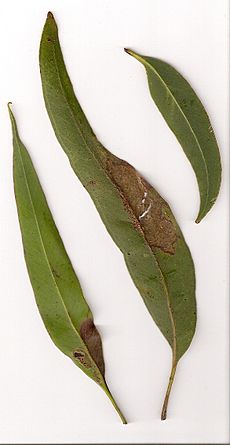 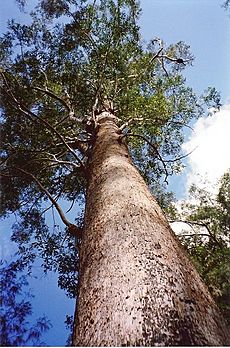 An 85-metre tall blackbutt was felled near Bulli.

Named in its honour

The towns of Blackbutt, Benarkin in Queensland and the nearby Blackbutt Range are named after the Eucalyptus pilularis.

There is also a nature reserve near Newcastle named Blackbutt Reserve, in New South Wales. There is also the suburb of Blackbutt located in the Illawarra region on the South Coast of NSW, with the Blackbutt forest reserve being the largest natural bushland reserve in the illawarra.

All content from Kiddle encyclopedia articles (including the article images and facts) can be freely used under Attribution-ShareAlike license, unless stated otherwise. Cite this article:
Eucalyptus pilularis Facts for Kids. Kiddle Encyclopedia.