Kids Encyclopedia Facts
Not to be confused with Bullio, New South Wales. 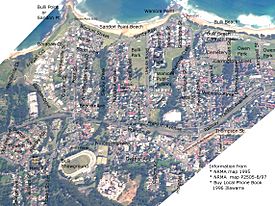 panorama of the suburb and northern Wollongong's coastline

Bulli ( BULL-eye) is a northern suburb of Wollongong situated on the south coast of New South Wales, Australia.

The Bulli Coal Company opened a mine in 1862 on the escarpment and built cottages to house miners and their families. Coal was transported by rail from the mine to Bulli Jetty at Sandon Point where it was loaded onto ships.

The miners were paid in accordance with production, they were not paid a set wage. The first trade union in the Illawarra region was formed by miners at Bulli in 1879. Management retaliated by firing and evicting union miners and hiring non-union labour.

On 23 March 1887 a gas explosion in the mine killed 81 men and boys, leaving 50 women widows and 150 children without fathers. There was one survivor, a 17-year-old boy who became known as "Boy Cope". A memorial obelisk listing the names of those who perished is situated in Park Road, Bulli, adjacent to the railway line. The mine reopened later in the year. The Bulli Mine Disaster was one of the worst in the region's history, see Mount Kembla.

The mine has since long been leveled, with only concrete foundations revealing the location of the old office area and other buildings. Hidden along the cliff behind said foundations can be found the old mine entrances. These have been sealed with up to 12 feet of concrete, with a drainage line set in the concrete. To the east is the remnants of the sorting site, a few scattered foundations and a tar patch.

The old railway line from the mine to the coast has mostly been removed, but as you drive south into Bulli you will see the bridge it was set in, now used as a walkway over the highway after a fatal car accident involving a school child saw it restored. This bridge now features a welcome sign for the historic 'black diamond' district.

Bulli Beach (pictured below) is a popular surfing spot. The northern tip (Sandon Point) is a venue for regular surfing competitions.

Bulli's main historical feature is the railway station, situated between the escarpment and the surf beaches. The station was the first on the south coast and contains a museum which is open every Sunday.

Another historic feature is the Bulli Heritage Hotel, which was opened in 1889. This is in the heart of the 'Black Diamond' district.

The Illawarra Grevillea Park is an arboretum and botanic garden which opened in 1993. It houses the repository or living collection of the Grevillea Study Group of the Australian Plants Society (previously SGAP). It is a botanic garden containing plants native to Australia – its collections include grevilleas, prostantheras and rainforest plants. Staffed and run by volunteers, it is open 6 weekends a year.

Behind the Illawarra Grevillea Park is Slacky Flat Park which is home to some reasonably undisturbed remnant rainforest and numerous species of native birds and marsupials.

At Sandon Point and Tramway Creek immediately north of the promontory, there is some remnant bushland including turpentine forest. This is an important migratory bird location and a history walk has been set up along the road were the old railway used to go. This point is also the site of a midden area. For over fifteen years the local community has been campaigning against residential development of this coastal floodplain and wetland. This included over 150 submissions to a Commission of Inquiry which recommended against further major development. Minister for Planning, Frank Sartor, however has overridden his COI to give Stockland and the Anglican Village Retirement Trust approval to add over 1000 residential houses and units.

All content from Kiddle encyclopedia articles (including the article images and facts) can be freely used under Attribution-ShareAlike license, unless stated otherwise. Cite this article:
Bulli, New South Wales Facts for Kids. Kiddle Encyclopedia.