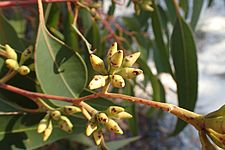 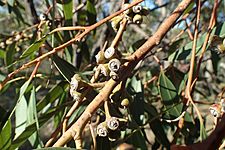 Eucalyptus resinifera, commonly known as red mahogany or red messmate, is a species of medium-sized to tall tree endemic to coastal areas of eastern Australia. It has rough, stringy or fibrous bark on the trunk and branches, lance-shaped adult leaves, flower buds in groups of between seven and eleven, white flowers and hemispherical, conical or cup-shaped fruit.

Eucalyptus resinifera was first formally described in 1790 by James Edward Smith in John White's book, Journal of a Voyage to New South Wales, from material collected by White at Port Jackson. The specific epithet (resinifera) is from the Latin resiniferus meaning "resin-bearing".

In 1990, Lawrie Johnson and Ken Hill described two subspecies, and the names have been accepted by the Australian Plant Census:

Red mahogany is found in coastal areas from Nowra in New South Wales to Gladstone in Queensland, with disjunct populations further north as far as Coen. It grows in forest on flats, valleys and gentle slopes, preferring soils of medium to high fertility. Subspecies hemilampra occurs between Taree and Gladstone, whilst subspecies resinifera occurs between Nowra and Taree, then disjunctly north of Gladstone.

Red mahogany has wildlife value as a food tree for koalas.

The timber of red mahogany is well regarded for its high quality, being very hard and heavy, and having dark-red heartwood. It has multiple uses including flooring, panelling, cladding, boat building, railroad ties and general construction. It is also a good choice for making poles and charcoal.

E. resinifera has been exported for use as a crop plant on plantations in varying locales in Africa (Madagascar, South Africa and Zimbabwe), Western Europe (Italy and Portugal), and the U.S. (Hawaiian Islands).

All content from Kiddle encyclopedia articles (including the article images and facts) can be freely used under Attribution-ShareAlike license, unless stated otherwise. Cite this article:
Red mahogany Facts for Kids. Kiddle Encyclopedia.