Nowra is a city in the South Coast region of New South Wales, Australia. It is located 160 kilometres (99 mi) south-southwest of the state capital of Sydney (about 120 kilometres (75 mi) as the crow flies). As of the 2016 census, Nowra has an estimated population of 20,039. Situated in the southern reaches of the Sydney basin, Nowra is the seat and commercial centre of the City of Shoalhaven.

The region around Nowra is a farming community with a thriving dairy industry and a significant amount of state-owned forest land. It is also an increasingly popular retirement and leisure area for people from Canberra and Sydney. The naval air station HMAS Albatross is located about 10 kilometres (6.2 mi) south-west of Nowra. The name Nowra, originally written by Europeans as 'nou-woo-ro' (pronounced Nowa Nowa by the Indigenous Australians of the area), is an Aboriginal word for the black cockatoo.

The Nowra region, south of Bomaderry Creek was inhabited by the Wodi-Wodi tribe of the Yuin nation while north of Bomaderry Creek was inhabited by the Dharawal Aboriginal people prior to European arrival. Around 1824, ex-convict Mary Reibey applied for a land grant in the Burrier area, on the southern side of the Shoalhaven River. The Nowra township was officially recognised in 1852. Less than ten years later, in 1861, a postal service was established. Also in that year, the racehorse 'Archer', trained in Nowra by Etienne de Mestre, won the first Melbourne Cup. By 1885, Nowra was declared a town.

A major landmark in the area is the house Bundanon, which began as a single-storey weatherboard structure built about 1840. In 1866, a two-storey sandstone house, made of locally quarried stone, was built immediately in front of the weatherboard house. The sandstone house features timber verandahs and is now listed on the Register of the National Estate.

Nowra is on the Shoalhaven River, which formerly hosted the Australian National wakeboarding championships, it is also a popular fishing location. The river divides Nowra from Bomaderry and North Nowra, and is bridged by the historic Nowra Bridge. The Shoalhaven river is a salt water river, although the river itself does not flow into the sea. The Shoalhaven River meets the sea through the canal that joins the Shoalhaven and Crookhaven Rivers, which was dug by convicts under direction of local entrepreneur and pioneer Alexander Berry.

With the warmest month's mean being just 22°C (71.6°F), Nowra has a humid subtropical climate (Cfa) under the Köppen climate classification, making it the southernmost city on the coastal strip to be within this climate zone, albeit an isolated one — Nearby coastal cities to the north, such as Wollongong and Kiama, have an oceanic climate (Cfb) as their warmest month's mean doesn't reach the 22°C threshold. 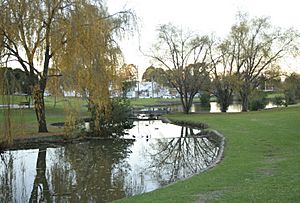 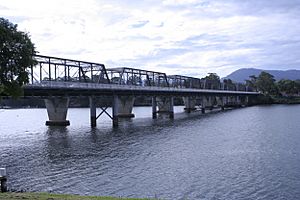 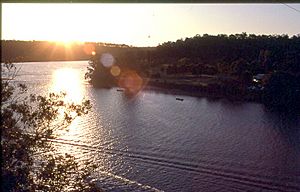 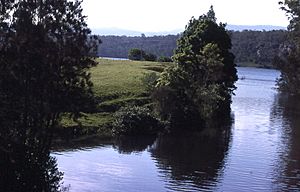 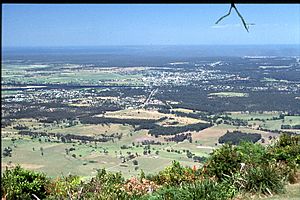 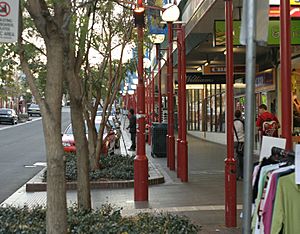 Nowra has a significantly lower level of education than typical for the state and nation. Only 8.6% of the population of Nowra hold a bachelor's degree or higher, compared to 22% of Australia and 23.4% of New South Wales. The proportion who left high school before finishing year 12 is also above average.

The top five reported ancestries in Nowra at the 2016 census were Australian (32.1%), English (29.4%), Irish (7.9%), Scottish (6.3%), and German (2.9%). Most (63.8%) people had both parents born in Australia, higher than the state and national averages; overseas birthplaces more represented in Nowra than the state average included England and the Netherlands.

Nowra Town Hall was built in 1948 and is in the Central Business District. This district contains many services, including banks, health services and a library.

Nowra has a growing tourist industry, especially in the summer months, when visitors (mostly from Sydney and Canberra) flock to the beaches to enjoy swimming, surfing, fishing, shopping, and relaxing in the restaurants and cafés.

Nowra sits in the Shoalhaven region, where there are several vineyards producing award-winning wines.

The four major codes of football in Australia are all popular in the Nowra area. Rugby union is represented by the Shoalhaven Rugby Club, who play out of Rugby Park in South Nowra. The club won the 2008 premiership in the Illawarra district competition, and has produced international and provincial players such as Andrew Walker and Alex Kanaar. Australian rules football is played by three clubs from the Shoalhaven area, with the Nowra Albatross Vikings playing at West Street Oval and the Bomaderry Tigers at Artie Smith Oval. Further south, the Bay and Basin Bombers play at the Leisure Centre at Vincentia. These four clubs are all members of the South Coast AFL, fielding junior and senior teams. Rugby league was traditionally represented by the Nowra Warriors and Bomaderry Swamprats. However, at the end of 2007 these teams merged to form the Shoalhaven Jets Rugby League Football Club.

The Shoalhaven Mariners were established in 2006 and represent the area in the sport of baseball. The team plays home matches out of Fred Finch Park in Berkeley, Wollongong. Baseball has a new venue at the South Nowra Soccer Complex. The Shoalhaven Tigers represent the area in the New South Wales State Basketball League and have won several championships from 1988 until 2007.

The University of Wollongong has a campus in Nowra, and there is a campus of TAFE NSW Illawarra Institute in Bomaderry.

Nowra has no direct rail connection, but the Illawarra railway line terminates at nearby Bomaderry railway station with NSW TrainLink operating services to Kiama and Sydney.

All content from Kiddle encyclopedia articles (including the article images and facts) can be freely used under Attribution-ShareAlike license, unless stated otherwise. Cite this article:
Nowra, New South Wales Facts for Kids. Kiddle Encyclopedia.