Ulladulla is a coastal town in New South Wales, Australia in the City of Shoalhaven local government area. It is on the Princes Highway about 230 kilometres (140 mi) south of Sydney, halfway between Batemans Bay to the south and Nowra to the north. Ulladulla has close links with the nearby historic settlement of Milton and many services are shared between these towns.

The name Ulladulla is the modern spelling of an Aboriginal word, the meaning of which is unknown. Some records show the name meaning "safe harbour" but local Aboriginal Elders dispute the meaning and point out that a harbour for boats is a modern idea. The name was corrupted to "Holy Dollar" at one time. Alternative spellings as Woolladoorh or Ngulla-dulla have been recorded. The first white Settler was Rev Thomas Kendall in 1828 who started cedar cutting at Narrawallee Creek near Milton.

The Ulladulla area is a seven-kilometre stretch of continuous urban residential development from the southern edge of Ulladulla, through the town of Mollymook, to Narrawallee in the north, terminating at the Narrawallee estuary. The estimated urban population of Ulladulla, including Milton, was 15,152 as at June 2015, having grown an average of 0.6 percent year-on-year over the preceding five years.

Ulladulla is surrounded by the adjoining towns of Milton and Burrill Lake as well as Mollymook and Narrawallee. The extended area from Burrill Lake to Milton is referred to as the Milton–Ulladulla area.

Close landmarks include Pigeon House Mountain and "The Castle", both named due to the unique shapes of the mountain. Pigeon House was sighted by Captain James Cook upon his journey along the eastern shores of Australia. Pigeon House has recently been renamed "Didhol" out of respect to the elders of the Yuin nation, the Aboriginal elders past and present who originated from the area Ulladulla was built upon. The traditional name of the peak, Didhol, means "woman's breast", from the mountain's clear resemblance to the shape of a woman's breast.

Along with the rest of the NSW South Coast, Ulladulla has a mild oceanic climate (Cfb) and experiences warm summers and cool winters. The climate is influenced by the warm waters of the adjacent Tasman Sea and is characteristically mild without extreme high or low temperatures. Climatic data has been recorded at Ulladulla by the Bureau of Meteorology since 1989. 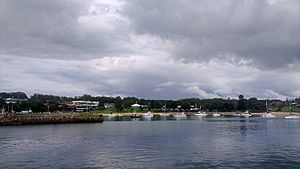 Ulladulla Harbour is a minor port administered by Land and Property Management Authority.

A wooden jetty was built in 1859 so as to retain the services of the Illawarra Steam Navigation Company; the company had informed the farmers that would not call again at Ulladulla unless better mooring facilities were provided. After seven years the jetty was replaced by a stone pier built by the government on the natural reef. The company built a store on the harbour foreshores for the receiving of produce for shipment to and from Sydney. There was a weekly cargo service to Ulladulla until the mid-1950s.

In 1873, a lighthouse was constructed on the harbour breakwater, and it was known at the time as the Ulladulla Lighthouse. It was relocated in 1889 to Warden Head, south of the harbour, where it is still active.

During the mid-1890s, a 4 ft (1220 mm) gauge tramway was laid out to the end of the main stone wharf. Manpower and horses were used to move the low wagons. During the period 1910-11, a double line of track was laid to the end of the pier. Public Works Department records disclose maintenance of track and repair of wagons at least to 1947-48. Almost all trace of the line had gone by 1991.

The harbour is the home port of the largest commercial fishing fleet on the South Coast of New South Wales.

Blessing of the Fleet festival

The Blessing of the Fleet festival has been held regularly at Easter since 1956. This is a centuries-old tradition which originated in Sicily, Italy, and has been continued by the area's descendants of the original Italian immigrant fishing community.

Although the accompanying celebration was canceled due to a sharp rise in the public liability premium in 2004 and 2005, the ceremony returned in 2008.

Premier Motor Service operate two daily service in each direction between Sydney and Eden as well as two services from Bomaderry railway station that connect with NSW TrainLink services.

Ulladulla Buslines provides local bus services on weekdays with a reduced service on Saturdays. Three routes operate from Ulladulla. Routes 740 and 740V run from Burrill Lake to Milton via Kings Point, Ulladulla, Mollymook and Narrawallee. Route 741 runs at a lesser frequency on weekdays only from Ulladulla to Kiola via Burrill Lake, Tabourie, Termeil and Bawley Point. Taxis and private hire cars are also available for transport throughout the district.

All content from Kiddle encyclopedia articles (including the article images and facts) can be freely used under Attribution-ShareAlike license, unless stated otherwise. Cite this article:
Ulladulla, New South Wales Facts for Kids. Kiddle Encyclopedia.