Harris Scarfe is an Australian department store. It sells items including clothing, pots and pans, cutlery. The store went bankrupt in 2001, but has since bounced back.

In 2004, Harris Scarfe bought the Allens group of seven department and five homewares stores. They continued to trade under the Allens name in New South Wales and the Australian Capital Territory, until 2008 when they got merged with Harris Scarfe. 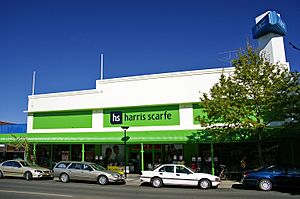 Harris Scarfe has stores located in most Australian states. In New South Wales and the ACT they used to trade as Allens. They were acquired by Harris Scarfe in 2004, but continued to trade under the Allens name. In late 2008, the name of these stores was being changed from Allens to Harris Scarfe.

Harris Scarfe sells items in two main groups, In Style (which includes all clothing) and At Home (all other goods, such as homewares & linen). The Adelaide store sells more goods than the other stores. Many of the Allens stores sell less goods than other stores.

All content from Kiddle encyclopedia articles (including the article images and facts) can be freely used under Attribution-ShareAlike license, unless stated otherwise. Cite this article:
Harris Scarfe Facts for Kids. Kiddle Encyclopedia.