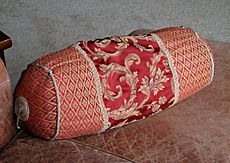 A pillow is a soft cushion that a person puts under their head when they are sleeping in a bed. A pillow is made from two pieces of cloth that are sewn together and stuffed with a soft material, such as feathers, duck down, or synthetic batting (man made soft stuffing). Pillows are usually rectangular. Pillows are covered with a fabric sheet called a pillowcase. The pillowcase protects the pillow from getting dirty. 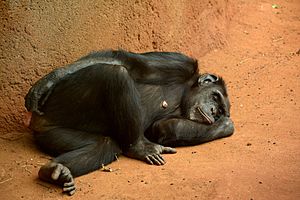 Chimpanzee using its arm as a pillow

Though the exact origin is unknown, use of pillows evolved in animals well into prehistory, the earliest examples including reptiles and mammals resting their heads on themselves, and one another, to support the head and neck. Animals, including humans, evolved use of inanimate objects in their nests out of wood and stone as pillows. Since domestication, many animals have also learned to make use of human-made pillows and cushions, as well as to rest on members of own and other species, for this purpose.

Sometime between 5 and 23 million years ago tree dwelling great apes began building sleeping platforms, including wooden pillows, to improve their sleep. According to studies on chimpanzees that sleep up to eight to nine hours a night using specifically selected ironwood pillows, sturdy pillows enabled great apes to escape being hunted by night predators and not fall out of the trees while asleep. It is likely that this was necessitated by the evolution of large, energy consuming brains. Though it may also have led to longer periods of REM sleep, that in turn increased their cognitive capacity. 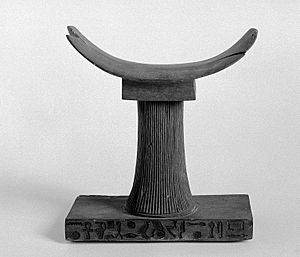 The earliest recorded use of the modern human device dates back to the civilizations of Mesopotamia around 7,000 BC. During this time, only the wealthy used pillows. The number of pillows symbolized status so the more pillows one owned the more affluence they held. Pillows have long been produced around the world in order to help solve the reoccurring problem of neck, back, and shoulder pain while sleeping. Besides for comfort, the pillow was also used for keeping bugs and insects out of people's hair, mouth, nose, and ears while sleeping.

Pillow use has been associated with the mummies and tombs of ancient Egypt during the 11th dynasty, dating to 2055–1985 B.C. Ancient Egyptian pillows were wooden or stone headrests. These pillows were mostly used by placing them under the heads of the deceased because the head of a human was considered to be the essence of life and sacred. The ancient Egyptians used these wooden or stone pillows in order to provide support to a corpse’s head, uphold body vigor, keep blood circulating, and keep demons away.

The Romans and Greeks of ancient Europe mastered the creation of the softer type pillow. These pillows were stuffed with reeds, feathers, and straw in order to make them softer and more comfortable. Only upper-class people typically owned these softer pillows; however, all classes of people were allowed to use some type of pillow while sleeping, lying down or sitting in order to give them support. People in ancient Europe started to use pillows when going to church in order to kneel on while praying and to place holy books on. This is a tradition that still lives on today. In addition, the Romans and Greeks used their pillows by placing them under the head of those deceased just like the ancient Egyptians did. 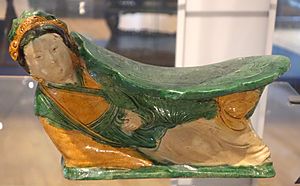 Chinese pillows were traditionally solid, though sometimes used with a softer fabric over them. Over many Chinese dynasties, pillows were made from a wide range of materials including bamboo, jade, porcelain, wood, and bronze. Ceramic pillows became the most popular. The use of the ceramic pillow first appeared in the Sui Dynasty between 581 and 618 while mass production appeared in the Tang Dynasty between 618 and 907.

The Chinese decorated their pillows by making them different shapes and by painting pictures of animals, humans, and plants on them. One common type of pottery used was Cizhou ware. Chinese ceramic pillows reached their peak in terms of production and use during the Song, Jin, and Yuan dynasties between the 10th and 14th century, but slowly phased out during the Ming and Qing dynasties between 1368 and 1911 with the emergence of better pillow making materials.

All content from Kiddle encyclopedia articles (including the article images and facts) can be freely used under Attribution-ShareAlike license, unless stated otherwise. Cite this article:
Pillow Facts for Kids. Kiddle Encyclopedia.